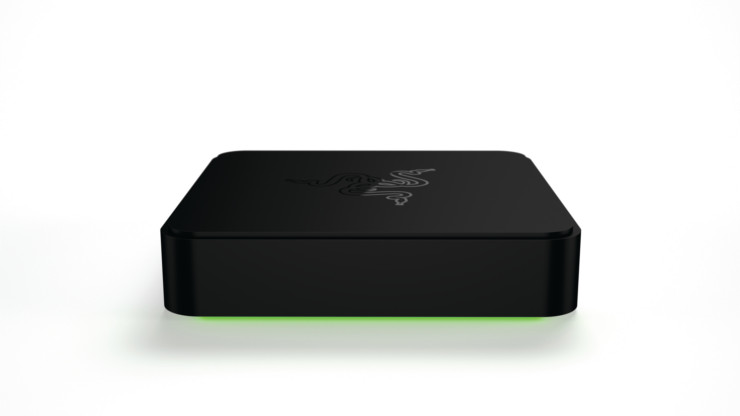 One of the major announcements coming out of the Google I/O Keynote yesterday - alongside that of the next Android revision, Android Auto and native MS document editing for Google Drive - was the Android TV. At first glance appearing to be advanced media centre-esq hardware and software with updated voice control and slick UI, the concept was turned on its head somewhat by the reveal that Razer would be developing their own micro-console version specifically for gaming.

The core of the Android TV project is the integration of an Android-based OS and more complex hardware into TVs (and set-top-boxes where necessary), allowing for a more powerful 'Smart TV' with greater capabilities. So far Sony, Sharp and Philips are amongst the manufacturers already signed up with TV models due to enter the market from late 2014. Services planned include Netflix and other video streaming apps in addition to a wide selection of Android games.

Razer, for their part, are never backwards in coming forwards when it comes to being involved in the cutting edge of gaming. Almost yearly they're releasing eye-popping concepts intended to turn conventional gaming on its head, for example the enthusiastically received but still stuck in a holding pattern Project Christine, and so it should be no surprise to seem them get on board early with new - potentially mass-market - gaming hardware.

The Razer micro-console will be a set-top box running a custom variant of the Android TV OS, and likely will be compatible with a selection of peripherals; presumably Android-based smartphones will also be able to act as touch-screen controllers. Affordability will of course be key and a particular challenge to Razer, a company comfortable with creating products for the premium market and rarely pricing themselves into the everyday gamer category. Core hardware will almost certainly be based on NVIDIA's Tegra K1, a ready-to-go and well supported solution featuring a quad-core ARM Cortex-A15 CPU and NVIDIA's own graphics hardware; other components are probably still subject to revision.

At one stage it appeared that high-quality Android videogames would go from affordable computing holy-grail to lowly pipedream, chiefly due to the failure of the Ouya and NVIDIA's focus on game streaming for SHIELD. In principle Razer getting behind the concept and also designing high-quality peripherals could give Android gaming the push needed for major developers to support it more openly. Porting classic games from older systems, as Square-Enix recently has done with SNES-era Final Fantasy titles, is another tactic to improve the ever-critical attach rate.

The entirety of Razer's press release is reproduced below:

SAN FRANCISCO (Google I/O 2014) - Razer, a provider of connected entertainment devices and software "for gamers, by gamers," announced today plans to create a Razer micro-console. The new device, powered by Android TV, will stream movies, music and other apps for large-screen entertainment with an emphasis on gaming.

Android TV is an entertainment interface that allows users to find and enjoy content on their televisions. The Razer micro-console can be navigated with a special mobile application that operates from any Android tablet or smartphone. Voice control is built into Android TV, leaving access to entertainment just a few words away.

Enhancing the gaming experience on Android devices is a key focus for Razer. Razer's experience in designing high-performance gaming systems, controllers, keyboards and mice will contribute beneficially to the device development. Gaming-related software is also an area Razer knows well. With 9 million active users registered on its platform, the company offers a range of applications for communication, performance optimization, and device personalization.

"This is a console of the future," says Min-Liang Tan, Razer co-founder and CEO. "Built on Google's incredible Android TV platform, the Razer micro-console incorporates not only hardcore and casual gaming, but music, movies and other entertainment and social applications, all on an affordable system."

Razer previously demonstrated success blending hardware and software together with the Razer Nabu smartband, a 2014 "Best of CES" winning device. Over the past two years, Razer won a combined four official "Best of CES" awards at the International Consumer Electronics Show.

The Razer micro-console is scheduled to be released this fall.