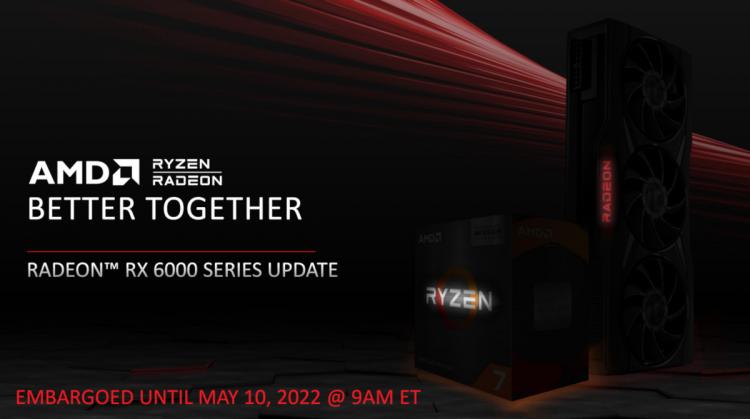 AMDs Radeon RX 6000-series debuted with the RX 6800 and 6700 almost in November 2020, leveraging TSMCs cutting-edge 7nm lithographic process and taking a massive step forward over RX 5000-series performance levels. They heralded the introduction of AMDs RDNA2 microarchitecture and their first dalliance with dedicated ray tracing hardware, but arrived at a time when silicon prices were climbing and demand was stratospheric. The range represents the high watermark of AMDs gaming GPU performance thus far, and has been a worthy rival to NVIDIAs GeForce RTX 30-series as subsequent SKUs fleshed it out over a 14 month period.

Today the red team are performing a partial series refresh of RX 6000-series by introducing three new SKUs that, while not differing materially from the 6000-series in the core underlying hardware, should boast higher performance numbers than the components they effectively replace. A good comparison from the past might be NVIDIAs SUPER 20-series variants, or AMDs transition from the RX 400 to the RX 500-series. Such refreshes can be used to offer more bang for your buck by taking advantage of manufacturing improvements, gain a marketing mindshare bump, realign their competitiveness in the market, or simply to raise/lower MSRP to reflect changes in the market over intervening periods.

These cards however are not a brand new silicon generation, and to AMDs credit theyre not being marketed as such. Well have to wait a while before RDNA3 arrives, but the new cards should tide us over until then. 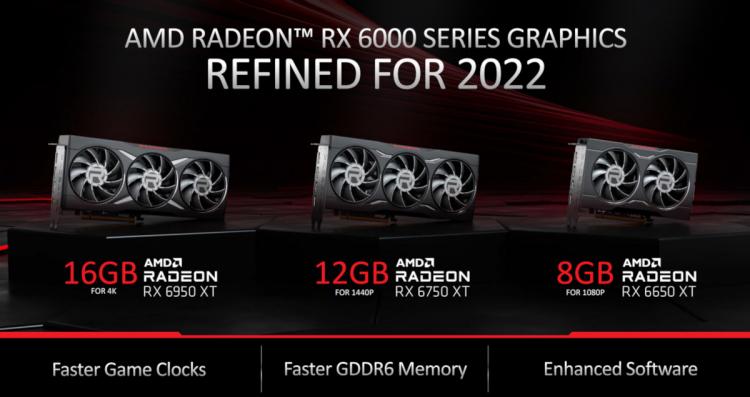 Taking position as the new halo product in the RX 6000-series is the Radeon RX 6950 XT, an update to the RX 6900 XT of December 2020 vintage. It launched with the NAVI 21 XTX GPU at its heart, a fully unlocked 80 CU (5120 shader) part, paired with 16GB of GDDR6 memory over a 256-bit bus, and operating at a Game Clock (i.e. typical operating frequency under gaming workloads) of 2015MHz. It also boasted an infinity cache of 128MB for an effective memory bandwidth of up to 1664GB/s, allowing it compete with the raw bandwidth available to NVIDIAs GDDR6X-equipped RTX 3090. 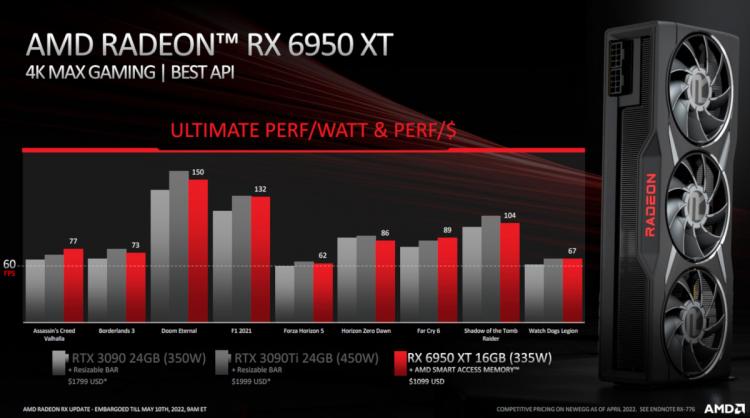 The refresh doesnt change much in this formula. Its heart is effectively the same, just operating at a target game clock of 2100MHz, but the GDDR6 memory speed has been improved from 16Gbps to 18Gbps and thus the effective bandwidth (with Infinity Cache) has been boosted to 1728GB/s. The effective cost is two-fold: its rated Total Board Power has increased by 35W to 335W, and the MSRP is up $100 to $1099. 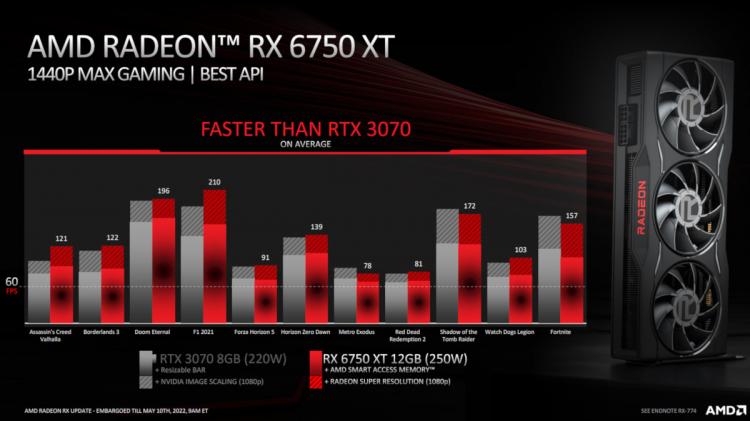 There is however a curious anomaly in the 6650 XTs specification sheet. Its reported effective bandwidth with 32MB of Infinity Cache enabled is 469GB/s, a little more than half that of the 6600 XT (which boasted 832GB/s effective memory bandwidth in its reference specifications). In this respect it more closely aligns with the RX 6500 XT, an SKU with 16 rather than 32MB of Infinity Cache, and will likely affect performance the most when resolutions beyond the 1080p boundary with high quality settings.

The root cause of this disparity isnt clear. It may merely be a change to the underlying calculation of effective memory bandwidth that better reflects the impact of 32MB IF over a 128-bit memory bus for instance. If the change is real however it will materially affect the cards performance at higher resolutions and potentially make it a worse performer than its predecessor beyond 1080p. 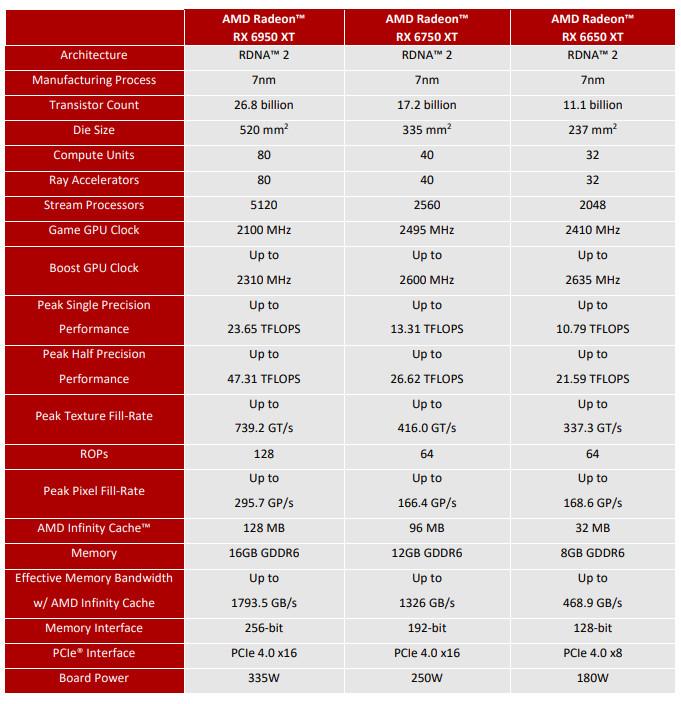 The pin-compatible nature of these like-for-like replacements in the RX 6000-series means that AMDs board partners will be able to reuse current card layout and cooler designs where they think its appropriate. Nods to higher TDP and potential boost clocks may warrant slightly more beefy coolers, particularly for the RX 6950 XT, but its likely that these new chips will find a home in a package eerily similar to one of the factory overclocked SKUs theyre effectively replacing.

This will in turn help to reduce overall costs, but that doesnt mean these cards will be hitting MSRP from day one. Availability and demand remain critical factors; despite a drop in etailer pricing for GPUs of all stripes in recent weeks, GPUs almost always command a premium margin in the first few weeks after release.

That being said, those in need of more graphics horsepower this Spring should keep their eyes open for week-1 deals, particularly of cards that the RX 6x50 XT series will be replacing in the long term.

Just last month AMD released the Ryzen 7 5800X3D, and the red team are leaning heavily on this processor in their marketing for the new Radeon cards. This new CPU based on the Zen 3 architecture has impressed reviewers with its gaming performance, often matching or surpassing the highly regarded Intel 12th Generation counterpart thanks to its capacious 96MB of L3 cache (3D V-Cache).

The 5800X3Ds architectural tweaks also make it significantly more power efficient than its closest rivals, which is a factor it holds in common with the Radeon RX 6000-series. This combination of features is one of the key selling-points AMD believe will sway those searching for a new system to their side, opting to deck out their system as a majority AMD-based platform even if the underlying technology is rooted in 2020.

A B550 motherboard, DDR4 memory and GPU close to MSRP will serve to keep the price of a new AMD platform as low as possible, while maintaining performance credentials. By the same token Intels mid-tier and entry-level CPUs are also exceptionally competitive, even if the platform currently commands a premium (particularly if opting for DDR5). 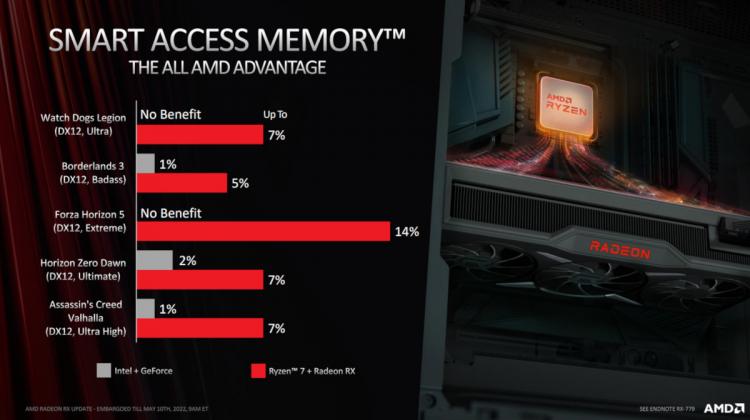 Perhaps the most disputed statements AMD are making in todays launch are those on the performance differential afforded by Smart Access Memory. A technology akin to NVIDIA Resizable BAR that allows CPUs to access the full swathe of GPU memory over the PCI-Express bus with few restrictions, AMD claim that SAM can improve performance by up-to 14% in systems that pair a 5800X3D with an RX 6950XT. However, they also state that an Intel i9-12900K system with NVIDIA RTX 3090 may only see a benefit of up to 2% when Resizeable BAR is enabled. It might be a system misconfiguration, or cherry-picking of titles, or a particularly poor implementation on the part of Intel. Either way, the debate on this particular set of data is likely to run and run.

AMD are understandably bullish about the performance users can expect from the new hardware in appropriate workloads. They claim price/performance leads in every performance band when using upscaling technology (Radeon Super Resolution vs NVIDIA Image Sharpening) and nip and tuck competitiveness when rendering at native resolutions. Some of the figures you see might not tell the whole story however.

A selection of internal test results published by AMD utilise NIS upscaling, rather than NVIDIAs potentially more robust DLSS or the hardware agnostic FidelityFX Super Resolution. They also make qualitative judgements of whats best based on whats fastest, whereas image quality matters greatly with these upscaling algorithms. Its good practice not to swallow these claims wholesale, and instead rely on the independent results that should be available on release.

More troubling perhaps is that AMD make no mention of ray tracing performance. Not all games feature the technology, but consumers should at least be expected to be interested in the breakdown of performance in games where its relevant, particularly if theyre spending at least $400 on a new GPU. Independent reviews will once again carry the day here. 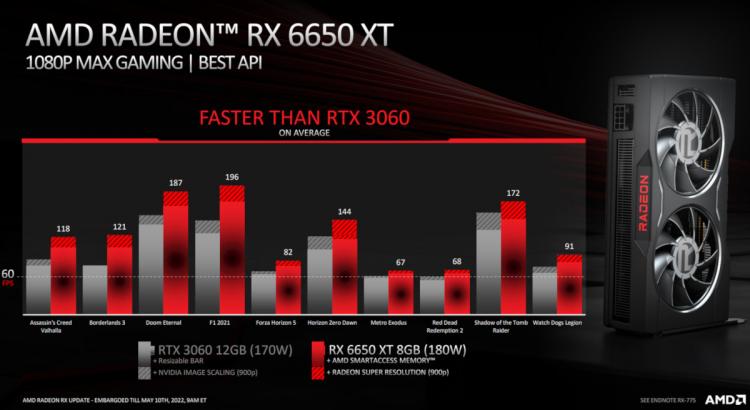 Of the three GPUs listed the RX 6650XT is the most mouth-watering proposition compared to NVIDIAs equivalent, the RTX 3060. At $399 the 6650XT opens up a clear lead from their green counterpart including double-digital fps superiority in many titles. It may not be well suited to 1440p, but does seem to perform admirably at 1080p in modern titles with all the eye candy at maximum. The bitter pill of course being that $400 is now the expected price for a card thats only really appropriate for gaming smoothly at entry-level resolutions.

AMDs GPU driver package is no longer the millstone it once was thanks to continuous incremental updates over recent years, many of which have arrived on or prior to the release of top-tier titles. They also continue to complement major driver updates with new performance and usability features, such as the recently released Radeon Super Resolution upscaling technology that's compatible with effectively every videogame playable on a Windows PC today but only supported on Radeon RX 5000 & 6000-series hardware.

These sorts of innovations and incremental improvements shouldnt be scoffed at, even if at times we recognise that they (and all manufacturers) can do better. Over the course of the last year better drivers have improved performance by as much as double-digit percentages, and perhaps even more importantly have made the day 1 gameplay experience more pleasant through smoother frame-rate and greater system stability. 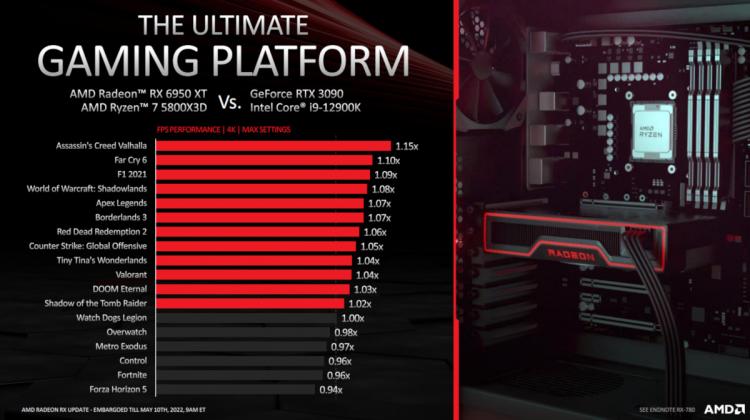 The aforementioned Radeon Super Resolution and proprietary technologies like it will be alluring to those seeking the highest frame rates from AMD hardware, but theyre perhaps not a sufficient draw on their own to sway a prospective owner from one camp to the other. Most will instead look at raw performance in scenarios similar to their own use-cases, and instead rely on the manufacturer to make it up to them if one proprietary feature has a temporary lead at the time of purchase.

The Refreshed RX 6000-series - Confirmation of a New Normal

More SKUs, more stock, more choice all of these are to be welcomed after the past two years of shortages and sky-high prices. They should in turn put pressure on their competitors to course-correct and price more aggressively, which can only be of benefit to consumers overall. 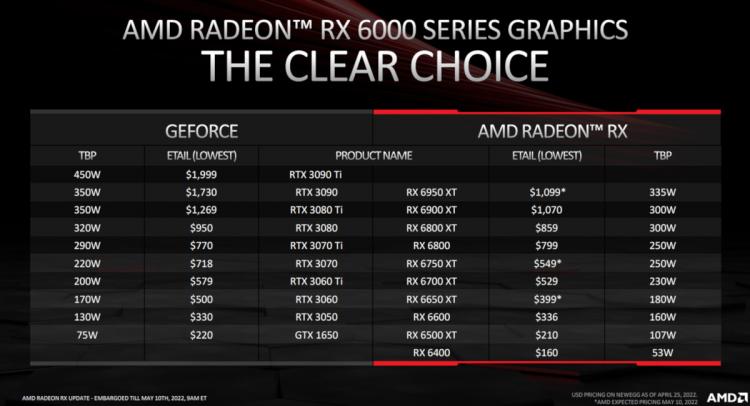 As a result, when viewed through the lens of the market as it is today, its hard not to view each of the new RX 6x50 XT cards as broadly positive developments even if they dont offer anything revolutionary. This approach might be missing the forest for the trees however.

Its hard not to read that and view the new cards, and the cards from their competitors, as priced at a level which will exclude gamers from the PC as a platform. AMD and NVIDIA might not care - the former dominate console hardware and the latter are making inroads into cloud gaming - but its disappointing to see such a drastic realignment in just a couple of generations.

Expect availability of Radeon RX 6x50 XT cards from a wide selection of AMD partners, featuring both stock and factory overclocked models, today at major retailers. Regional pricing hasnt been divulged but expect it to be higher than the listed $MSRP when converted to local currencies with sales tax/VAT applied. And above all else, ensure that you peruse independent reviews prior to purchase.