The CEO of water cooling company Swiftech, Gabriel Rouchon, has revealed that there will be a revised AMD Radeon HD 6950 and HD 6970 full cover waterblock design. This is in order to accommodate a new VRM design from AMD. 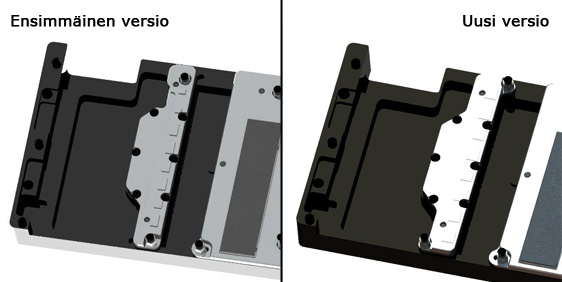 The image above shows the subtle difference in the Swiftech waterblock design.

The reason for this re-design from AMD is yet unclear, nor is the redesign even confirmed at this point. It may be speculated that the changes are due to the rumoured component shortages that may have hampered the initial Cayman release, which was delayed by 3 weeks. It did, however, come slightly earlier than perhaps AMD were ready for, and so perhaps the redesign is the original design that was hoped for.

This also may present an opportunity for AMD to lock out the shader unlocking of the HD 6950, which Vortez recently reported. We will have to wait for official confirmation from AMD and for some new Version 2 units to become available to find out for sure.