Following a period of exclusivity on XBOX the latest chapter in the rebooted Tomb Raider franchise is due to be released on January 28th via Steam and PC DVD, and developers Crystal Dynamics have finally revealed the minimum system specs for their new game. Perhaps unsurprisingly Rise of the Tomb Raider's minimum hardware requirements are fairly hefty - it's been deemed to be a 'next-gen' title on the XBOX after all, and has official screenshots to match - so those with rigs more than a few years old could struggle.

Note that these are the mimimum requirements. Crystal Dynamics have yet to reveal the recommended hardware for the game, perhaps in an effort to not scare off pre-order customers.

The most demanding component of the minimum requirements is by far the graphics. Those who have upgraded or purchased a system since the release of 2013's Tomb Raider will almost certainly be able to meet the stipulation of a GeForce GTX 650 or Radeon HD7770, but older systems sporting GTX 560's or HD5850's may struggle somewhat. More of a concern will be the 2GB VRAM minimum as not all models with these GPU types were released with this amount of memory.

By contrast, an Intel Core i3-2100 or AMD equivalent CPU is a level which most gaming systems from the past five years will meet. The Sandybridge i3's are all dual-core designs, and most mainstream AMD CPUs and APUs shouldn't have too much trouble reaching this level of performance. Similarly, if you're running a gaming system you really should be taking advantage of at least 8GB RAM and Windows 7 by now.

As with all games hanging fire until performance reviews are in rather than pre-ordering is advisable. Much as we're looking forward to Rise of the Tomb Raider after enjoying the 2013 Tomb Raider installment, the variable quality of PC ports make it slightly too risky (unless £40 is a trivial expense to you). 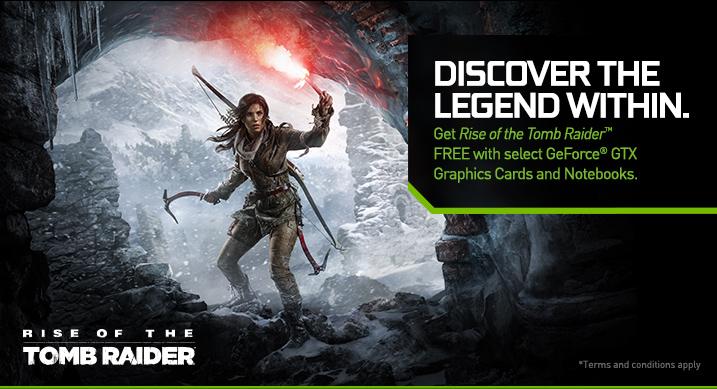 If you're in the market for a new GPU we should also remind you that Rise of the Tomb Raider is available with new GeForce GTX 970, 980 & 980Ti GPUs through NVIDIA's GeForce GTX Bundle.