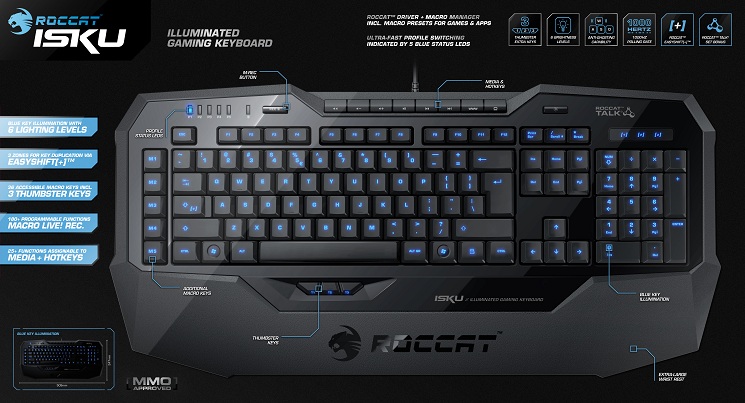 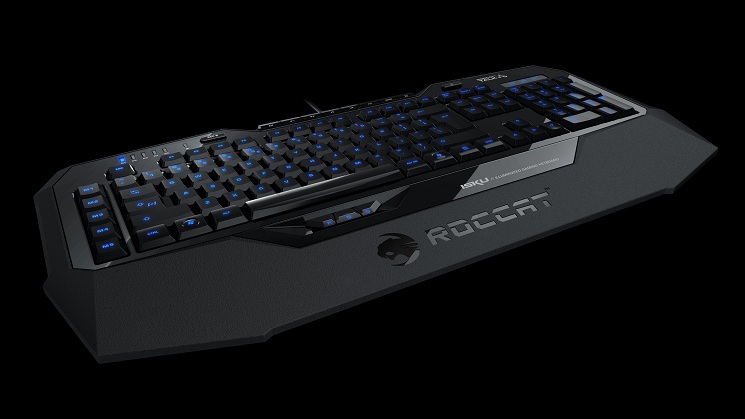 The exclusive ROCCAT Talk protocol allows the ROCCAT Kone[+] gaming mouse and the Isku to talk to each other  marking the first time a mouse and keyboard can operate in unison and opening up a wide range of unprecedented options for gamers. The Isku is the third in-house developed keyboard after the ROCCAT Valo Max Customization Gaming Keyboard and the ROCCAT Arvo Compact Gaming Keyboard.

The product of intensive research and extensive design studies, the Isku was built specifically to meet the demanding needs of todays gamers. The result is a cutting-edge keyboard equipped with a multitude of advanced macro functions. Plus, the Isku is the worlds first keyboard to feature ROCCAT Talk and Easy Shift[+]  exclusive technologies that can be combined to take advantage of exciting set bonus features.

EASY SHIFT[+] GETS ITS KEYBOARD DEBUT
The Isku is the worlds only keyboard to feature groundbreaking Easy Shift[+] technology, which offers 36 easily-customizable macros strategically positioned in three locations in the easy-to-find WASD zone. This means gamers can enjoy twice the number of functions for keys in the zone and can issue orders quickly and easily without ever having to re-adjust the hand position.

Whats more, setting macros with Easy Shift[+] is as easy as typing an uppercase letter. The Caps Lock key -- normally of no interest to any gamer  is the default Easy Shift[+] key, but gamers can also use one of the M1-M5 macro keys, or one of the three Thumbster keys conveniently located below the spacebar. The 28 easy-to-reach macro keys offer up to 180 directly-executable functions. Favorite settings can be saved in five instantly-loadable profiles. Thanks to advanced anti-ghosting, multiple keys can be depressed simultaneously, while the 1000Hz polling rate ensures ultra-fast keyboard response without any lag.

ROCCAT Talk also allows for more effective use of special functions on the Kone[+] gaming mouse. For example, for the first time ever a gamer can easily execute critical functions such as EasyAim by pressing a keyboard key  offering the simplest and most convenient way ever to achieve pinpoint accuracy in sniper mode. Its even possible to set the Easy Shift[+] key or button to remain active until toggled off.

AWARD-WINNING MACRO MANAGER
The Isku comes with the incredibly popular Macro Manager program, which gives gamers an additional way to easily record and edit macros using an intuitive, menu-based interface. Macro Manager even features presets for top PC games -- as well as several office apps  so users can get going with their favorites right away. Plus, the new Loop Function makes it possible to repeat macros up to an incredible 255 times.

EXTRA-LARGE WRIST REST FEATURING THUMBSTER KEYS
The Isku offers an Integrated Extra-Large Granular Wrist Rest, which allows for fast yet controlled movement and a secure and solid grip -- all thanks to its special surface texture. This makes it perfect for comfortable gaming, even during extended sessions. Plus, three freely-configurable Thumbster keys built into the wrist rest can be assigned individual functions -- letting gamers put their thumbs to optimum use.

IMPROVED PROFILE MANAGEMENT
Players can save their favorite gaming configurations in one of five game profiles -- and link them to various games and apps -- allowing button configurations, lighting preference, DPI settings, etc. to be loaded automatically and instantaneously when a game starts. The Isku also offers ultra-fast profile switching and even features five LED status lights that clearly indicate the profile in use. Plus, when a gamer finishes playing, the Isku automatically switches back to a Windows profile, quickly loading all the previously-selected default settings.

On top of that, the famous ROCCAT Voice announces every profile change, thanks to exclusive Sound Feedback technology.

BLUE KEYBOARD ILLUMINATION
ROCCAT has equipped the Isku with an intelligent illumination system offering six adjustable brightness levels -- so gamers can hit the right key in any lighting. The Light Timer function also lets gamers configure energy-saving settings -- and will even switch off the keyboard illumination after a user-determined amount of time if no keys are pressed.

8 MEDIA & HOTKEYS + 12 CONFIGURABLE F-KEYS
The Isku features a row of eight fully-configurable media keys optimally positioned at the top of the keyboard -- for quick and easy access to 25 handy functions. It also features 12 programmable F-keys, for a full range of customization options.

INTEGRATED CABLE CHANNELS
Cable channels under the keyboard ensure optimal desktop cable management. Headset and mouse cables can now be easily tidied away, signaling the end of that all too familiar problem of cable mess.

The ROCCAT Isku Illuminated Gaming Keyboard will be available from September 2011 for the MSRP of 79,99.

Blue key illumination with 6 brightness levels including off setting

There are currently 1004 user(s) online:
Google