Today AMD are announcing an expansion into the professional workstation market through their established Threadripper CPU brand. Threadripper PRO 3000-series processors take advantage of the Zen 2 architecture to offer from 12 to 64 CPU cores and up to 128 threads for unrivalled performance in a single unified professional workstation platform. Processors are launching today exclusively within Lenovo's Thinkstation series, and complements the current selection of Ryzen PRO laptops for business.

Although processor specifications vary, the Ryzen Threadripper PRO platform as a whole supports 128 PCIe 4.0 lanes and up to 2TB of DDR4 ECC UDIMM, RDIMM or LRDIMM RAM. These features alone strike a contrast to non-PRO Threadripper solutions, which are more closely aligned to consumer markets, and the less advanced Intel XEON W lineup. The range also supports AMD's PRO Technologies for system management and security, an advantage exclusive to AMD's products for business.

The range is extraordinarily simple compared to their competitors. Four models line up against dozens with multiple motherboard and socket solutions inherited from desktop and server designs. The feature set too is straightforward, with a core set of class-leading features available throughout rather than a patchwork of support depending on the niche the processor would occupy.

AMD 3rd Generation Ryzen Threadripper PRO processors are based on the Zen 2 architecture and manufactured using TSMC's 7nm lithographic process. They share many of the hallmarks of other Zen 2 processors including a chiplet design that features Cores Dies (CCDs) and a single IO Die (IOD), which has helped to reduce overall cost compared to monolithic processors designs.

Ryzen Threadripper PRO 3995WX CPUs are the worlds first 64-core/128-thread workstation processor. They sit within a 280W TDP envelope, in common with the rest of the PRO lineup, and feature a capacious 288MB of cache (L2 + L3). The processor clocks up to 4.2GHz from a base of 2.7 GHz, ensuring excellent multi-core performance without compromising lightly-threaded operatio, and brings to the table performance comparable to two Xeon Platinum 8280 processors working in tandem in many applications.

The Ryzen Threadripper PRO 3945WX meanwhile is a new entry-level point for the Threadripper PRO 3000-series. Only 12 CPU cores are active on this processor for a total of 24 independent threads, allowing the chip to operate at a base clock of 4.0 GHz and boost to 4.3 GHz. It is the world's first 12-core, 4GHz workstation processor, which may also be important for software solutions licensed on a per-core rather than per-socket basis. 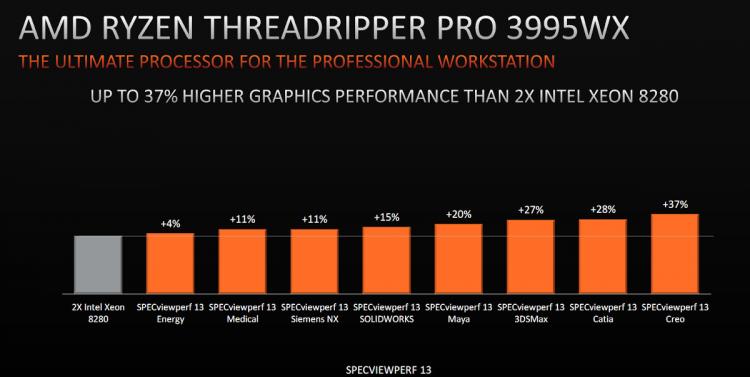 The series is rounded out by 16 and 32-core models, the final members of a quartet of processors at variable performance levels and with features not available elsewhere. Ryzen Threadripper PRO processors are single-socket solutions for discrete workstations, maintaining clear distinctions between it and server-class solutions also available from AMD.

Lenovo's Thinkstation P620 launches today as the exclusive place to find the Ryzen Threadripper PRO 3000-series. The team are also working closely with ISVs including Adobe, EPIC and Autodesk to optimise performance in key heavy workload applications from data analysis to application compilation, whether they are suited to single or multi-threaded implementation.