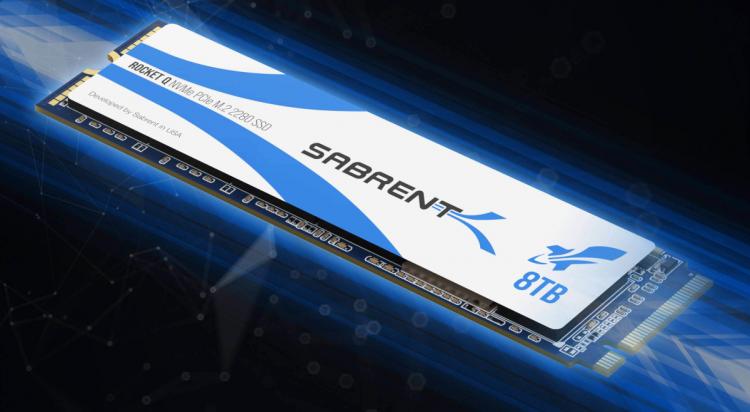 Sabrent are one of a small number of unassuming NVMe storage manufacturers who stay out of the limelight, letting their numbers do the talking. Customers who have been on the look-out for upgrades will have been concerned with two in particular: high storage bandwidth and great price; for over a year Sabrent have been quietly at the forefront of both. They were also one of the first to release M.2 storage conforming to the new PCIe 4.0 standard as part of their primary Rocket line, putting them among the pace-setters for their emerging market currently exclusive to AMD-powered platforms.

Speed isn't the be-all and end-all however. Storage capacity still plays a role, even if mechanical HDDs continue to have the market cornered in the most affordable capacious solutions. In that vein Sabrent have taken the step of revealing an 8TB variant of their Rocket Q PCIe 3.0 NVMe SSD, combining the potential for exceptionally high speeds with a new high water mark in space. Physically however the drive still fits in the industry-standard M.2 form factor (2280 to be specific), the same as the rest of a lineup that includes 1TB, 2TB and 4TB models. They do not disclose whether it is a single or dual-sided module.

Performance figures haven't been revealed thus far but both 2TB and 4TB variants could officially reach 3200MB/s read and 2900MB/s write rates. The Rocket Q 8TB is unlikely to exceed these numbers, but could rival them.

Despite recent reductions in the cost of NVMe M.2 SSDs the 8TB Rocket Q will remain something of a premium product. The startling storage density of Sabrent's 4TB model means it can command an MSRP of $759.99; their 8TB model could easily exceed twice that figure. That said, the official price hasn't been disclosed.