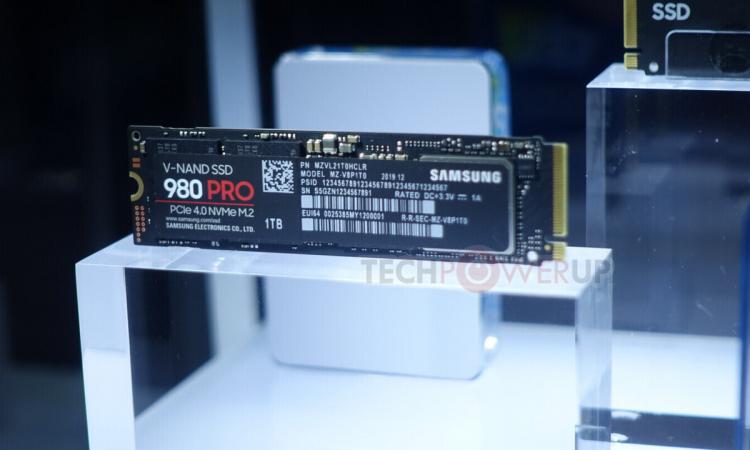 Samsung's 970 PRO series enjoyed great success as a flagship drive in the Korean firm's broad SSD lineup, and was widely understood to be the highest performing drive range in the waning months of the PCIe 3.0 generation. The launch of AMD's 3rd Generation Ryzen processors with PCIe 4.0 shook up the market last year, and competitors were quick to launch components which could take advantage of the new bandwidth available to M.2 drives and scrape the top spot. Now it appears that Samsung are putting the finishing touches to their response, the new 980 PRO PCIe 4.0 M.2 NVMe SSD.

A recent post on Reddit spilled the beans. Samsung's new range of SSDs has cleared Korean regulators, and is expected to arrive in three capacities: 250GB, 500GB and 1TB. The capacities are limited for a reason - Samsung is effectively the only manufacturer to retain use of MLC NAND on their flagship performance-class SSDs, which restricts the number of bits stored per cell to two (rather than three in TLC and four in QLC) but improves performance and write endurance. Drives sizes beyond 1TB are expected in upcoming 980 EVO drives, which likely won't have quite the same level of performance.

Reports are that the Samsung 980 PRO will be capable of sequential read speeds of up to 6,500 MB/s and up to 5,000 MB/s writes, putting it at the top of the current consumer SSD totem pole and significantly breaching the conventional ~3.5GB/s limit seen on PCIe 3.0 drives. To reach these speeds a new custom memory controller will need to have been designed, pushing development costs higher. You will be expected to pay something of a premium for this however; the Samsung PRO M.2 SSDs have never been an 'affordable' option.

It's believed that the Samsung 980 PRO should launch in the next few months.