Samsung Electronics, today introduced the Samsung 970 PRO and EVO, the third generation of its industry-leading consumer solid state drive (SSD) lineup. Having led the market with the first consumer-focused NVMe SSD in 2015, Samsung continues to push the performance barriers with this latest generation of SSDs that are built for tech enthusiasts and professionals so that they can enjoy higher bandwidth for intensive workloads on PCs and workstations.

"Samsung has led the NVMe SSD industry since its inception, and the company continues to define the latest standards of consumer storage with unprecedented performance of the 970 PRO and EVO SSDs," said Un-Soo Kim, senior vice president of Brand Product Marketing, Memory Business at Samsung Electronics. "The 970 series sets a new bar in all aspects for the NVMe SSD market with groundbreaking performance, superior reliability and best-in-class capacity."

The Samsung 970 PRO and EVO are designed based on the M.2 form factor standard and with the latest PCIe Gen 3×4 lane interface. The 970 series maximizes the potential of NVMe bandwidth, delivering unparalleled performance for processing large volumes of data, including 3D, 4K graphics work, high-end games and data analytics. 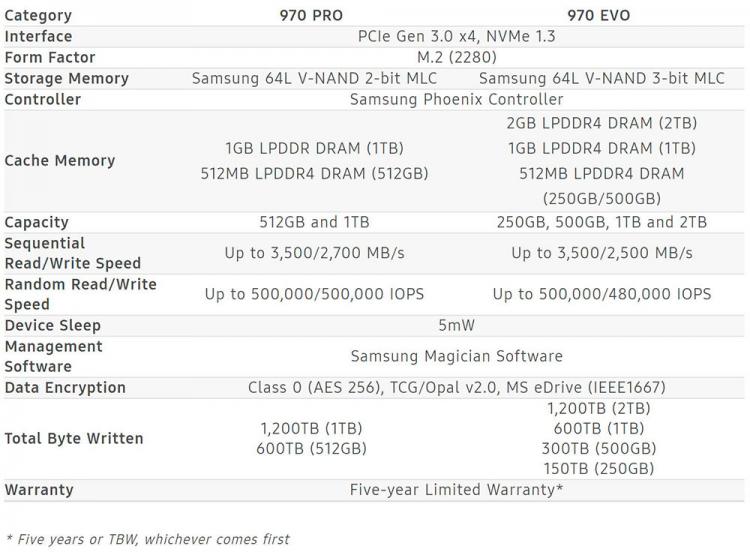 In addition to the advancements in performance levels, the 970 PRO and EVO deliver exceptional endurance and reliability. Featuring a five-year warranty, or up to 1,200 terabytes written - 50 percent higher than those provided for the previous generation7 - the 970 PRO and EVO are built to last. The Dynamic Thermal Guard technology safeguards against overheating by automatically monitoring and maintaining optimal operating temperatures, while a heat spreader and new nickel-coated controller further lower the SSD temperatures.

The 970 EVO will be offered in 250GB, 500GB, 1TB and 2TB8 capacities, and the 970 PRO in 512GB and 1TB capacities. The 970 PRO and EVO will be available for purchase worldwide starting May 7, 2018, with manufacturer's suggested retail prices starting at $329.99 and $119.99 USD, respectively. For more information, including warranty details, please visit www.samsung.com/SSD