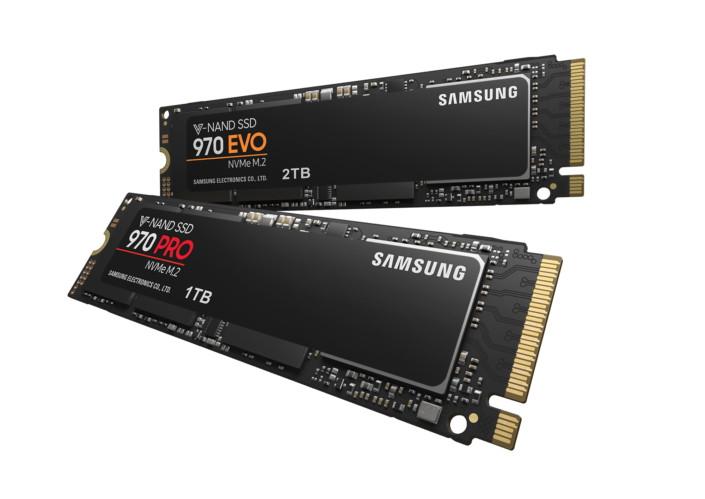 Launching today is Samsung's latest performance consumer SSD for the gaming, prosumer and content creation market. The Samsung 970 EVO is an evolution of the 960 EVO within the M.2 form factor, improving on key aspects such including performance, durability and reliability to offer a new alternative in capacities up to 2TB. Starting from £100.97 for the 250GB version, they enter an already extremely competitive market with Samsung recognised as market leader.

The Samsung 970 EVO is a 2nd generation 3-bit MLC NVMe SSD, which means you can expect high performance out the gate well in excess of SATA III limitations. The drive exploits up to four PCI-Express lanes available through modern M.2 interfaces and a new Phoenix storage controller for blistering sequential read speeds of up to 3,500MB/s and writes in excess of 2,300 MB/s (depending on drive capacity). Gamers and in particular video content creators should be able to thrive on what the drive brings to the table.

All variants of this 970 EVO series sit within the 2280 M.2 form factor, and are compatible with M.2 Gen 3. Earlier generations of M.2 utilising fewer PCI-Express lanes may limit the speed of the drive.

Performance is improved in particular due to the new storage controller, dubbed Phoenix. It replaces the Polaris controller present on the 960 EVO, and once again features five cores with one dedicated to host-controller communication. The cores however run at higher clock speed, reducing bottlenecks and allowing for higher overall read and write bandwidth.

This performance increase isn't limited to single queue depth scenarios. Samsung claim improvements across the board, from QD1 up to QD32, versus their prior design; not too shabby. The drive is also augmented by Intelligent TurboWrite, an algorithm which utilises a static 4GB SLC buffer and dynamically allocates up to an addition 18GB* from the main storage depending on workload. Even more noteworthy is that Intelligent TurboWrite doesn't impact on drive write durability.

And it's in write durability where the 970 EVO really advances over the previous generation. Thanks to the use of 2nd generation 3-bit MLC NAND, write durability increases by 50% across all capacities, while also maintaining the general 5 years warranty applicable to this class of Samsung SSDs. Coupled to that are small tweaks to the design that mitigate the negative profile of M.2 storage on cooling - adding a new nickel layer over the Phoenix controller and a thin copper layer under the drive ID sticker for incremental improvements that maintain peak performance. 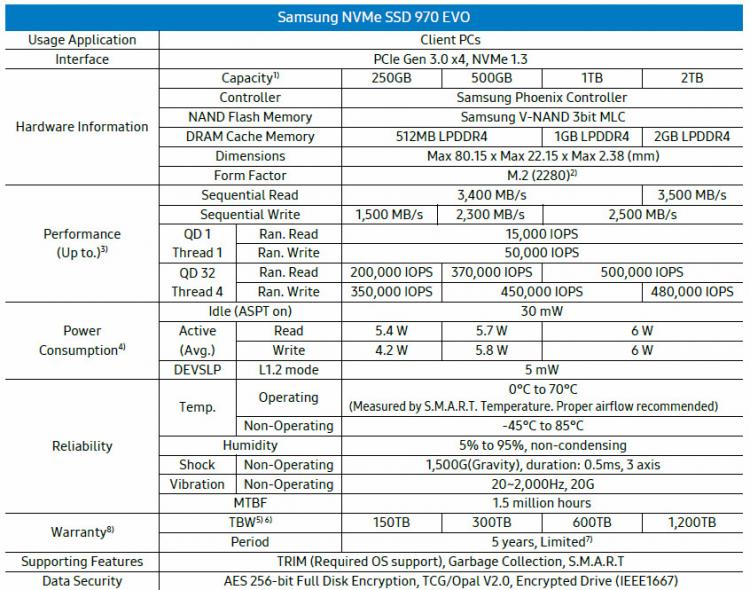 The Samsung 970 EVO is available today at the following suggested retail price in the UK:

For more information on the 970 EVO as well as links to other Samsung storage solutions for consumers and professionals visit Samsung.com.


* requires >18GB free space on the drive to utilise