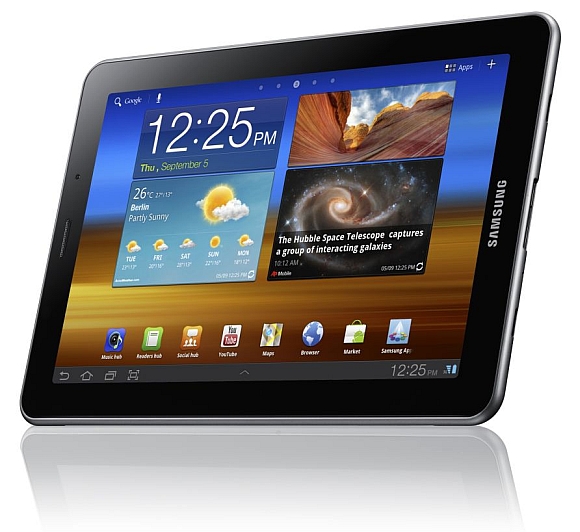 On Friday, a court in Dusseldorf ruled in favour of Apple and has banned the sale of Samsung Galaxy tablets in Germany. In light of this Samsung has said:
"Samsung respects the court's decision... and therefore decided not to display any more the Galaxy Tab 7.7 in the IFA,"


This latest revelation is part of an on going legal battle between Apple and Samsung over a matter of patents. In August this year there was a temporary ban on the sale of the Samsung Galaxy Tab 10.1. Apple is adamant that Samsung has copied their smartphone and tablet designs (rectanagles with rounded edges?), while Samsung has made a counter claim about wireless technology.

Samsung had hoped to display the new Galaxy Tab 7.7 at the IFA along with several other new products however it now appears they will miss that chance. The IFA is one of the most important exhibitions for companies looking for European consumers. Samsung has said that they will take all available measures to maintain a presence in the European market while others have spoke out saying that it severely limits the consumer choice in Germany.

Patent Mad
It seems that Apple aren't letting up in the issue of patents either as in the recent case against HTC they tried to claim that Andy Rubin got inspiration for the Android framework while working for Apple, thus infringing on their API patents. Ironically Apple lawyers are now starting to complain about Google's aquisition of Motorola, claiming that it is 'anti-competitive' and that Android phone makers are 'abusing the patent system'.

One thing is for sure, Apple have risen to the heights of success and are making a lot of enemies, It will not be too long before their enemies band together and push them off.