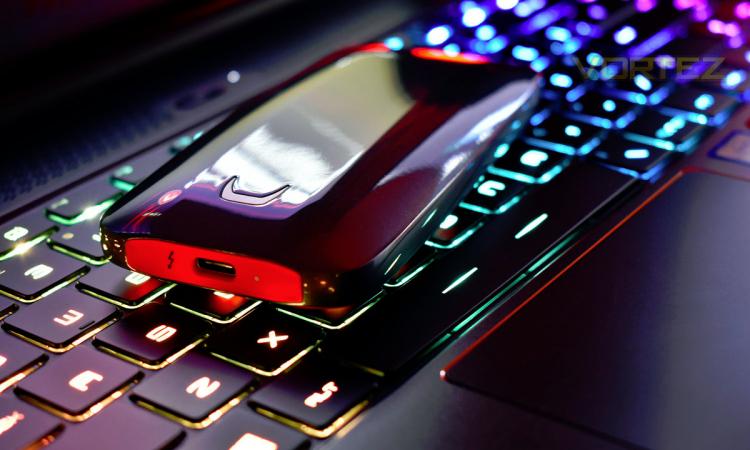 The consumer desktop storage market has been one of the great home computing success stories of the past half decade or so. The transition from SATA to NVMe has brought with it astonishing new levels of performance, while NAND pricing and new technologies have made each drive all the more affordable. Replacing a mechanical HDD with a new SSD remains the best boost to performance you can bring to a system, bar none. That being said, external storage has languished somewhat.

This week Samsung are finally shaking up external storage norms by releasing the Portable SSD X5, pushing performance and capacities to new levels on par with high-speed desktop lines. Addressing demand in the prosumer market, especially among creative professionals, the X5 offers bandwidth up to 2800 MB/sec Read & 2300MB/s Write, alongside capacities up to 2TB. Yes, NVMe is coming to the thumb drive market.

Samsungs desktop M.2 SSDs are some of the highest rated on the market, so it should come as no surprise that theyre bringing their A-game to their external drive range. However with a 10 Gbps limit on the USB 3.1 protocol it was necessary to look elsewhere for a I/O interconnect. Of course, one immediately fit the bill - Intels Thunderbolt 3 is capable of 40Gbps, and utilises a USB 3.1 Type-C connector. Thunderbolt also utilises PCI-Express signalling natively, much like M.2 NVMe drives, potentially making driver development more straightforward.

Unfortunately that does necessitate some tradeoffs, the most significant of which is a lack of backwards compatibility. As a Thunderbolt 3 drive it will not be recognised through non-Thunderbolt I/O, including standard USB 3.1 connections. For now, that pushes it out of the hands of standard consumers.

That being said, Thunderbolt 3 is ubiquitous amongst the creative industries thanks to the use of Apple PC hardware, even though the technology is significantly less common on Windows PCs. Creative are also more likely to value both the performance potential and capacities of the drive, not least due to the huge file sizes and lack of upgradeable internal storage on many Apple laptops. High performance Windows PC computing, both on the HEDT Intel X299 platform and enthusiast notebooks, also commonly offer Thunderbolt 3 as an option natively or via add-in card.

Furthermore, last year Intel announced plans to open up Thunderbolt 3 licensing to 3rd parties, potentially paving the way for more TB-enabled motherboards at more affordable ends of the market. That, of course, remains to be seen, but might have factor into Samsungs decision-making process.

The drive itself fits in a compact 120mm x 62mm footprint, and is only 20mm thick. With at weight of just 150g it truly is a pocket thumb drive with massive amount of punch. It also supports AES 256-bit hardware encryption for just that little bit of extra security should it be necessary. Its backed by a three-year limited warranty.

For more information visit Samsung.com and dont forget to check out our launch-day review here.