Sea Of Thieves Has The Most Comprehensive System Requirements Chart Ever 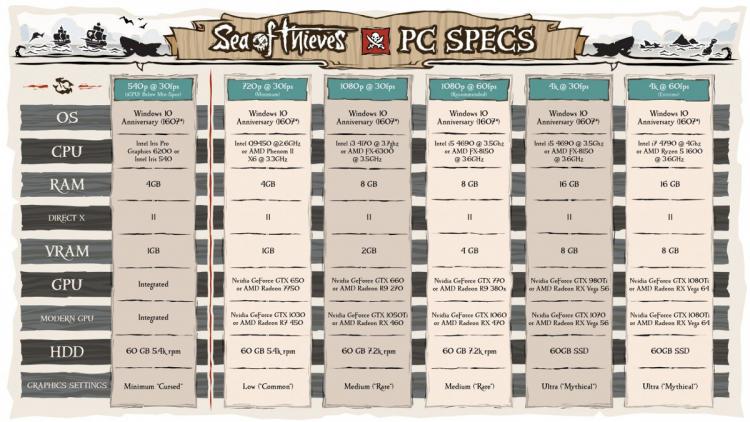 Look at that. Beautiful, isn't it? Sea of Thieves - developed by Rare and published by Microsoft - is set for release next month and the fine folks have presented fans with perhaps the most comprehensive system recommendation chart ever for a PC videogame. Not only does it lay out their suggestions for what you'll need at each quality and resolution level in terms of current hardware, but for a couple of GPU generations ago too. Now that's dedication to the cause.

The chart really speaks for itself so we won't delve into too much detail. At no point does any recommendation seem unreasonable, although we should say that it's a little surprising to see GPUs such as the GTX 770 and GTX 1060 - which you expect to be rather disparate in performance - be recommended at the same quality level. As it stands, the biggest hurdle to 1080p60 gameplay will likely be the 4GB VRAM GPU requirement, rather than other more typical limitations.

Oh, and if you're willing to slum it below the minimum spec you can apparently run the game on an integrated GPU at 540p30. That's going to make for some fun testing.

Sea of Thieves will be released on March 20th for Windows 10 and XBOX One.