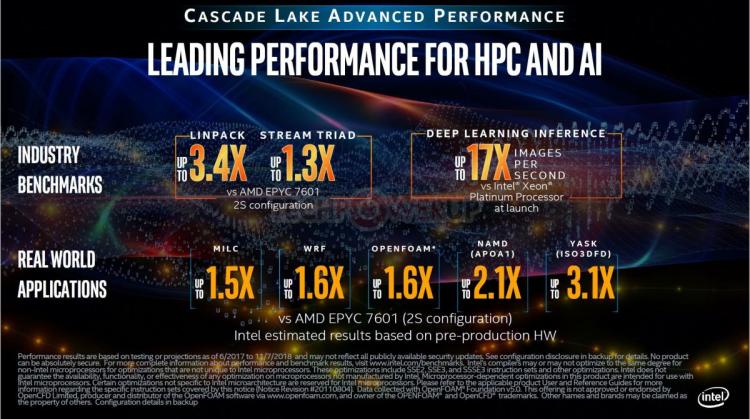 Intel's Cascade Lake update for their Xeon processor portfolio was formally unveiled last week as a response to AMD's inroads into the server and enterprise market. A complex beast, the CPU package incorporates two Skylake-SP CPU dies for a total of up to 48 cores per chip, superficially similar to AMD's EPYC and Threadripper Multi-Chip-Modules (MCM's) implementation. Supporting 12 DDR4 channels and an unconfirmed number of independent threads (Hyperthreading support isn't specified), it's a beast of a processor that minimises the physical footprint of a many-core system.

Following up on this, Intel have taken the step of releasing more performance numbers for the platform, comparing it with AMD's current crop of EPYC CPUs and the flagship launch options for Intel Xeon Platinum Processors. It's worth remembering that these numbers are pure performance, rather than comparing configurations with similar total cost of ownership numbers. 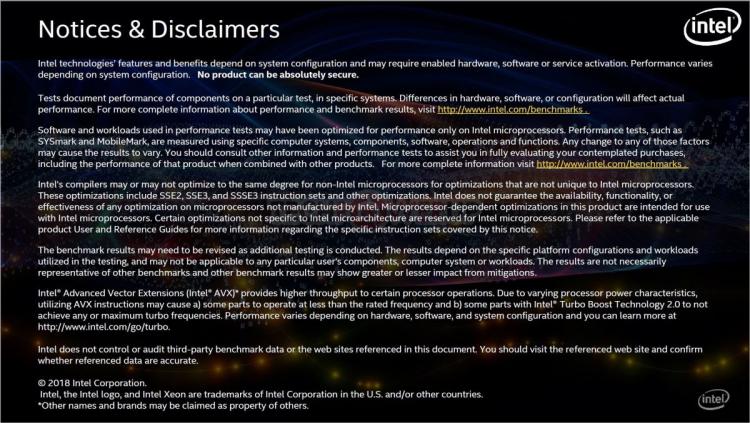 And so the question is 'are they fair comparisons'? If you delve into the disclaimers it makes for quite interesting reading. The LinPack Stream Triad figure, for instance, is a projection of results for Cascade Lake performance based on pre-production hardware against real performance with two AMD EPYC 7601 CPUs with SMT disabled. That's a hedge wide enough to border a medium-sized allotment, and doesn't mention power draw comparisons. Still, 3.4x performance is huge for two flagship solutions sitting in similar physical footprints if it translates to the real world. 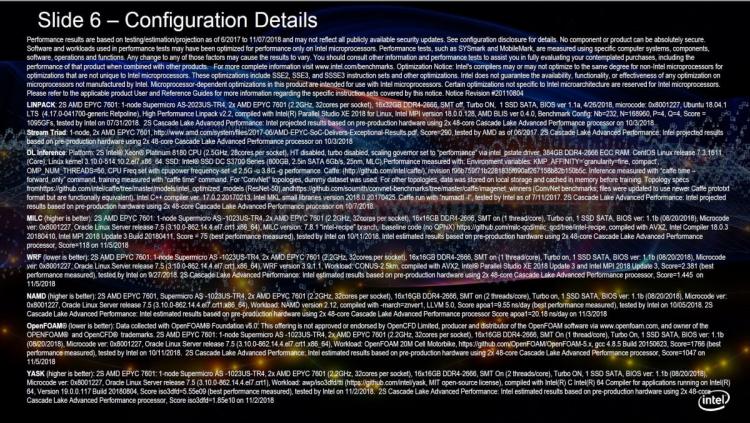 Meanwhile, 17x Deep Learning inferencing performance uplift compares a 2-socket, 28-cores per socket Xeon Platinum 8180 system with 2x48-core Cascade Lake. Once again it's based on pre-product hardware, and again simultaneous multithreading (i.e. Hyperthreading) is disabled. Once again, a huge generational leap in a task rising in relevancy in the real world.

It's a similar story for the remainder of the results, with Intel's latest and greatest Xeon solution comfortably outpacing AMD's current top end on raw performance with SMT disabled.

Data is certainly welcome, and the numbers nonetheless look great with AMD's EPYC 'Rome' 7nm platform still a way out from release. It is however notable that Intel doesn't mention perf/watt or power draw, and steers well clear of TCO calculations. That said, it's possible that neither metric is relevant in circumstances where Cascade Lake is a serious option, i.e. when performance per socket overrides all other considerations.

Is this important for general consumers? Not really, although the extreme nature of the Cascade Lake solution - using a technique of 'gluing' two dies onto one package which Intel derided when EPYC was first launched - does highlight how concerned Intel might be of AMD competitiveness and core count leadership. The timing of the announcement also hasn't gone unnoticed. With their 10nm process seemingly stuck in development hell, it's going to be fascinating to see how they respond to the 64-core 7nm Zen 2 AMD "Rome" EPYC next year.