SuperSpeed USB: Sharkoon expands their lineup of USB3.0 products and presents their first USB3.0 stick. The Sharkoon Flexi Drive Extreme Duo is based completely on speed and offers read and write speed transfer rates of up to 130 MB/s.

The rapid transfer rates of the Flexi Drive Extreme Duo is in thanks particularly to its flash memory architecture. Sharkoon equipped for the first time a memory stick with a synchronized DDR NAND. The integrated USB3.0 controller manages two SLC-based DDR NAND components with its dual channel mode. Particularly with the extreme increased performance of the write speed produced by the synchronized DDR flash memory: The Sharkoon Flexi Drive Extreme Duo with its 16 GB storage capacity can be completely filled within less than two minutes. Thanks to the SLC memory cells, which allows up to 100,000 writes per cell, the stick is also extremely long lasting. The Flexi Drive Extreme Duo is moderate in reference to its power usage: The USB3.0 controller is designed for 1.2 Volt operating voltage.

End customers will find the Sharkoon Flexi-Drive Extreme Duo available for the suggested retail price of 49.90 euros in authorized retailers.

For more information on Sharkoon go to their website
www.sharkoon.com 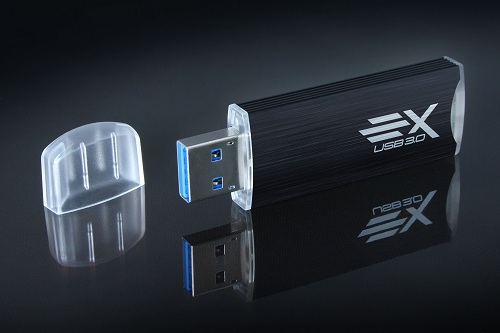