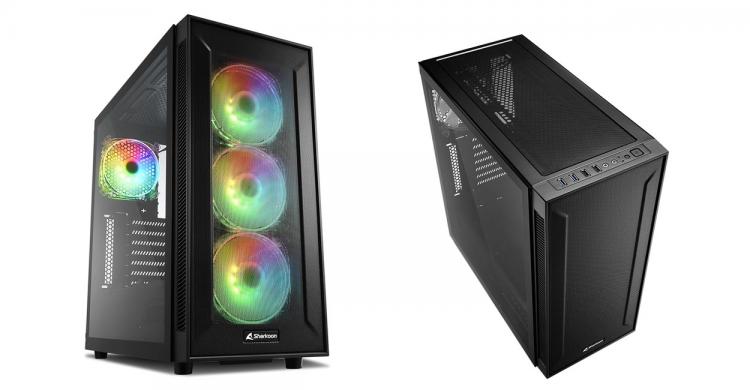 Strong Airflow
Thanks to the front panel with the mesh grille, the Sharkoon TG6M RGB aims to ensure a continuously optimal temperature, even when the system is in full operation. Behind the front panel, three 120mm ARGB fans with rubberized contact points are pre-installed, with no visible screws, and in a modular framework. A fourth fan of the same type ensures that the heated air is removed through the back of the case. The case comes with dust filters on the front and bottom panels.

Optional Water Cooling
Like the previous TG6 model, the Sharkoon TG6M RGB has a completely detachable fan tray. If desired, this facilitates the installation of a radiator behind the front panel. A radiator with a length of up to 360 millimetres and an installation height of 5.2 centimetres will find room here.

Designed for Eye-Catching Light Effects
The pre-installed 120mm ARGB fans provide a vivid illumination of the built-in hardware. The case comes with a pre-installed RGB controller which supports up to eight LED elements. Colours and effects can then be freely customized using the software of compatible motherboard RGB sync via the 5V-D-Coded-G or 5V-D-G pinout.

Tidy Space for Components
The Sharkoon TG6M RGB offers just as much space for high-performance components as its predecessor: There is enough room for graphics cards with a length of up to 40cm and CPU coolers with a height of up to 16.7cm. Power supplies with a maximum length of up to 20.5 cm can also be accommodated. Up to three 3.5-inch or four 2.5-inch data storage drives can be installed in the case: in a moveable HDD/SSD cage, or behind the mainboard tray or on the power supply tunnel. There are also several cable pass-throughs in the mainboard tray to keep the cabling tidy.

Pricing and Availability
The Sharkoon TG6M RGB chassis is now available at partner resellers including Alternate.de for 87.90