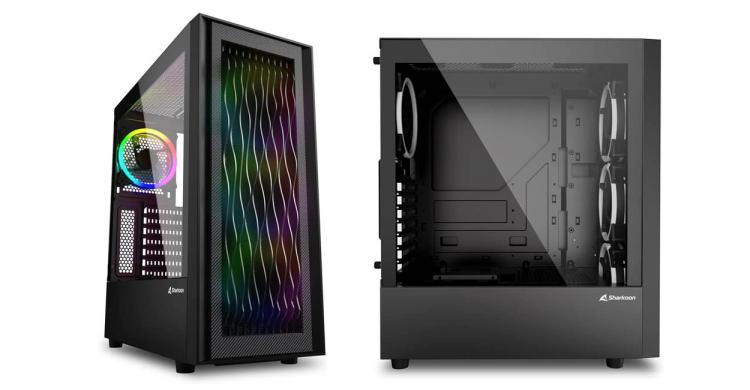 Sharkoon introduces its latest gaming case  the Sharkoon RGB Wave. The chassis features an eye-catching 3D wave front panel design that elevates RGB illumination coming from the three pre-installed 120mm ARGB fans behind it. Aside from the 3D wave front panel design, the front panel has a large mesh vent for intake delivering superb cooling out of the box. The Sharkoon RGB Wave also comes with a total of four pre-installed 120mm ARGB fans.

Press Release
Sharkoon is expanding its range of cases with the launch of the RGB Wave. This midi-ATX case gives current hardware components a framework that is both efficient and extraordinary thanks to four pre-installed fans and an air-permeable front panel with a 3D wave design.

An Eye-Catcher
At the heart of the design concept of the RGB Wave is the front panel. This has a series of undulating wave-like strips in front of an air-permeable mesh and set within a carbon-fiber textured frame. It is complemented by a side panel made of tempered glass, through which the built-in hardware can be admired. To visually round things off, three 120-millimeter fans with addressable RGB illumination are installed behind the front panel to accentuate the wave design and the installed hardware with up to 16.3 million colors.

Efficient Cooling for Today's Hardware
In addition to the cases visual aspects, a good airflow for cooling current hardware systems is provided by the air-permeable front panel in conjunction with the three RGB fans that are pre-installed behind it, as well as another 120-millimeter RGB fan on the rear panel. If necessary, the cooling performance can be supplemented by two additional fans with a diameter of up to 140 millimeters under the top panel and also a 120-millimeter fan on the top of the power supply tunnel.

Up-to-Date Ports
For the top ports near the front of the case, Sharkoon provides two standard USB 3.0 ports as well as the usual audio connections. In addition, the RGB Wave has a Type-C port with the USB 3.2 Gen 2 specification, allowing the connection of modern mobile devices for fast and varied data transfer.

Broad Compatibility for Hardware
Thanks to a tidily configured interior, graphics cards measuring up to 33.5 centimeters can be installed inside this compact midi-ATX case, as well as CPU coolers up to 15.7 centimeters and power supply units up to 17.5 centimeters. In addition, the case has space for a total of five SSDs; and two 3.5-inch HDDs can be accommodated in the HDD/SSD cage if no SSDs are already installed inside this.

Pricing
The Sharkoon RGB Wave is listed on Amazon UK for £66.57.