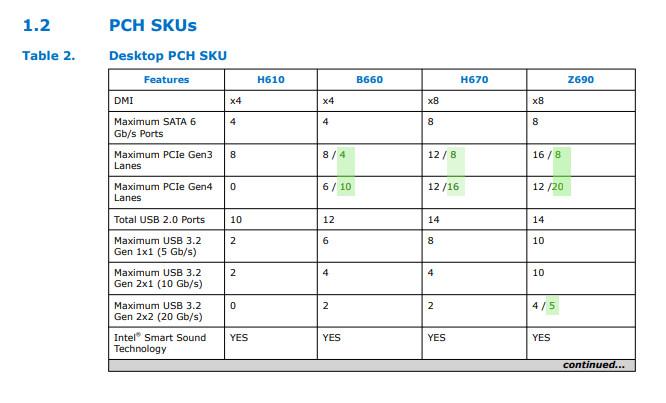 Intel's 12th Generation Alder Lake processor platform hit the market running last year, bringing with it new technologies and higher performance in all market segments courtesy of a new core architecture and motherboard series. It's successor - codenamed Raptor Lake - isn't scheduled to arrive until later this year, but it appears that Chipzilla have inadvertently revealed a few of its platform features earlier than intended.

Keen-eyed enthusiast @unikoshardware spotted alternative features for the 600-series chipset Platform Controller Hubs embedded within the official datasheet (located here), speculating that it was an alternative PCH implementation. Others however have come out to 'confirm' that these relate to the PCH of the 700-series counterparts, giving us some idea of the motherboards' capabilities.

The primary update on the platform will be in increasing its off-chipset PCIe 4.0 capabilities, at the expense of fewer slow PCIe 3.0 lanes. B760 and B770 would each receive up to 4 more lanes, expanding high-speed NVMe storage and peripheral connectivity options in particular. Z790 would receive eight more PCIe 4.0 lanes off the chipset, pushing the total up to 20.

In a further update Z790 will also gain an additional USB 3.2 Gen2x2 port, so the platform could support up to five without additional 3rd party chips. B760 and H770 would retain their current maximum of 2.

Taken in aggregate, Intel appear to be broadening the expansion capabilities of their mainstream desktop platform, but there's not much revolutionary here. It is however a strong signpost for the minimum that AMD should be providing with their own next-generation chipset given their historically slightly weaker offerings.

As usual with rumours, particularly those far out from release, take the information with a pinch of salt.