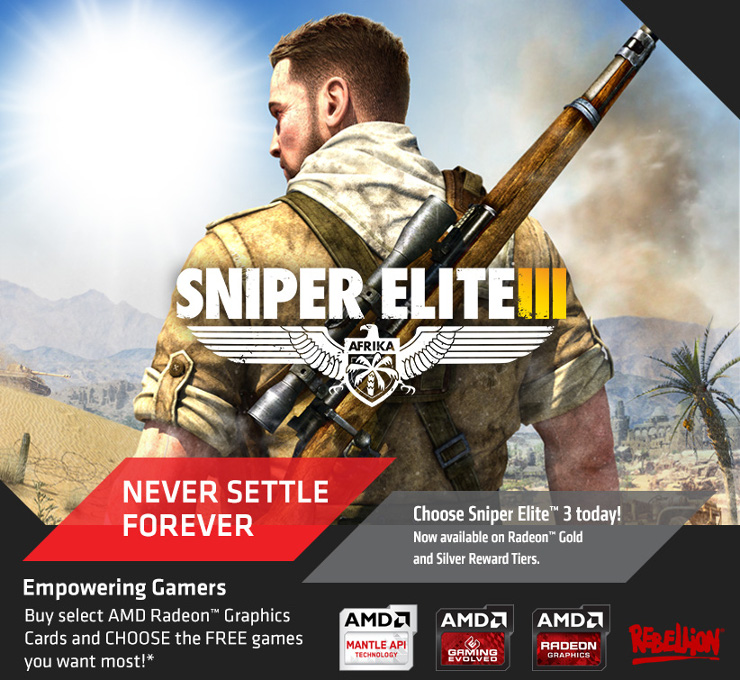 Following the successful Sniper Elite V2 Steam offer earlier this week Rebellion Games have teamed up with AMD to feature their next instalment as part of the Never Settle Reloaded offer.

Sniper Elite III is the third title in Rebellion's franchise of the same name, and is due for release in the EU on the 27th June and 1st July in North America. The setting for this installment is WWII North Africa, yet stealth and sniper-based gameplay (with the same gratuitous kill-cams) will remain the focus.

The title has been selected for AMD's Never Settle Gold and Silver Tiers, joining the likes of Tomb Raider, Sleeping Dogs, Thief and the recently released Murdered: Soul Suspect. Those who have bought an AMD R7 260-class GPU or upwards since April 21st from qualifying retailers should have had up to three free game redemptions unlocked, which they can redeem for any game from the appropriate tier until August 31st 2014. This includes games added after their GPU purchase, an innovation unique to AMD's bundle.

For more information on the offer, including redemption details, visit the Never Settle microsite