Earlier this week the technology press was abuzz over a demonstration Intel organised during their Computex 2018 keynote. The stage was set for the unveiling of something revolutionary, and seemingly they got it: a brand new 28-core HEDT CPU, running at an astounding 5GHz! Not only that, it was due to be released this year. "Oh My God," "RIP Threadripper," - the headlines effectively write themselves.

It was speculated that this monstrous CPU was a high end workstation derived from an upcoming CPU architecture, perhaps even manufactured using Intel's new 10nm process. This might have given it the efficiency required to maintain 5GHz on 28 cores within a sensible TDP. However it turns out Intel performed something of a bamboozle, in multiple directions. 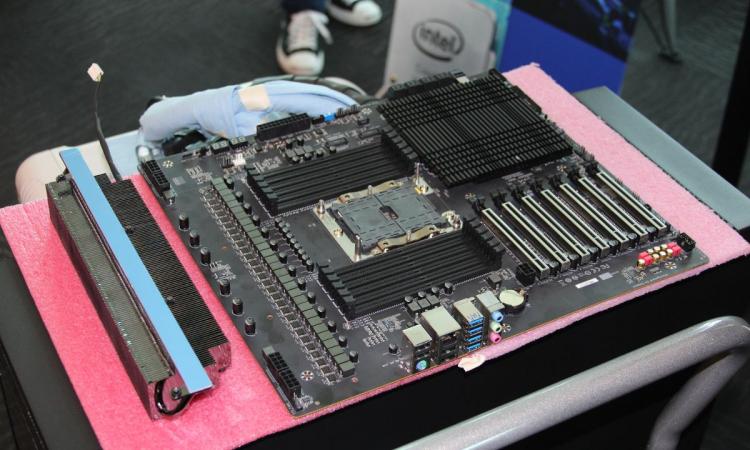 The motherboard used in the demonstration. Note the elaborate VRM cooling, needed for the 32-phase power design.

The first, and perhaps most obvious, is that the CPU wasn't a next generation design. In fact it was an unlocked variant of their existing Skylake-X for Enterprise CPUs, likely the 28-core Xeon Platinum 8176 or 8180. These utilise the large LGA 3647 socket seen on some of the motherboard images released since the keynote.

Next, that 5GHz core frequency. Press were given to believe that 5GHz was under stock settings, but in fact the CPU was overclocked. Heavily. The Xeon Platinum 8176's have a base frequency of 2.1GHz and all-core turbo of 2.8GHz; even binned variants of this chip are unlikely to come in under the Xeon Platinum's max TDP of 205W at 4GHz, never mind what was reported.

So, it's an existing Xeon chip brought down to a consumer desktop (albeit HEDT) platform and overclocked well past typical. That said, the performance demonstrated was excellent, blowing all before it out the water on a selection of synthetic multi-core benchmarks. And at least that overclock was performed with standard consumer-level cooling, right? Well... not so much. 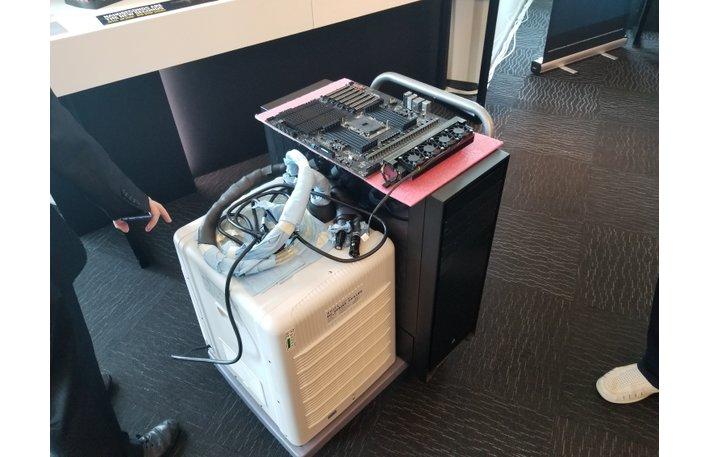 Photos taken after the keynote revealed the cooling solution to be a chiller, bringing the temperature to well below ambient (believed to be approx -10C). Such a solution is loud, runs to hundreds of dollars, and is well beyond the scope of consumer PCs.

So at best the demonstration was disingenuous, but the cherry on the top was AMD stealing Intel's thunder on Wednesday by revealing that Threadripper 2 will feature up to 32-core models, without a significant change to the motherboard platform. Oof, tough week for Chipzilla.

Nonetheless, the demo does indicate that Intel are planning to bring newer, bigger CPUs to the HEDT platform which will offer better multi-core performance than the existing Skylake-X CPUs available to consumers. It should be said that these chips are unlikely to arrive on existing LGA2066 motherboards, and may instead trigger either a move to LGA 3647 across their HEDT range, or a new product segment above Core-X. If nothing else Threadripper has proved that consumers aren't put off by larger-sized CPU packages, so long as the mounting system is robust.

As for the cost of these CPUs, that discussion is best had closer to their release. It's notable that the CPUs from which this 28-core model is derived comes in at $10,000 each; even without key feature support such as dual-socket configurations and ECC memory, you'll probably be paying a healthy premium over even AMD's 32-Core Threadripper 2.