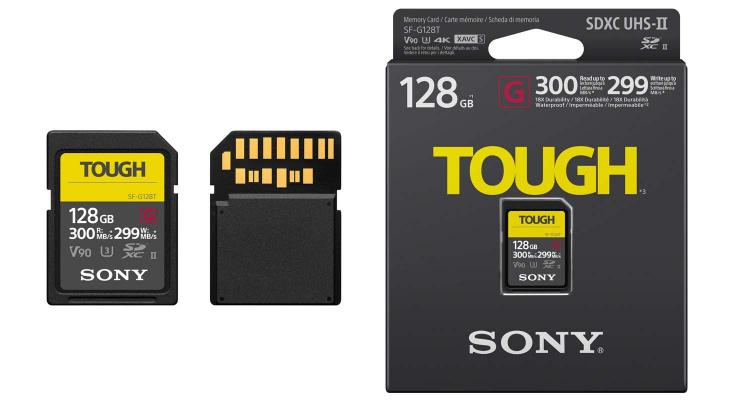 
Redesigned To Be Extremely Tough

The Sony SF-G series TOUGH memory cards are redesigned to be protected against typical physical damage that is common with conventional SD cards. It features a rib-less design with no write-protect switch so you wont have to deal with a broken data protection lock or broken connector ribs. It also features a completely sealed with one-piece moulding structure that enables it to achieve the highest grade of waterproof (IP8X) and dustproof (IP6X) properties.

Built To Unleash The Power of the Camera

The Sony SF-G series TOUGH memory card is created to unleash the full potential of high-end cameras such as the Sony &#945;9 and &#945;7 Series full-frame mirrorless cameras. With write speeds of up to 299MB/s, buffer clearing time can be minimized allowing photographers to shoot many frames per second and capture as much as they want. The Sony SF-G series TOUGH supports V90 specifications, the highest standard of video speed class.

Sony SF-G series TOUGH memory card series includes the SD Scan Utility that monitors the status and condition of the SD card. The utility also features the File Rescue Software which can recover data and photos that are accidentally deleted. Furthermore, the SD card comes with a suite of protection including X-ray proof, anti-static properties, magnet proof, temperature proof and feature UV Guard.