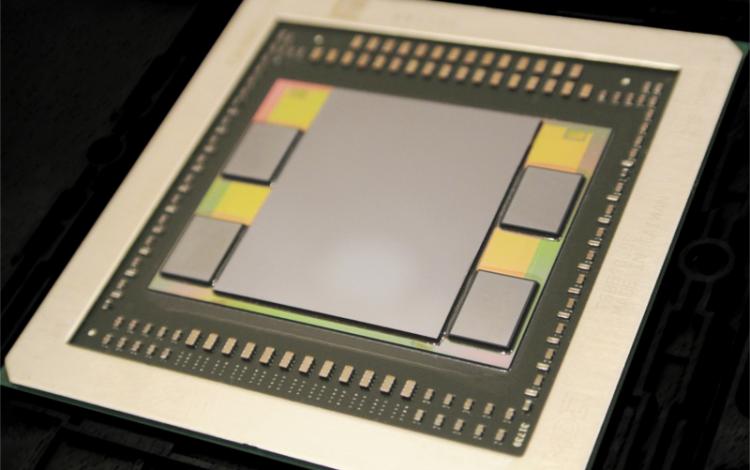 The release of AMD's Radeon R9 Fury - the little brother to the brutish flagship R9 Fury X - is just around the corner and Tweaktown have the scoop on the specifications of the Fiji PRO GPU at its heart.

Based on the same architecture and chip package design as the Fiji XT within each Fury X GPU, the air-cooled Fury's Fiji PRO GPU looks set to come equipped with 56 rather than 64 Compute Units; in more common parlance it will feature 3584 shaders, 12.5% fewer than the 4096 on the Fiji XT. Although the number of Texture Units will also be commensurately lower (224 rather than 256) ROPs and tessellation hardware should be unchanged. The engine clock will be identical at 1050MHz, indicating that there's perhaps not much room to play for at the top end, as will be the memory at 500MHz.

AMD Fiji XT block diagram. The Fiji PRO will have 8 fewer CUs

Depending on driver efficiencies 12.5% fewer shaders places the Fury squarely between the R9 390X and Fury X in terms of expected performance. Real-world performance could be different again, with the mature 390X perhaps edging out the Fury in many cases where the newer card is not able to take advantage of its immense memory bandwidth. Either way, it should be an interesting comparison to see.

Although the overall size of the Fiji package remains unchanged (just 55mm x 55mm) it remains to be seen if the R9 Fury will be able to leverage this tiny footprint into a card to match the diminutive size of the R9 Fury X. Partners will be free to create their own cooling solution, but relying on traditional methods may necessitate more length to accommodate heatsink and fin surface area. Don't be surprised if this is one of a few key differentiators for the top brands. Tweaktown report that AMD have a target temperature of 75C on the Fury, fully 25C more than the Fury X, reflecting the capabilities of the flagship's liquid cooler.

Reference and partner implementations of the Radeon R9 Fury are due in the coming weeks, pegged at $549 if the E3 pricing statement holds true.