More information has emerged this week that sheds light on Intel's upcoming refresh of their mainstream desktop platform. Asian site Coolaler have published details of three new 9000-series CPUs which will head the range and probably tempt more than a few enthusiast overclockers to part with their cash. Among them is the 8-core, 16-thread Core i9-9900K, Intel's first 8-core CPU on the mainstream rather than HEDT platform.

Replacing the Core i5-8600K will be the Core i5-9600K. With six cores and six independent threads supported, the underlying chip will be very similar to the part it replaces. However as you might expect the operating frequencies see an improvement: at 3.7GHz the base clock is improved by 100MHz, while the Max Turbo frequency is up to 4.6GHz from 4.3. TDP envelope remains unchanged at 95W, as does the quantity of L3 cache. 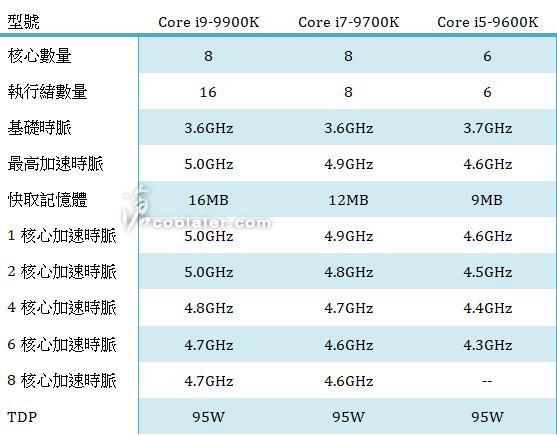 Moving up a step, the Core i7-9700K will supplant the current mainstream flagship, Intel's Core i7-8700K. Unlike the i7-8700K however it will support neither hyperthreading nor just six cores. Instead, this SKU will be an eight-core part that's clocked in excess of the 8700K, potentially making it an excellent choice for enthusiast gamers. With 12MB Cache, the CPU has also had the traditional 0.5MB cache per core syphoned off due to lack of Hyperthreading support. At a base clock of 3.6GHz and Max Turbo of 4.9 GHz Intel clearly aren't messing around here.

Finally, all eyes will probably be on the Core i9-9900K when the series launches in the near future. A massive chip for the mainstream, this CPU supports eight cores with hyperthreading. Clearly it's a belated counterpunch to AMD's 8-core Ryzen platform, but the meatier cores of Intel's Coffee Lake architecture should mean chart-topping performance that ventures into the realm of the HEDT. Of course, extra performance is never free; expect pricing to be in line with this premium expectation of performance.

Quite apart from the number of cores and threads supported, the maximum CPU frequency is also eye-opening. Intel are apparently planning a Max Turbo of 5GHz on this consumer part, while 4-8 core turbo modes are also aggressive. Staying within a 95W TDP envelope is probably the real trick however, potentially indicating another process optimisation on the 14nm node.

One other unearthed rumour which makes a lot of sense is that the Core i9-9900K will have a soldered heatspreader rather than utilising paste Thermal Interface Material (as has typically been the case since Ivybridge). Such a move would aid in keeping temperatures under control, and be particularly valuable in maintaining high clock speeds when many cores are under load. As with all rumours however, treat them with scepticism until official information is published.

These CPUs, based on Coffee Lake rather than next-generation architecture, are probably scheduled to launch at the same time as the Z390 motherboard platform this summer. Intel will likely hold station on the x600K and x700K pricing bands due to Ryzen's competitiveness, but the cost of the flagship i9-9900K is anyone's guess. Not cheap would be our assumption.