SPEEDLINK® presents groundbreaking console accessories to mark Gamescom 2011. The latest generation of console games are best played using controllers with precise and fast analogue sticks that are within striking distance. The Xbox 360® gamepad from Microsoft® represents the pinnacle of ergonomic analogue stick placement  and now thanks to SPEEDLINK®, PS3® gamers can also enjoy what it feels like to have an optimally positioned analogue stick. The XEOX Wireless Gamepad for the PS3® transports the Xbox® gamepad layout to the PlayStation® world for the first time ever. Its robust 2.4GHz wireless technology also gives you maximum freedom from the console, while the turbo function for controlled rapid-firing offers you a tactical advantage.

Retaining its classic layout, the STRIKE FX-6 controller for the PS3® and PC combines the legendary precision of the STRIKE series with Bluetooth® technology for up to ten metres of wireless freedom all without requiring an additional receiver. Its ergonomic shape with ultra-grippy, precisely controllable triggers, low weight, and pressure-sensitive buttons together with turbo function deliver maximum gaming comfort and total control, while the vibration feedback function makes it feel as if youre actually in the game. The integrated Li-Polymer battery offers up to 12 hours of gaming enjoyment and can be charged really easily either via the console using a USB cable or, for the ultimate in convenience, using a SPEEDLINK® charging station like the QUADDOCK All-in-1 Charging System.

The QUADDOCK Charging System isnt just suitable for gamepads  its also perfect for Move system motion and navigation controllers. It doesnt matter which of your PS3® controllers needs charging, the system does it quickly and reliably. It has two ports for gamepads and two for PlayStation® Move controllers  plus thanks to its flexible charging ports you can charge a second motion controller instead of the navigation controller, or vice-versa. At the same time, it operates from any 230V outlet thanks to the accompanying AC adapter  freeing you from the console. 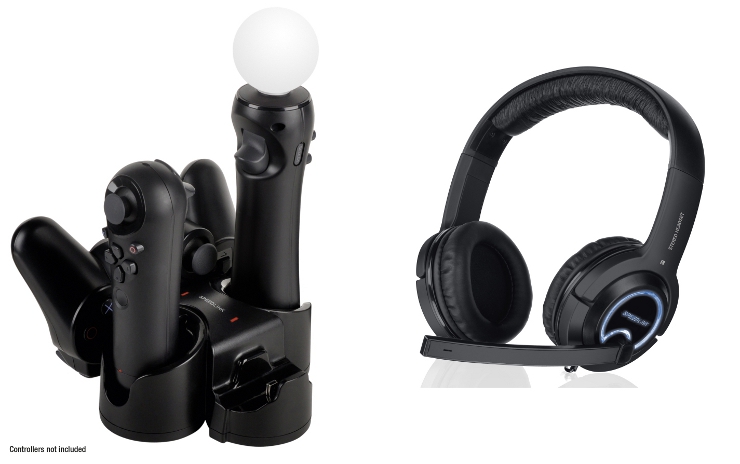 It doesnt matter what your preferred platform is, the XANTHOS Stereo Console Gaming Headset lets you immerse yourself in game worlds, delivering sensational stereo gaming sound quality whether on the PS3®, Xbox 360® or PC. The microphone delivers the best sound reproduction quality for chatting to your teammates  plus the inline remote allows you to mute the mic and even adjust the sound playback level. In addition, the three-metre cable offers ultimate freedom, while the padded earcups provide maximum comfort  so you can concentrate on the most important thing: the game.

For more information on Speedlink's range of accessories and peripherals visit Speedlink.com