Over the course of several years game ownership and play time aggregating site Steam Spy has proved to be an invaluable resource for industry professionals and consumers. Developed by Sergey Galyonkin, Steam Spy effectively 'surveys' a random distribution of Steam Accounts to garner information on unit sales to a good degree of accuracy (+- 0.01%, 98% confidence). This info, offered on a per-game basis, is the sort of data that's usually a closely guarded secret of publishers who have no interest in making such metrics available to competitors and the public at large. And unfortunately it may be unavailable for the foreseeable future.

Yesterday evening an update to Steam's Profile Privacy Policy was pushed which ostensibly offered users more control over the information they choose to make public. Users can continue to make their whole profile public, private or accessible to Friends only, and also restrict visibility for both 'Game details' and their 'Inventory' of tradable in-game items. Great, in principle.

A key factor in the change (not mentioned in Valve's blog post) is that Game Details, i.e. which titles you own and how much you've played them, is now by default set to 'Friends Only' for all accounts. This prevents Steam Spy's surveying tool from viewing the information, making harvesting accurate data nigh-on impossible. Unfortunately making such a system opt-in and harvesting only from those accounts changes the sample population, reducing the data's applicability to the Steam population as a whole. 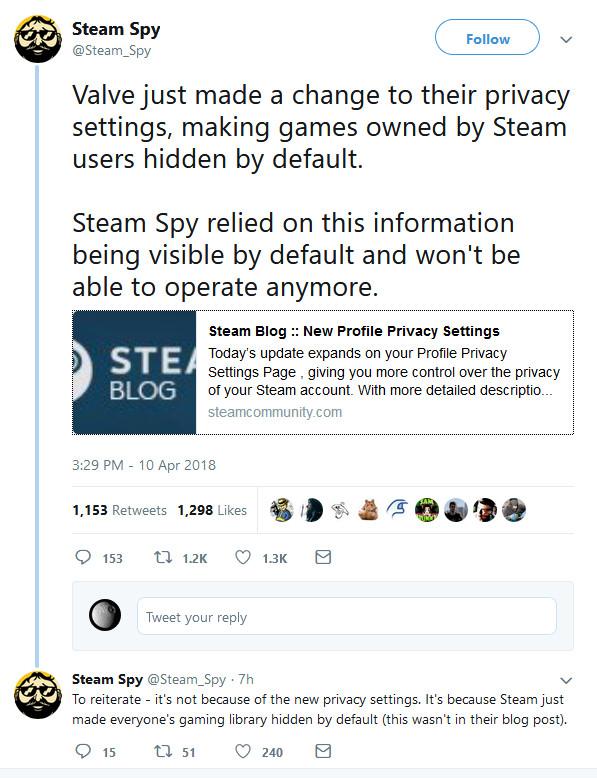 There may also be an impact on SteamDB, a complementary third-party tool which tracks concurrent player numbers and other useful metrics, in-part making use of both Steam Spy's data and information made available by public Steam Profiles.

In the recent past game developers and Valve themselves have lauded Steam Spy as an invaluable tool, especially for indie devs without access to demographics available to major publishers. It also gave Youtube and Twitch influencers evidence of their impact on a games' sales, allowing them to promote their worth to potential partners. And it goes almost without saying that journalists and critics readily dipped into it to assess new trends or declare games 'failures'. Losing all that at a stroke is disappointing to say the least.

Champions of online privacy however may view it as a important step in giving users more control over who does and doesn't see their personal information. It is perhaps no coincidence that social networks are currently in the firing line for oversharing data in a way that's opaque to users of their platforms. However in this instance the outcry in the opposite direction has been sharp, perhaps because of the clear value to the industry that Steam Spy provides, or perhaps because your general Profile information remains public by default.