The leading manufacturer of gaming peripherals and accessories, kicked off the with the announcement of the companys first wireless headset for Xbox 360®. The SteelSeries Spectrum 7xb combines advanced wireless technology with SteelSeries ExactSND and LiveMix features, interchangeable earcups, and innovative audio options with SteelSeries award-winning, signature features like the retractable, unidirectional mic, four-piece breakdown and 50mm drivers.

We believe that the SteelSeries Spectrum 7xb will offer Xbox 360 gamers the right combination of what they should expect and want in a wireless headset, said Bruce Hawver, SteelSeries CEO. Gamers and industry reviewers gave our Spectrum wired headsets an incredibly positive reception. We knew immediately after launch that we needed to offer a wireless design to round out the line-up. Now weve brought together the award-winning design of the 7H headsets with its interchangeable earcup design and powerful soundscape, and have merged it with the advanced wireless technology, found along with our unique LiveMix feature and the new ExactSND which offers pre-set .EQ settings for different usage scenarios. Were confident that the Spectrum 7xb will not only deliver, but impress."

Welcome to Wireless
While the Spectrum 7xb is SteelSeries first wireless headset, the company is not new to the wireless audio space. The headset and technology has been researched and developed by a dedicated team at SteelSeries who have more than 30 years of wireless audio experience. This level of understanding has generated a wireless experience that will minimize interference and provide improved quality and response due to the antenna design, which will ultimately result in superior product performance. The SteelSeries Spectrum 7xbs wireless transmitter, no larger than a deck of playing cards, powers the wireless functionality of the headset. The transmitter connects directly into the Xbox 360 console and is equipped with connections for USB, 3.5mm and RCA jacks allowing the user to choose their preferred connection.

The headset operates with wireless 4Mbit/s bandwidth for true lossless digital audio and was designed to avoid interference from other devices, using intelligent frequency hopping up to 344 times/second to offer crystal clear audio. The Spectrum 7xb headset will operate up to 32 feet away from the Xbox 360 transmitter and features a smart LED to notify when the headset is connected. The headset was designed for low power consumption, which includes an automatic shut down feature after transmitter is shut off or prolonged inactivity and will supply users with 20+ hours of non-stop gaming powered by two AAA batteries.

Complete Control
Regardless of the environment, SteelSeries designed the Spectrum 7xb so that the gamer would be in complete control of how the headset feels, delivers and reproduces their audio and voice communication. Gamers can choose:

Leather or Cloth: Featuring 50mm drivers in the ear-cups, the closed-type headset offers superior passive noise reduction, and comes equipped with two interchangeable ear-cushions that offer the option of leather-type material with noise dampening foam or hear-through cloth covered foam.
LiveMix: Found on the left earcup, the quick-button LiveMix option is there to improve the balance and mixing of Xbox LIVE chat and in-game audio, so that voice communication is mixed perfectly and is clearer than ever before over the sounds of gunfire and explosions, without having to increase the volume of the headset and risk hearing damage.
ExactSND: Pre-set sound settings which can be activated by a button on the right earcup, allowing the user to quickly switch between .EQ settings. The options of ExactSND includes performance for directional sounds like footsteps and gunfire, immersion for optimized environmental sound and game music, and entertainment for increased bass levels and sound when watching movies.

Superior Sound
SteelSeries believes that a headset should always deliver superior sound quality both through the reproduction of in-game audio and voice communication. The Spectrum 7xb features an advanced soundscape that provides gamers with the ability to pinpoint directional sounds of footsteps and grenade drops without being drowned out by deep bass sounds from explosions.

A wireless headset also means that features and controls will be found directly on the headset. Gamers will find an independent game audio control on the right earcup above the retractable microphone. For gamers who travel to tournaments or even just to a friends house, the Spectrum 7xb can also be easily broken down into four separate pieces removing the worry of showing up with a crushed headset. 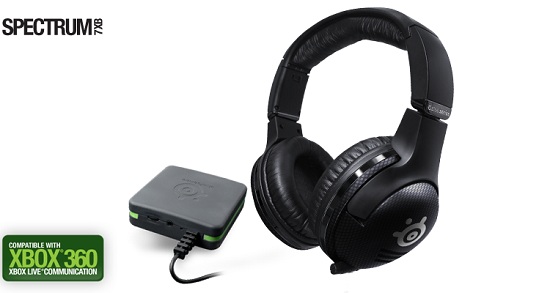