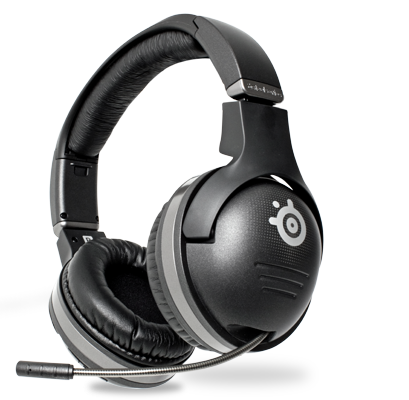 Wireless Features
 The headset will operate up to 32 feet away from its transmitter and features a smart LED to notify its user when the headset is connected.
 Designed for low power consumption, the headset includes an automatic shut down feature after the transmitter is shut off or prolonged inactivity. The 20+ hours of non-stop gaming is powered by two, included AAA batteries; the option to use rechargeable batteries is left up to the user.
 The SteelSeries Spectrum 7xbs wireless transmitter connects directly into the Xbox 360 console and is equipped with USB (for power), 3.5mm and RCA connections. Hook up the 7xb to your Xbox 360 for full headset functionality (audio and voice) or to any device with a USB, 3.5mm and/or RCA jack to use as a wireless headphone (audio only) to simply listen to your choice of entertainment.

Exclusive Sound Options
Regardless of the environment, SteelSeries designed the Spectrum 7xb so that the user would be in complete control of how the headset feels, delivers and reproduces their audio and voice communication. Users can choose:
 LiveMix: Found on the left earcup, the quick-button option improves the balance and mixing of Xbox LIVE chat with in-game audio so that voice communication will be mixed perfectly over the sounds of gunfire and explosions, without having to increase the volume of the headset and risk hearing damage.
 ExactSND: Pre-set sound settings activated by a button on the left earcup, allowing the user to quickly switch between .EQ settings. The options of ExactSND includes performance for directional sounds like footsteps and gunfire, immersion for optimized environmental sound and game music, and entertainment for increased bass levels and sound when watching TV/movies.