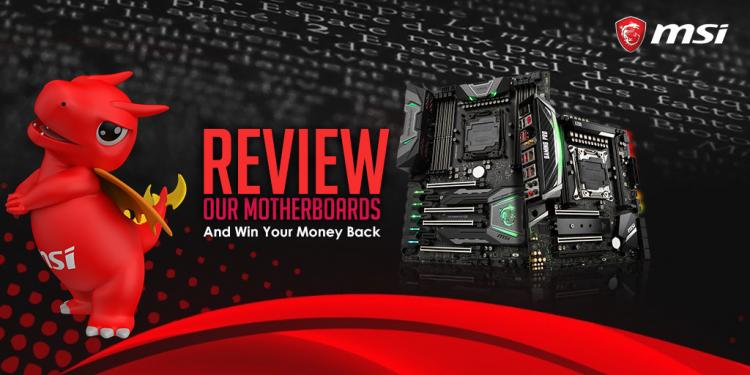 MSI motherboards have been some of the best released in the rather hectic past year, and are well known for the value they present to gamers no matter the price point. Now, as something of a thank-you to their loyal customers, MSI UK have started a the Shout-Out For MSI promotional campaign to preach the gospel of 'MSI Motherboards are Awesome!' closer to the grass roots level.

The idea is simple: review your Z370 or X299 motherboard on the product page of qualifying UK etailers, and you could be one of 10 lucky owners to receive their money back on the motherboard. Those funds can then be used on a new SSD, or perhaps a MSI GPU... heck, you could even buy another motherboard!

Ten Z370 reviews and five X299 reviews will be picked and announced on the 15th January, February and March, so if you want to qualify for the first round you'd best be putting your skates on. MSI have also made it known that it doesn't matter when you made your purchase, so those made in 2017 are also eligible.

Be honest, open with your praise but also any criticism you might have. Bear in mind that even if you don't win, you're informing future potential owners other the benefits of the products, such as they are. And be aware that to claim your winnings (should you be chosen) you'll need to be able to supply MSI UK with the invoice for said motherboard.

Full rules, terms and conditions are available at https://uk.msi.com/Promotion/shout-out-for-msi, where you can also enter the competition. The qualifying retailers are Amazon.co.uk, CCLOnline.com, Overclockers.co.uk, Scan.co.uk and Novatech.co.uk.