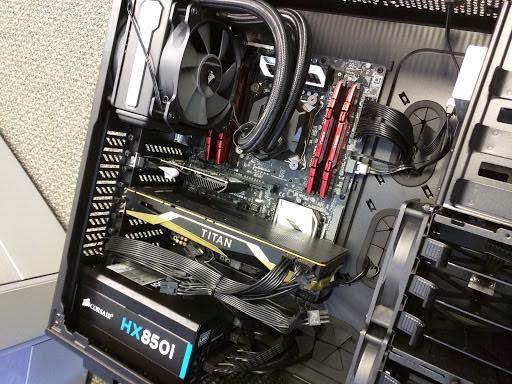 The enthusiast community loves its rumours and today is no execption. Via Facebook, Reddit and a host of other sites comes a new card image which has got everyone in the mood to speculate - could this be an early sample of NVIDIA's Volta GPU?

The image itself is a curious one, but lets begin with its provenance. Originally posted on Facebook and picked up by Overclock.net, it's allegedly the responsibility of an NVIDIA Intern who went though the somewhat unwise step of also posting his NV ID. All well and good, and normally something which would be overlooked in favour of the latest adorable cat .gif, so why is everyone excited.

One word: Volta. Uttered by the leaker himself.

Volta is NVIDIA's follow-up GPU architecture to Pascal, and was formally announced earlier this month at GTC 2017. Enterprise-class cards with the V100 GPU are expected in Q3 as part of the DGX-1 Volta, a product specifically designed for Deep Learning, so the existence of PCI-Express add-in cards engineering sample aren't beyond the realms of possibility. There are a couple of issues with that premise though.

TITAN generally has little to do with NVIDIA's enterprise business, whose cards are usually branded 'Tesla'. TITAN (or GTX TITAN, GeForce was dropped some time ago) are a series of cards for the prosumer market, straddling the divide but still a separate group.

And then there are the notches in the PCB. This card does not support SLI connectors for card-to-card communication, instead relying on what appears to be NVIDIA's high bandwidth NVLINK technology. This technology has thus far been exclusive to Tesla and Quadro cards, with Pascal-based TITAN GPUs favouring SLI. Could this mean that NVLINK is coming to next-generation TITAN's? Maybe.

NVLINK Edge Connectors as seen on the Quadro GP100

However there is another possibility. Notice the smaller card just above the TITAN - this appears to be a low profile (and low power) GPU. A reason why this might be necessary is if the 'TITAN' card didn't have any video outputs (i.e. is designed for compute mode operation only), and would allow the system to demo its high-performance as a stand-alone unit. And of course NVIDIA Tesla GPUs typically don't have video outs.

This all paints a very confusing picture, but the most obvious conclusion is that it's a Tesla card which for some reason has a TITAN cooler shroud attached. It's also unlikely to be a NVLINK-equipped Tesla model already released as these have had PCI power connectors in a different location (as well as probably having Tesla boldly written on the shroud). And of course it could be a very elaborate fake.

But it could be a Volta TITAN.

There are currently 755 user(s) online:
Google