Synology UK Lay Out Their Plans For 2020 In NAS

Synology, the Taiwanese storage experts founded in 2000, specialise in the development and manufacture of a specific niche of products: Network Addressed Storage hardware and software. Their range is comprehensive, with dozens of models tailored to users with modest home office requirements through to comprehensive enterprise systems satisfying complex administrative and regulatory requirements. Yearly, they hold regional events to showcase developments that are rolled out over the subsequent 12 months, particularly developments to their DiskStation Manager on-board software ecosystem and upcoming hardware solutions. Their latest, Synology 2020, took place last month and included a stop in London, which we were more than happy to attend.

Synology are a major player in NAS storage arena, with devices collectively managing over 60 Exabytes (1 EB = 1bn GB) of data worldwide, and 14m users interface with that data in a flexible manner remotely through Synology's QuickConnect / DDNS. Now into their 20th year, they're keen to emphasise their roots as storage software developers who migrated into the hardware space, giving them an outlook which is grounded in the user experience.

In addition to media, Synology also seek out hardware partners and NAS system users both large and small scale for their showcase events, not only to drive business but also solicit valuable first-hand feedback directly. In past years the event had a subtle theme - on-board 1st and 3rd party apps for instance - but the idea is the same: stakeholders matter.

Compared to previous years, Synology 2020 was more generalised and software focussed with relatively few hardware announcements. That's perhaps a reflection of the changing landscape of NAS storage, where Hybrid Cloud solutions are playing a greater role and software is still catching up with the potential afforded by NAND-based storage solutions such as SSDs.

Naturally, the DiskStation Manager suite took centre stage in this environment. New iterations are released frequently following closed and then public beta's, but 2020 will see the introduction of a new full version and all that entails. New roles for the Synology C2 Cloud in NAS local storage were unveiled. The promise of hardware accelerated deep learning analytics was hinted at through a new NAS with on-board NVIDIA GeForce GTX GPU. And the enterprise market was offered a glimpse at some new NAS hardware; while consumer models maintained a more stable platform. 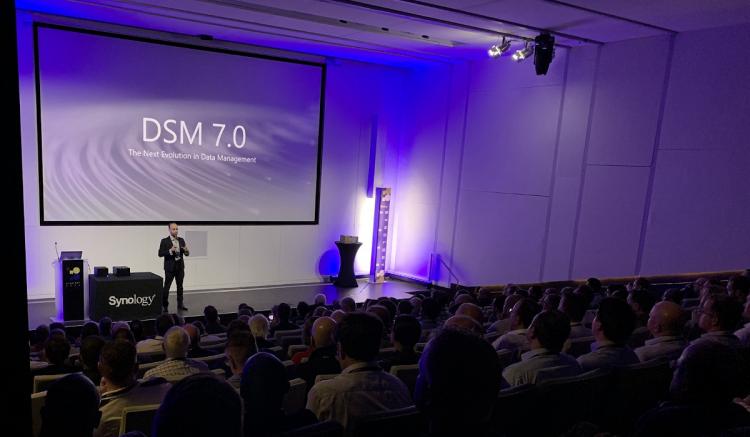 NAS operating systems exist in a sort of awkward middle-ground, following industry UI trends but attempting to be platform agnostic (i.e. operating on Windows Server/Apple etc. via web portals and purpose-built apps). Through six major iterations and a plethora of minor ones, DSM has adapted to innovations in OS's, applications, web apps and most recently smartphone apps; all while expanding functionality beyond simple file storage.

As of DSM 7.0, a NAS will manage File Sharing, Data Backup, Multimedia services, productivity apps, virtualisation and many cloud services, all while offering a consistent experience that scales from the home user to enterprise admin. That is no mean feat, and graduates the software from lowly file manager to full-blown OS, accessible remotely.

DiskStation Manager 7.0 has been in extended closed beta since early 2019, and should launch in the near future; like every major update to Synology's NAS operating systems, it incorporates plenty of important changes to the UI and underlying framework.

First, a development that decidedly consumer-focussed. Synology Moments was introduced half a decade ago, and even then the overlap between it and the Synology Photo Station app were pronounced. Over time the functionality of both has evolved to become ever more enmeshed, to the extent that with DSM the two are merging into Synology Photos. Now users can bring the powerful organisation functionality to bear alongside Moment's image recognition facility in one app that's straightfoward to use.

This software-centric approach, consolidating where necessary to improve usability rather than throwing everything at the user and seeing what stick, is a perfect example of Synology's different take on NAS ecosystem solutions. 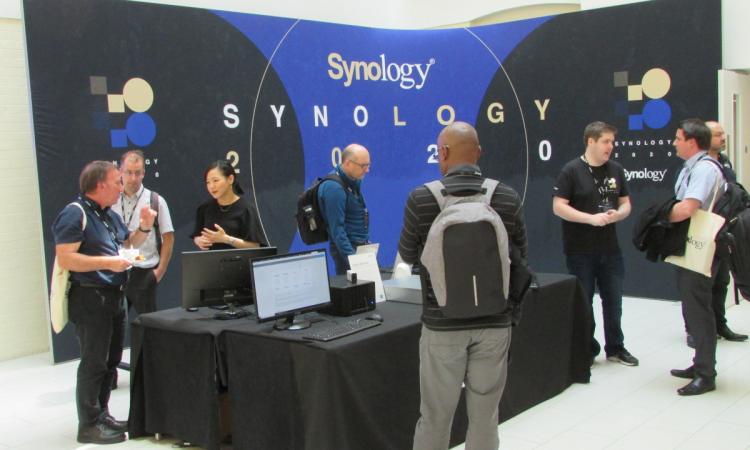 Unsurprisingly, Storage Manager is a core component of DSM as it pertains to NAS file management. An up to date UI, reflective of users needs and realities of how they engage with DSM, is therefore essential. Changes made tend to be subtle but important as they aid productivity and reduce any friction the user or admin might experience.

At a user level, DSM 7.0 migrates some of the UI elements to an intuitive layered view, keeping more pertinent information in view at once and making hierarchical structure more obvious. But more significant changes are implemented for manager and admin categories.

A general weakness of NAS systems has been in the identification of components responsible for degrading performance, particularly arrays of HDDs and SSDs. The new version of DSM generates real-time analytics to determine this level of degradation over time, and is capable of some level of auto self-repair. Critically, storage pools can now be mounted and unmounted while the NAS is online, allowing them for hardware replacement and repopulation with no downtime over the NAS as a whole. Clear prompts also mean that the process is straightforward to implement.

A feature now offered broadly across Synology's NAS range, from High-end Consumer up to Enterprise models, is the ability to utilise an SSD as a caching drive to augment read/write performance. Approximately 20% of Synology's DS918+ - a NAS for small-but-growing businesses - are configured with an SSD cache, indicating its value as an additional feature even in relatively benign environments.

And Synology have one final touch to add to their SSD Caching tools. Like more general storage pools, SSD Caches can now be mounted/unmounted while the NAS is online, reducing downtime and improving the practicalities of utilising drives in this role.

These changes are part and parcel of a tiered approach to NAS storage, accelerating performance for all NAS storage whether local or in the Cloud. Critically, they're designed to be straightfoward enough that even relative journeymen to storage management will be able to engage with the tools productively.

Enterprise-level system managers meanwhile can take advantage of the new Synology Storage Console, a Plugin for VMWare and Windows Server. It allows for the control of aspects of the system without constant switching between VMWare and DSM, including Datastore provision, one-click iSCSI optimisation and Status Monitoring.

The Storage Console plugin utilises a vSphere interface, and will link through to DSM's more powerful suite if device or volume problems are detected. 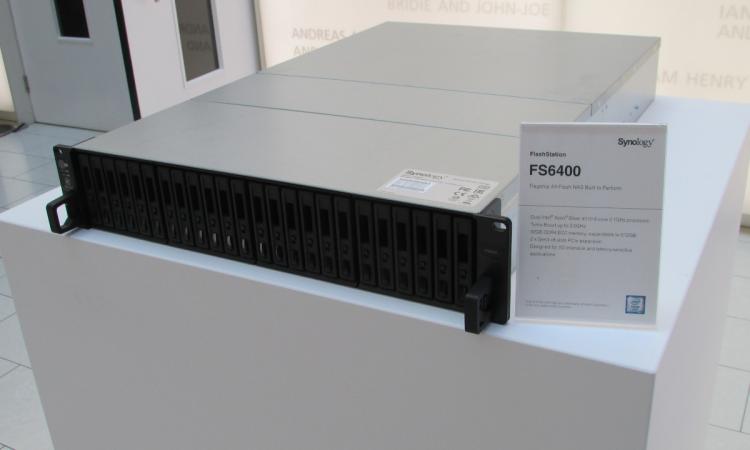 FlashStation is Synology's ever-growing stable of NAS hardware systems leveraging NAND-based SSDs for higher levels of performance than that afforded by HDDs. New additions will be made to this all-flash range in 2020 as drives with a host of 2.5" bays in a variety of form factors.

Furthermore, elements of NAND-accelerated NAS systems will now have finer control over drive overprovisioning, maintaining high IOPS over time in line with the write-durability rates of enterprise SSDs. SSD Caching in particular will benefit from this.

The growth of FlashStation is supported by changes made to Synology Drive, their private cloud solution. While relevant to the full range of users from SOHO consumers up to Enterprise clients, FlashStation-based systems will be benefit from updates made to the database management engine that now allows stable performance with databases over 100m files in size.

One ever-present issue that Synology are seeking to address in 2020 is keeping NAS administrators up-to-date with the myriad of notifications and product updates necessary for keeping a drive array healthy. Through Active Insight, administrators receive alerts on drive degradation, manufacturer advisories, event prompts, and other consolidated information critical and relevant to the NAS. Action recommendation is also part of the toolset, which can be accessed through both a standard wed interface or smartphone app.

Synology are also mindful that information overload is a problem, and so Active Insight cross-checks all 1st and 3rd-party advisories with the hardware actually present in the system, rather than a more generalised approach. This stops the notification feed becoming spammed like a social media account with irrelevant information. 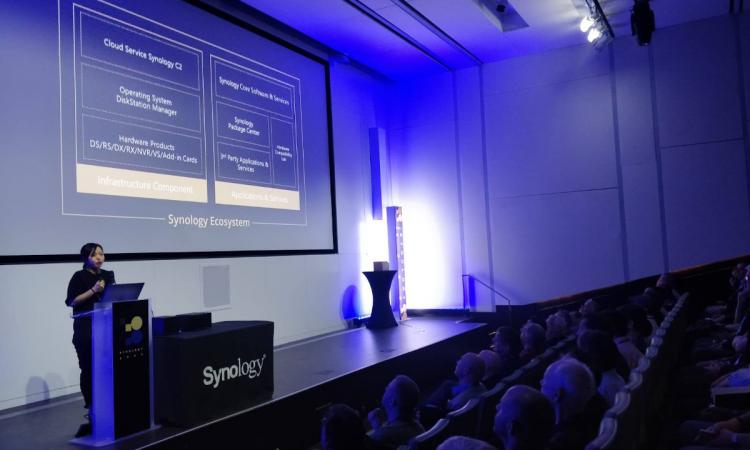 Synology C2 was launched primarily as a cloud backup service at a previous Synology showcase event in 2017 before rolling out worldwide in March 2018. Its data centres located in Frankfurt offered high reliability remote storage compliant with EU regulations, but in a relatively short space of time the C2 service has evolved to be a whole lot more.

The coming year will see further developments in the realm of the Hybrid Cloud leveraging the C2 cloud. This approach is one where a local NAS system operates as a local cache for files managed in the C2 Cloud, reducing bandwidth overheads and creating a more fluid and responsive user experience than a cloud-only approach. Hardware with limited data storage capabilities can offload an excess into the cloud, allowing relatively inexpensive hardware to be used alongside subscription services with limitless storage.

Synology's latest implementation of Hybrid Cloud allows for dynamic allocation of a portion of the NAS for local caches, and can be configured to seamlessly (and invisibly to the user) pass data storage from local storage into the cloud. Multi-site Enterprise clients can use local caching to save space on-site, which the Synology C2 pool can be used for accessing GoFile links for external downloads (side-stepping local bandwidth bottlenecks). 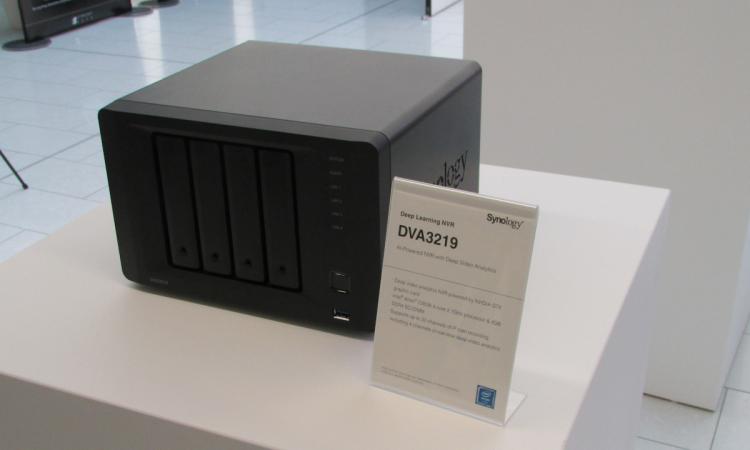 Not even the world of NAS is free of developments in AI and deep learning, an in-trend aspect of computing recently. This year Synology are introducing the DVA3219, a Surveillance Station NAS system that leverages an on-board NVIDIA GeForce GTX hardware to process video and metadata for deep learning analytics.

Deep Learning as a tool is still its early days in this form, but Synology did offer two current applications for the technique:

- People Counting - as a straightforward example, determining the number of individuals entering an a sales floor by monitoring a video feed.
- Recognition - Identifying who a person is, how many are in a crowd, or behaviour is putting them at risk (e.g. entering a restricted zone etc.).

The better the data a deep learning system has to work with, the better the resultant analytics. Camera Frames Per Second and useful resolution within the frame are of course ideal in that respect, which is also necessary in determining lens curvature and focal range.

A white paper for this functionality is available from Synology on request, and it could be a modest start in a field of increasing importance much sooner than we think.

Rounding out the software announcements at Synology 2020 was optimisations for the DS Cam smartphone app for dashcams. This app will can now be accelerated by hardware on the smartphone (if present), greatly improving responsiveness, while the UI in general has been tweaked for intuitiveness. Apple Airplay support has also been introduced, one of a number of improvements to Apple and MacOS support in Synology NAS systems rolled out in updates this coming year.

Of course, while they weren't a focus this time around, Synology did have a selection of new hardware to announce which will be available in the very near future:

Furthermore, support for fiber-channel network cards will be available to selected models, offering an easy-to-deploy storage solution with great cost/performance ratio for SAN environments. And while they weren't a particular highlight of the event, we can still expect to see incrementally refreshed consumer NAS solutions to be released throughout 2020.

There are currently 139 user(s) online:
Google