The 900D Takes Corsair Obsidian Chassis To A New Scale 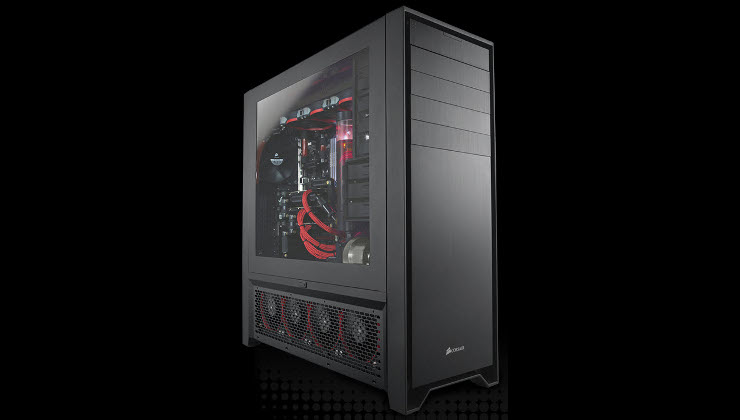 CES has often been a haven for the weird and wonderful, and this year Corsair have taken it to heart with the release of the latest in their Obsidian range of PC caes: the 900D*. Dialling the principles behind the 800D all the way up to 11, the 900D is designed for modders and system builders who want utmost flexibility in watercooling options, n-GPU configurations, storage drive space and power requirements.

The chassis remains in the prototype stage at the moment, but key features have been released. Defining the 900D are internal dimensions which allow for up-to HPTX-size motherboards - that's 10 expansion slots, dual-CPU and quad-GPU configurations - far larger than the 800D's maximum of EATX. The placement of the motherboard tray has also been adjusted to allow for more cable management space, helping builders keep what's visible as neat as possible.

One significant criticism of the 800D was the air flow. Recognised as an excellent water cooling chassis at the time of release, air cooling suffered due to poor air flow inside the cavernous interior. Obviously the 900D could have had similar issues, but after taking notes from the improvements seen in the Vengeance chassis line Corsair have added fan mounts to the HDD cages, aiding air flow. 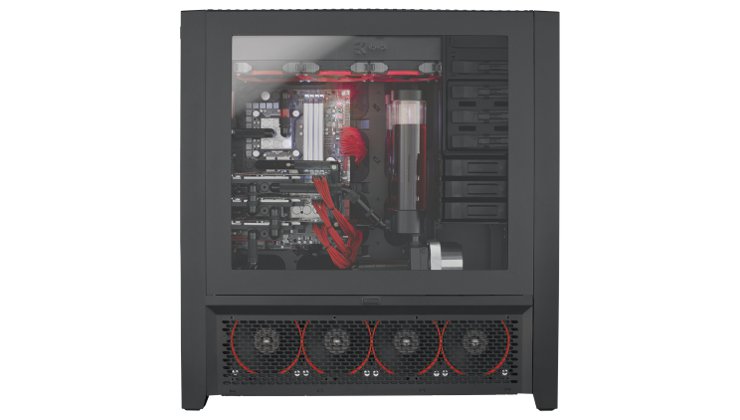 As good as it may be as a chassis for air-cooled components, the 900D should come into its own through water cooling flexibility. It comes outfitted with five independent radiator mounting points consisting of a 480/420mm in the top, 480/420mm and 240mm in the floor, 360/240mm in the front and 140/120mm in the rear - ample for most high-end watercooling setups without any modding.

To improve stability and rigidity - crucial for chassis as large as this - Corsair have used a cast aluminium fascia surround which additionally serves to complement the fascia's brushed aluminium finish. The appearance has been configured to be best when no optical drives are installed, but those who still need these devices will find the effect as 'in-keeping' as possible. Corsair have also chosen to eschew an fan controller entirely, perhaps recognising that buyers of such high-end equipment will likely configure preferences all the way down to such small details, and hence a one-size-fits-all approach wouldn't be suitable or necessary.

In terms of cost, first whispers are that the 900D will be priced at $349, around $50 more than the 800D. That's still a pretty penny, but well below the initial rumoured pricing of close to $400. There's no news yet on release date but it's likely to be some way off.

For more information visit Corsair.com in the coming months as the product is finalised.

There are currently 155 user(s) online:
Google