The new Intel 8 series motherboards from ASRock are now waterproof

We've been updating you with some of the new features on the upcoming Intel 8 series motherboards by ASRock, such as higher quality onboard sound with a built in headphone amp, HDMI pass through support and upgraded WiFi technology. However, this new feature is possibly the most exciting. 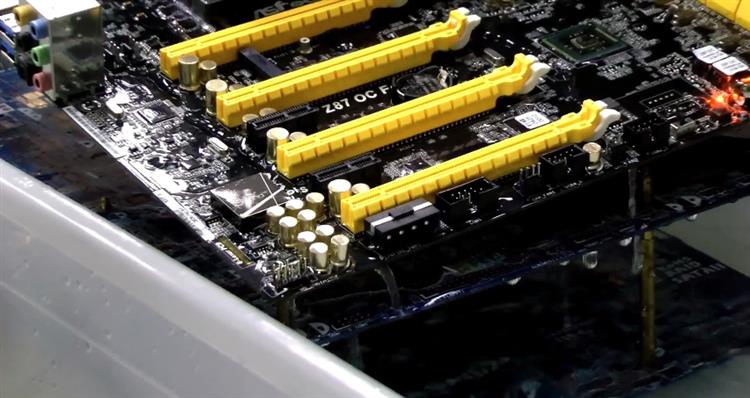 There has always been an increased risk in destroying valuable hardware by integrating something into a PC that really doesn't mix well with electronic components. Water cooling has become increasingly popular among enthusiast's and ASRock has kept all this in mind with their newest feature.

Conductive liquids such as water pretty much destroy all kinds of electronics on contact. That's why ASRock has implemented a special layer of Conformal Coating on our motherboards, which makes the motherboards invulnerable to conductive liquids, corrosion and dust. Users won't have to worry about spilling liquid nitrogen, liquid helium or even clam chowder over their motherboards while overclocking.

*Conformal Coating may protect the motherboard against conductive liquids, but only to a certain extent. To avoid damaging your computer and other components, we still advise users to keep liquids a safe distance away.

Don't believe them? Well, check out the demonstration video below.

As you can see this motherboard is perfect if you want to add your own water feature inside your case. ASRock have released a disclaimer on the video saying:

The pins need to stay conductive therefore they are not covered by Conformal Coating. The water in this video is designed to avoid the pins which still risks of short circuit.

It's unlikely that anyone really expected the board to be completely water proof but the video does show how a leak from a water cooling system could occur and not destroy the board. However, that isn't all the Conformal Coating protects the board against. Included in the list is dust, corrosion and extreme temperatures.

What do you think about a water proof motherboard? Is it unnecessary or is it truly innovative?