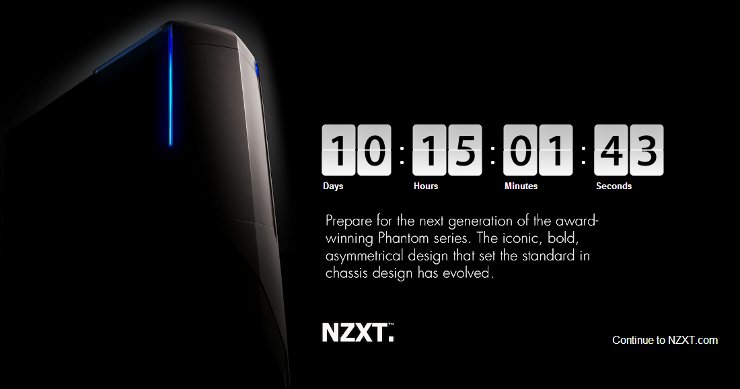 New to NZXT's website is a countdown, slowly but surely winding its way down to 6am UK time on the 15th October. Quite clearly they're teasing a new Phantom, but just what sort of Phantom? Here is some conjecture:

1) The current Phantom still holds a fairly strong position in the full-tower market. The design was tweaked some time ago to add USB 3.0 support, and so apart from internal support for water cooling and XL-ATX motherboards, a major redesign likely isn't required of the original.

2) The Phantom 410 is the ATX version of the Phantom, and has been marked by both more extensive watercooling support and a wide variation of colour schemes. If anything, replacing this design is even less likely.

3) NZXT's Switch 810 was very well recieved, especially amongst water cooling enthusiasts and those with XL-ATX motherboards seeking a more affordable but well engineered option without giving up many mid-tower features.

The most probable design change to the Phantom therefore is one to make it both larger and have more extensive support for 360mm/420mm radiators (both front and top), possibly even supporting dual-CPU motherboards such as the EVGA SR-X. This theory is bolstered by a leak of an online etailers Facebook competition which explicitly stated a prize as the "NZXT Phantom 820".

Our best guess is that the new Phantom will be internally very similar or identical to the Switch 810 (no shame in that by any means), with fascia and roof thematically reminiscent of the original Phantom's asymmetric aesthetic. Exactly how well it performs is anyone's guess, but those who want to go down the water-cooling route may just want to hold off on a new chassis till the 15th.

« PowerColor Introduces The Dual-GPU 7990 · The Phantom: Evolved · Intel Z87 To Have All 6Gbps SATA, Dispense With Legacy I/O »