The Tahiti-Based AMD HD7870 LE Comes To The UK 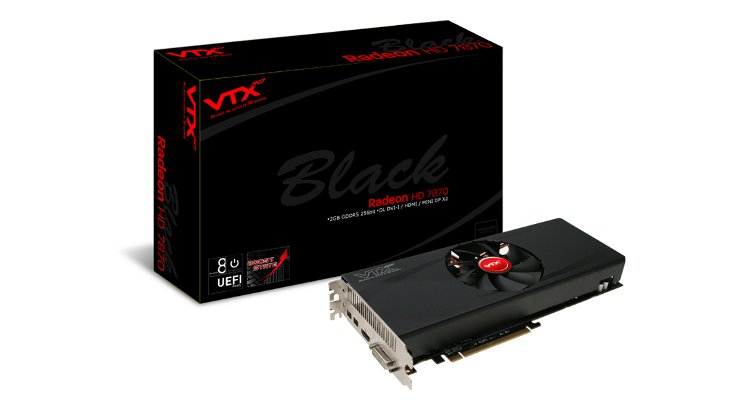 It's been a little while since the last AMD GFX card release, and the latest one is the sleeper release of a SKU based around a salvaged GPU from the Tahiti line, 'salvaged' as in doesn't quite make the cut for the higher value SKUs but are functional enough for lesser SKUs. This line has till now been the central part of the 7900-series, with the full-fat version as the core of the HD7970 and a slimmed down model featuring in the 7950. The new SKU is slimmed down once again from the 7950 'Tahiti Pro' core, and straddles the specification gap between the 7950 and Pitcairn XT-based 7870.

'Tahiti LE' is the shorthand most are using for these salvaged Tahiti GPUs these, and AIBs are selling the GPUs under the 7870 SKU. These Tahiti LE chips feature 1536 GCN shaders rather than the 1280 in the standard Pitcairn HD7870's or 1792 in reference HD7950 designs, clocked at a reference base frequency of 925MHz. The memory bus of these suped-up HD7870's is same as the standard - 256-bit for its 2GB GDDR5 RAM - which may cause some bottleknecks at very high resolutions but are nonetheless ample for most gamers.

Aria are the first UK etailer to list the HD7870 'Tahiti LE' Edition, with their flavour being the VTX3D Black Edition HD7870 which is clocked at 925MHz with Boost Clock to 975MHz. Club3D also have the HD7870 jokerCard, though it's not yet known if they will reach these shores in significant quantities. The MSRP of these cards has been pegged at $270, and Aria have listed a £200 inc. VAT RRP (though they are currently on sale for £15 less than this). There have been some rumours that other AIBs will be fitting Tahiti LE GPUs to standard HD7870 models, but that is very much unconfirmed.

Early reports of the capabilities for theses cards are very good, with the potential for excellent value for money. In many benchmarks they perform close to the 7950 thanks to the increased shader count and high clocks, amply surpassing the normal 7870, but the flip-side is that high voltages tend to make them some of the more power inefficient cards in AMDs GCN range. Overclocking potential isn't quite clear, and the salvaged nature of the part will probably make it even more down to the so-called silicon lottery than usual.

Note also that these cards cannot be paired in CrossfireX configuration with Pitcairn-based 7800-series models, but will operate in tandem with Tahiti-based 7900-series cards.

If you're looking for a new mid-to-high range GFX card this Christmas these cards may be just the ticket, SKU confusion notwithstanding. It would make everyone's task much easier if these were called 7930's or 7890's though.

« Want To Record WiiU Footage? Hauppauge Shows You How. · The Tahiti-Based AMD HD7870 LE Comes To The UK · Cryteks chief: Nothing will beat Crysis' graphics for at least two years »