The Thermaltake Core X71 TG, Core X31 TG and Suppressor F31 TG Tempered Glass edition cases will be featured at the upcoming CES 2017 convention and will be available in the market in January 2017.

Improved Style and Space
The Thermaltake Core X71, Core X31 and Suppressor F31 Tempered Glass edition cases feature an enlarged window design to maximize viewing of the component inside. To further improve the visuals offered by the cases, Thermaltake includes a 140mm Riing blue LED fan for you to enjoy. Moreover, the tempered glass features 4mm thickness that guarantees the durability of the window. It is more scratch resistant compared to acrylic windows. 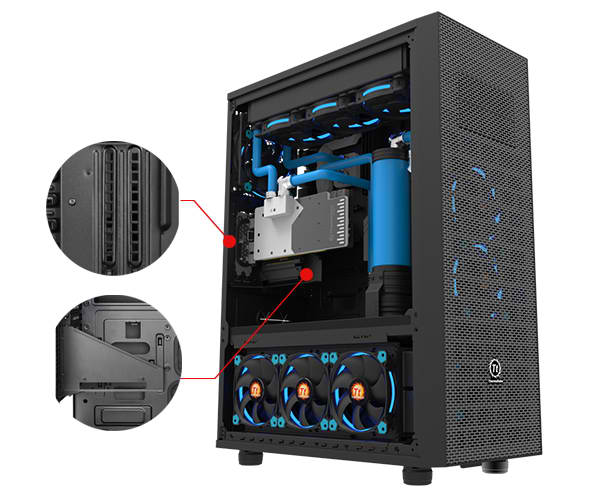 Specially designed with dual GPU placement, the Core X71 and Core X31 has the support for vertical graphic card layout with dual PCI-E slots design. The PCI-e riser cable is optional. The riser GPU support bracket prevents sagging for long graphics card and also helps to reduce the weight on the motherboard. When vertically installed, you can showcase the water block on the graphics card better compared to the conventional horizontal orientation.

Exclusively Tt LCS Certified
Like the rest of the Thermaltakes cases, the three tempered glass edition models are Tt LCS Certified. It is a Thermaltake exclusive certification applied to products that pass the design and rigorous hardcore enthusiast standards that only the worlds best LCS chassis are held to. The Tt LCS certification was created so that Thermaltake can clearly convey to power users and enthusiasts which chassis are built and tested to be best compatible under extreme liquid cooling configurations. This ensures users get the best performance, compatibility and features.