At the second day of the worlds largest IT and computer trade show CeBIT 2011 in Hannover, Germany, Thermaltake debuts their latest mid-tower gaming chassis, the Chaser MK-1. At this worlds first debut the Chaser MK-1 shows off a design language that is clearly inspired by modern games. Strong lines and all black coating inside and outside in combination with blue elements lend it its very dynamic and powerful looks. The pulsing logo on top only add even further to the overall mighty appearance. Being the very first XB (extra big) ATX mid tower chassis, the Chaser MK-1 is extra wide, thereby allowing for enough space to install particularly big and powerful CPU coolers of up to 18 cm height. An entirely tool-less design for the hard drive trays makes installation and removal of 3.5 HDDs and 2.5 SSDs a childs play

Advanced Cable Management
Users can properly separate cables and channel them through the grooves strategically placed on the back of the case. Not only does a properly cable managed computer perform better through improved airflow and ventilation, but also makes the system organized for future upgrades.

Water-Cooling Ready Design
With the popularity of performance water-cooling solution for PCs, a true gaming chassis of course has to over this upgrade bath as well. Should the user wish to integrate 120mm or even 240mm water-cooling, the top fan can be easily removed and the water-cooling radiator can be quickly installed. Liquid cooling hose holes in the back also warrant for the installation of external liquid cooling systems.

Optimized Airflow and Convenient Dust filters
Powerful gaming rigs are equipped with demanding components that require proper cooling where optimized ventilation is of utmost importance. Being the industry-leading brand in PC thermal management, Thermaltake incorporated two 200mm fans into the Chaser MK-1. An additional 140mm TurboFan is also embedded into the back of the case. Each of the 200mm fans can be controlled via the ColorShift control on the top of chassis. ColorShift enables user to take full control over the color LEDs on each fans to match the gaming or working environment. Fan speed control acts as a turbo boost control which users may increase the fan speed to properly exhaust heat build-up during gaming session or to lower the fan speed while working or simply browsing the web.

Multimedia connectivity at its best
In addition to these features, the Chaser MK-1 has implemented every premium feature a PC enthusiast or hardcore gamer would want. High-speed data transfer can be achieved with two SuperSpeed USB 3.0 ports on top as well as an eSATA port and two additional USB 2.0 right on the top of the case. HD audio for headsets and microphone are easily accessed by the top connectors. Each intake fan comes with dedicated filter system and can be easily removed for cleaning without having to open the system. Furthermore the Chaser MK-1s feet elevate the chassis some centimeters from the ground, so airflow from the bottom right to the top

For more information on Thermaltake go to the website:
www.thermaltake.com 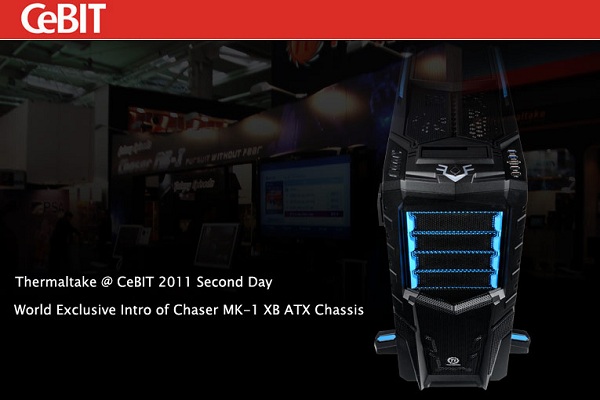