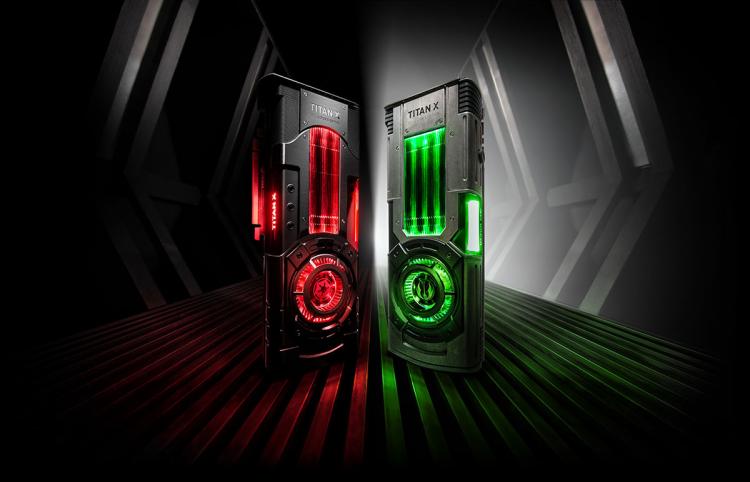 UPDATE: No sooner was this story posted than NVIDIA went live with official news of the Collector's Edition. Two new variants of the GTX TITAN Xp arrive as Star Wars licensed products, with Galactic Empire or Jedi Order theme, and will be available to pre-order from November 8th for registered GeForce Experience users.

Both designed are based on the GTX TITAN Xp, meaning that the cards incorporate the full-fat GP102 GPU and 12GB GDDR5X memory for blisteringly fast gaming performance at even 4K resolutions. The chief difference instead appears to be the cooler, which is now themed around black/Red Galactic Empire or Steel/Green Jedi Order livery.

The models, which also include a display case and certificate of authenticity, are priced at £1,149 inc, V.A.T. in the UK. Pre-orders begin tomorrow open exclusively to GeForce Experience users. More info is available at https://www.nvidia.co.uk/geforce/products/10series/star-wars-titan-xp-collectors-edition/

Last week NVIDIA's GeForce GTX 1070 Ti was finally made available to consumers, and you might have thought that this was it for 2017 from the green team. That's not the case however, as the following teaser on their official Youtube channel indicates:

Yes, NVIDIA are preparing a Collectors Edition of the GTX Titan X. A third iteration of the flagship model in the GTX 10-series and the fourth graphics card to be built around the GP102 GPU, it may (or may not) supersede the GTX Titan Xp at the very top of the Pascal totem-poll.

There doesn't appear to be very much further for the SKU go to with a Collectors Edition, at least in terms of performance. The Titan Xp, which launched in April, already uses a fully unlocked GP102 with 30 Shader Modules for a total 3840 CUDA cores. Even on the memory side there's not much scope for improvement as the card features 12GB of GDDR5X clocked at 11.4Gbps.

One direction could be better base and boost clock speeds alongside aggressive binning to help keep temperatures under control. Equally, we may be looking at this from the wrong angle, with card itself releasing as a vanilla (28 SM) Titan X with modified cooling solution integrating more RGB LEDs into the aluminium shroud. At this point, who knows...

In whatever guise the Collectors Edition lands however, don't expect it to be a cheap option. Both the Titan X and Xp launched with and MSRP of $1200, and any pull-back from this pricing tier would be quite surprising.