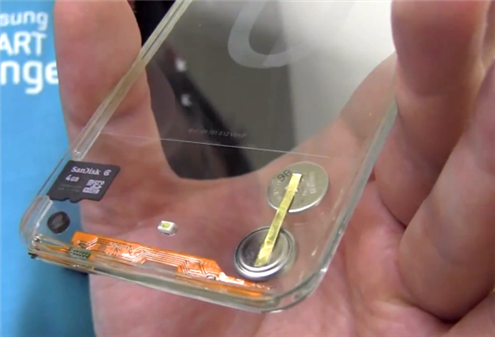 Polytron, a Taiwanese technology company that specialise in anything 'glassy' has created a see-through prototype smart phone. Originally only available to Tony Stark in the Ironman movies, a see through smart phone has many benefits with the biggest being that it is incredibly awesome and you are guaranteed to get plenty of girls (or guys) by owning one. Okay that may not be true but they would be incredibly awesome.

With many smart phones today all looking similar, a transparent phone is definitely a welcome change. While it may not be to everyone's taste is is certainly a step in the right direction in terms of innovation. The prototype as it stands today, however, is a little lacklustre. It isn't able to make calls and isn't fully transparent due to limitations with modern technology and doesn't feature an OS which is a real pane*. The SIM card, SD card and microphone can be clearly seen but may be hidden behind an opaque panel or darker glass so as to not ruin the look and feel. The phone may also have technology based on their Polyvision glass.


While this is still in the extremely early stages of development Polytron plan to have some working prototypes by the end of the year. We'll definitely keep our eye out for this and bring you more updates as/if they appear.

Tell us what you think? Is it awesome, sad, so crazy that it just might work or is it something else?

* We are fully in favour of the odd pun at Vortez.