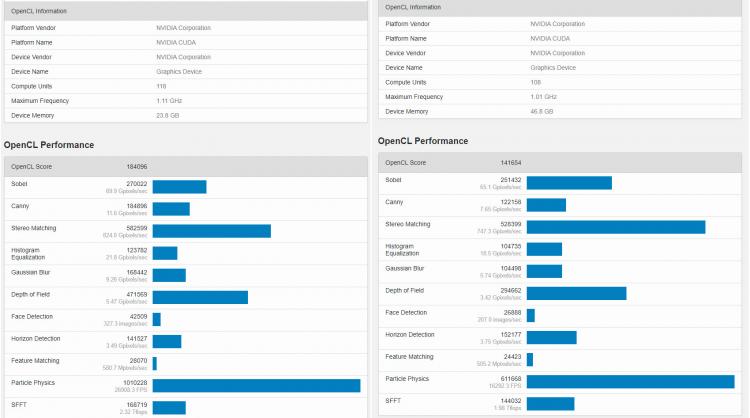 NVIDIA's Games Technology Conference is scheduled for March 23rd, and the world is expecting some big things from the green team. Based on previous history new technologies are almost a given at this point, particularly in the realms of deep learning, automotive AI and ray tracing, but if we're lucky we may even get a glimpse of a new GPU architecture for consumer or datacentre environments. Some signs are indeed pointing to that, as exemplified by two entries which have been uncovered on the GeekBench OpenCL database sporting previously unknown NVIDIA hardware.

Entry number one, datestamped October 31st 2019, is of an 118 Compute Unit NVIDIA GPU equipped with 23.8 GB of VRAM (type not listed) clocked at 1.11 GHz. Assuming no changes to NVIDIA's 64 CUDA cores per Compute Unit norm, that would represent a total of 7752 CUDA Cores. To put that in perspective NVIDIA's previous largest GPU, the V100, has 5120 and the RTX TITAN sports 'only' 4608.

This GPU scored a blistering 184096 points in GeekBench's OpenCL benchmark, putting it comfortably above any other single-GPU result to date.

GeekBench entry number 2, datestamped November 29th 2019, is of a smaller GPU with 108 Compute Units that's equipped with a gargantuan 46.8GB of VRAM and clocked at 1.01 GHz. The number of enabled CUs on this part indicates that it's a salvaged variant of the larger GPU above, and even that may not be true potential of the fully-enabled chip.

This GPU reached an only slightly less ostentatious 141654 points, and still more than you would expect from a Volta-based TITAN V. In fact only the full-fat Tesla V100 might out-pace it in this particular workload.

The sheer amount of VRAM (be it HBM or GDDR6) likely rules these cards out as intended for consumer markets, but they give a fascinating window into what's possible when NVIDIA transitions to 7nm and phases out Volta for Compute workloads. We don't yet know if this architecture is the much-rumoured Ampere, or takes things a generation further as a preview of Hopper; with luck NVIDIA will be reveal more soon.