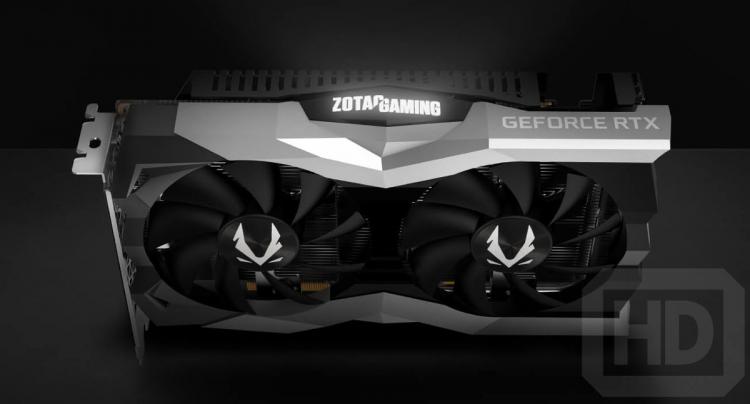 The Macau-based manufacturer are marketing the cards under the ZOTAC GAMING brand, aping the affectations of the other major NVIDIA and AMD partners. The two SKUs revealed are the GeForce RTX 2060 TWIN FAN, likely to be the more affordable of the two that's most closely aligned with the reference specification, and the GeForce RTX 2060 AMP! EDITION, which should be the most heavily factory overclocked of the set. Each is equipped with the same dual-fan cooler, a compact design similar to that used in their GeForce RTX 2070 MINI which likely also utilises their 'IceStorm 2.0' integrated feature-set.

RGB enthusiasts may be disappointed to discover that these cards have a relatively plain grey and silver colour-scheme. To complement it only two white LED lighting zones are present on the shroud, intended to give the card a neutral look that is easier to pair with user systems. The choice also keeps the costs down; not only in terms of parts, but also development of RGB lighting control software that can operate independently as well as play well with other third-party implementations.

Other obvious features include a backplate heatspreader (not always present on mid-range xx60 cards) and 8-pin PCI-E power connector. If the PCB layout is identical to that of the ZOTAC RTX 2070 MINI, the display outputs will also be a single DVI-D, three DisplayPort and single HDMI 2.0 which between them support up to four displays simultaneously. A VirtualLink connector is conspicuous in its absence from this model.

More images are available at HD-Tecnologia.com. The release date for NVIDIA's RTX 2060 series of cards is expected to be announced during their CES 2019 Keynote on January 6th.