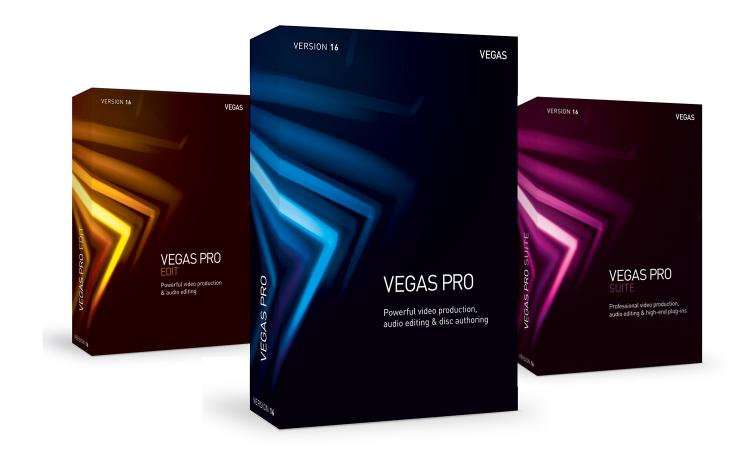 VEGAS Pro 16 delivers the groundbreaking improvements to solidify the software's well-earned reputation as the leader for professional video creation. It now includes professional-level Video Stabilization so that even the shakiest camera footage can be salvaged with ease, and cutting-edge Motion Tracking so that any object on screen can be tracked and edited with a range of options and filters and effects can be added to tracked objects for color grading, blurring, pixelization, and more. Powerful Dynamic Storyboarding features enable the creation and organization of rough cuts and alternate sequences with a speed unrivaled by any other video editor. Multiple Storyboards allow for easy experimentation with different video cuts, allowing users to quickly switch between alternate project edits to compare and create. VEGAS Pro 16 now offers an end-to-end workflow for High Dynamic Range color (HDR) so it is compatible with professional HDR-capable cameras, monitors, and other hardware. Now VEGAS Pro users can deliver HDR content with stunning color and detail along with important metadata. Full 360° video support has been introduced so 360º video productions can be edited to meet the growing demands of the emerging VR market.

With these headline additions, plus a wide array of other new features (see below) VEGAS Pro 16 is now, more than ever before, the logical choice for fast, intuitive, and creative, professional-level video productions.

Gary Rebholz, Product Owner for VEGAS Pro says: VEGAS Pro has always been the fastest way to create professional videos, but with version 16 we've once again set the bar for professional video and audio production. With innovative features and efficient workflow additions, including several important tools and options the VEGAS Pro community has been waiting for, we've taken the next critical step in building the new-generation video editor. The fastest video editor on the planet just got even faster!

VEGAS Pro 16 features a powerful, native motion tracking tool that enables the user to track the movement of an object through the video frame and edit it with a range of options. For the first time ever, this allows VEGAS users to apply spot color grading, pixelization, or isolated color grading and correction to moving objects. Also, it is possible to "pin" titles to the tracked object so that text automatically follows movement. The new motion tracking opens a variety of exciting possibilities for projects, especially in combination with the Bézier Masking tools, filters, and effects.

The world-class video stabilization engine has been designed from the ground up with the latest technology. This results in faster, more efficient, and more accurate stabilization then in previous versions of VEGAS, even with 4K media. The redesigned video stabilization is an essential tool for modern handheld production techniques and offers speed, simplicity, and a nondestructive workflow with flexible settings to achieve precise results. It's also been designed to take advantage of newer multicore processors, so owners of high-powered, modern PCs can enjoy speed and precision.

This powerful tool speeds up the cutting process and fosters creativity. Dynamic Storyboarding can be used to easily assemble rough cuts and alternate sequences so multiple ideas can be compared quickly. Thanks to the interconnected storyboard and timeline, any edits made on the main storyboard are directly reflected in the project timeline, while multiple additional storyboards allow for experimental edits and cuts.

The further improved Hover Scrub feature makes it incredibly easy to locate specific video frames using a mouse with a thumbnail of the project in the Media Window. Project Media thumbnails can now be adjusted in size, enabling finer Hover Scrubbing and more accurate location of specific video frames. Users can now drag a bin to the timeline, including all of the media in storyboard bins, in order to add video events into the project timeline simultaneously rather than having to add files individually.

With High Dynamic Range (HDR) support, users can now take advantage of the latest advances in color technology to deliver amazing HDR quality including ultra-realistic video with stunning colors, richly textured blacks, and even the detail in bright spots that may have been blown out before. All aspects of the HDR workflow are covered including import, real-time HDR preview, HDR-aware video scopes, render to HDR with metadata, and even integrated, one-click HDR publishing directly to YouTube. It is now possible to complete a project from start to finish in full HDR with VEGAS Pro 16.

VEGAS Pro 16 includes support to meet the growing demands of the 360º video market. It includes templates for many of the most popular cameras such as the Samsung Gear 360, LG 360° cam, and Ricoh Theta. Users have the option to match their project properties to their 360º footage. VEGAS Pro 16 can stitch together dual-fisheye video and import 360 video stitched by cameras or other software. The workflow allows you to render 360º video files including Scene Rotation or the Tiny Planet effect.

VEGAS Pro 16 offers the flexibility of multiple options when it comes to backing up projects, so if a user is working on a complex project, or one that is pushing the very limits of their PC, they can enjoy complete peace of mind. Users can back their work up after a set time which can be determined in minutes and hours, as well as daily backups. Projects can be saved and backed up automatically after every edit. All backups can be saved to the same folder as the project file, a temporary location, or any user-defined location.

VEGAS Pro 16 is available in four versions. VEGAS Pro 16 Edit is the base option, but still offers the complete VEGAS Pro feature set including all the new features such as Motion Tracking, Video Stabalization, and HDR Support. VEGAS Pro 16is the standard version with additional software including Boris FX Continuum Lights Unit plug-in (a $195 value) for incredible lighting effects, proDAD VitaScene V3 LE (a $199 value) with 100 video effects, and VEGAS DVD Architect for professional DVD and Blu-ray authoring. VEGAS Pro 16 Suite is the ultimate video-editing package with all the new features and professional extras including the FXhome HitFilm Ignite Pro (a $200 value) bundle's 180 plug-ins, the proDAD VitaScene V3 PRO (a $599 value) package of around 700 effects, and the Boris FX Sapphire Lighting Unit (a $595 value) set of spectacular natural and synthetic lighting effects. With VEGAS Pro 365, users get all the power and functionality of the regular VEGAS Pro 16, but enjoy future updates immediately upon release, full support, plus the VEGAS Pro 365 exclusive plug-in FXhome HitFilm Ignite 360 Toolkit (a $49.99 value) all for a low monthly fee.

VEGAS Pro 16 is now available online and in stores worldwide. To order, or for more details, please visit the VEGAS Pro website.