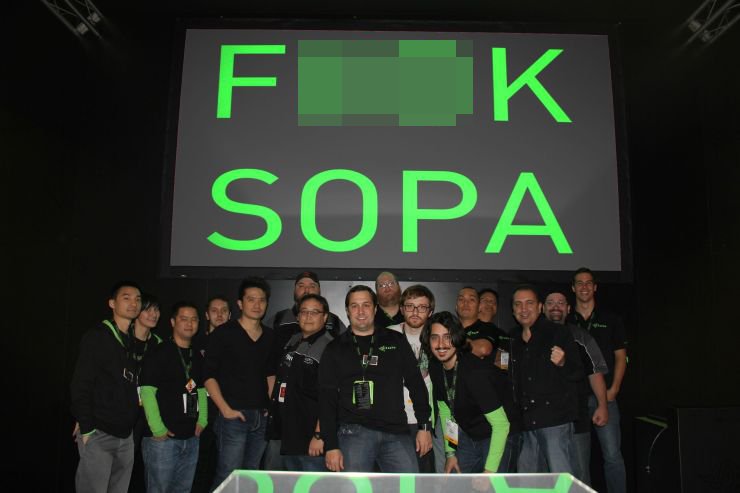 Razer give their considered stance on SOPA

A blackout by popular websites Wikipedia, Boing Boing and Reddit will go ahead tomorrow from 5am GMT to highlight the dangers of SOPA and PIPA, two Bills currently making their way through the US House of Representatives. Supported by rights-holders RIAA MPAA etc, SOPA and PIPA would give litigious groups the power to prevent access to foreign-based websites with little oversight; some mainstream interpretations of the enforcement section also indicate that these provisions may apply to US-sites too, doing away with the Safe Harbour exemption currently in effect.

Online businesses, opinion makers and experts - such as Google, Youtube, the Wikimedia Foundation and EFF - have roundly condemned the Bills as anti-democratic, anticompetitive and poorly implemented. The chief method of enforcement, DNS blocking on a per-ISP basis, is also seen as so flimsy that it would not impact genuine pirates but be enormously damaging to innovation and freedom of speech.

SOPA is currently seen by some as dead following an effective online campaign focussing on lack of oversight and the apparently poor job Congress has made in scrutinising enforcement measures; this, despite a lack of coverage in traditional media. The protest has also been helped by companies such as NVIDIA and Razer coming out as anti-SOPA or at least neutral publicly. PIPA in the Senate by contrast still appears to be progressing considerably more slowly, and with support from the White House wavering it's possible that it will be dropped too. However Wikipedia, Reddit, Boing Boing et al have chosen to follow-through with their black-out to raise the profile of issues in these Bills and attempt to ensure that they are not passed through the back door (such as by way of Amendments to other Bills or a rushed vote).

European readers may be wondering what all the fuss is about. Those wanting some background on SOPA would do well to read the well-sourced Wikipedia article on the subject, and noting that US-EU trade treaties tend to inherit and incorporate US legislation over both territories when it comes to copyright.