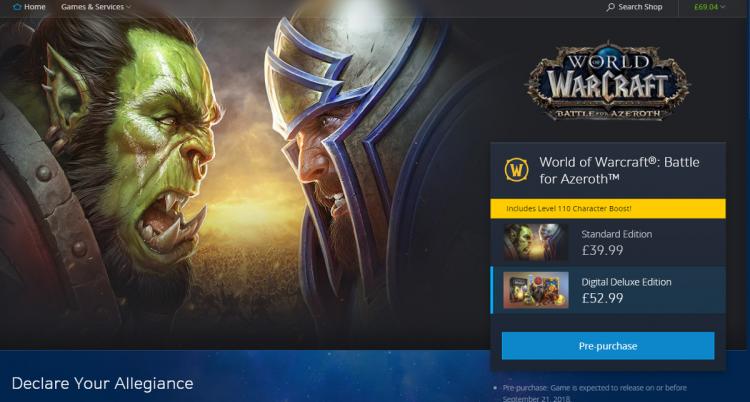 World of Warcraft's Legion expansion is drawing to a close, with players taking down the final Raid en-mass and concluding the story of defeating Sargeras and his Burning Legion. Since Blizzcon 2017 attention has turned to Battle For Azeroth, Blizzard's seventh expansion for WoW; today, finally, a few more details as well as pre-purchase information has been revealed.

Pre-purchases for Battle For Azeroth have just gone live on the Blizzard Store. A Standard Edition is available for £39.99 Inc. V.A.T. ($50), while a Deluxe Edition is pegged at a more pricey £52.99 ($70). Both versions come with an immediate character boost to lvl110, the current level cap.

A boxed 'Collector Edition' will likely be on sale near to launch, but the specifically digital perks in that Edition will be available through the Deluxe Edition. These include two new racial mounts, a cute in-game pet, and perks for other Blizzard franchise titles such as a Hearthstone card back, Overwatch sprays and a Heroes of the Storm mount.

What pre-purchasing does not guarantee however is access to the Battle for Azeroth Beta. It appears that this will follow the usual process of random invites according to your Beta opt-in preferences.

Also unlocked with Pre-purchases is access to a new set of 'Allied Races', unique racial models for either the Horde or Alliance factions. Other in-game content also needs to be completed to unlock and play these races, but most players who have been engaged with content over the course of Legion should be well on the way to reaching these requirements. Some, in fact, will be ready to play these races immediately. Other Allied Races, most noteworthy of which are the Zandalari Trolls and Dark Iron Dwarves - will unlock after BfA launches.

Speaking of launch, Blizzard have indicated that they expect the expansion to release on or before September 2018. This is similar to Legion, which had a launch window of 'Summer' and was eventually released on August 30th 2016.

Blizzard's online store is currently being hammered by activity, but if you're happy to bear with the queue you can start the pre-purchase process now. Check out Battle.net for more information.

There are currently 839 user(s) online:
Google