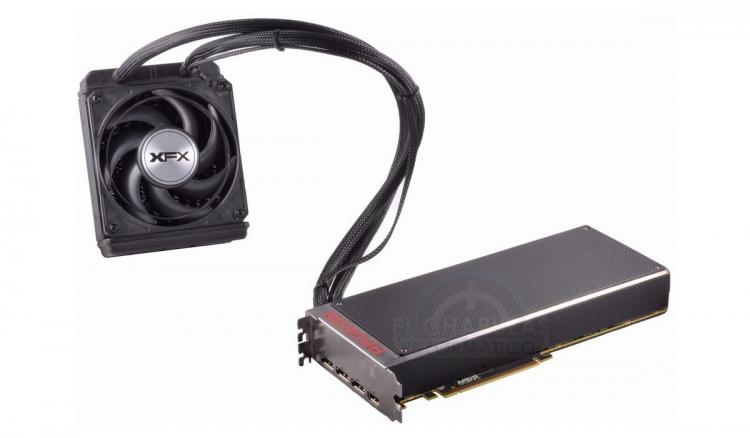 Coming via VideoCardz.com is a new leak on the Radeon Pro Duo, AMD's upcoming premium dual-GPU card for gaming, VR and software developers based on the Fiji GPU architecture found within the Fury and Fury X graphics cards.

ElChapuzasInformatico, a Spanish tech site, have got their hands on images of an XFX-Branded Radeon Pro Duo in addition to release and pricing information. The images show what appears to be a reference design Pro Duo with integrated water cooling loop, featuring one waterblock per GPU and a standard 120mm radiator with fan. Even with this elaborate cooling system it will have its work cut out dealing with the estimated 350W card TDP, perhaps signalling that AMD are working similar magic to the R9 NANO in terms of keeping heat down whilst retaining high performance per GPU. There's strong speculation that the cooling system is manufactured by Cooler Master, even though the reference cooling for the dual-GPU R9 295X2 was of Asetek design.

It's anticipated that the Pro Duo will ship with two fully-enabled Fiji GPUs that have 4096 shaders and 4GB HBM memory clocked at 500MHz (for a total of 8192 shaders and 8GB VRAM). Reference GPU clock speeds are expected to hit 1000MHz, a little under the 1050MHz of the R9 Fury X, but the aggressive power tuning featured in the Fiji architecture make this figure somewhat moot. With three Displayport 1.2 and one HDMI 1.4 output the card should handily support at least four displays simultaneously.

The pictured XFX-branded Radeon Pro Duo indicates that at least the first round of cards will be reference designs rebadged by the major AIBs. Given the tight control AMD have exercised over this generation of GPUs it seems unlikely that non-reference models will be released in the near future, but this will hopefully mean that the retail cards are all of invariably high quality.

According to ElChapuzasInformatico the card will be sold for 1695 inc. V.A.T. (VAT @ 20%), compared to the $1500 MSRP price tag AMD placed on the card when it was announced at the Capsaicin event last month. That's about 100 higher than you would expect from a straight $ to +VAT conversion, but may vary depending on retailer. A similar conversion would put the UK pricing from £1249 to £1349 inc. VAT.

That is expensive, even for a card at the very top of the market, and speaks to its presumed intended audience: developers. The Radeon Pro Duo has an enormous amount of horsepower on tap, far more than any single-GPU card currently on the market, and would work best in a situation which allows it to bring its TFLOPS to bear. Continuing lacklustre Crossfire multi-GPU driver support for games, as well as the cost of the card compared to two discrete R9 Fury X's, should dissuade all but the most enthusiastic of AMD's gaming enthusiasts.

AMD's Radeon Pro Duo should be available from retailers worldwide on April 26th.

There are currently 679 user(s) online:
Google