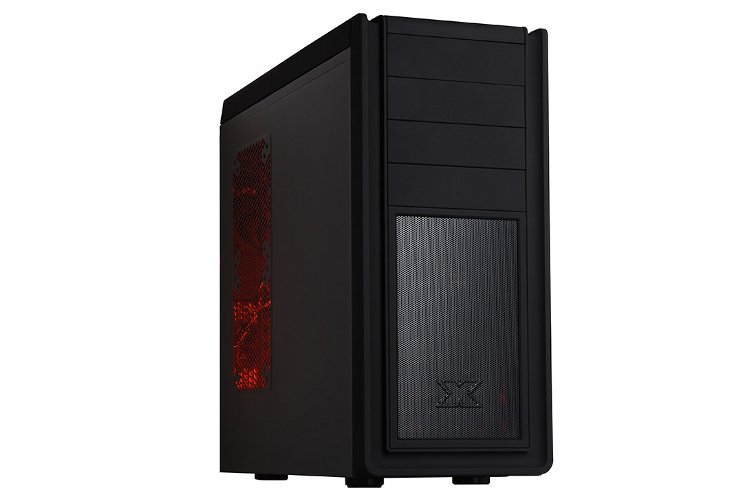 For some time we've looked at cases in the £50-80 bracket as typical 'gamer' cases - bold styling themes, busy designs and often garish trim. That's not to label them as 'bad' per se, creating a case (or any product) which appeals to all is an impossibly task; it's often easier to add design flourishes to enforce a brand image than keep it plain but appearing to be of good quality. Recently however the <£60 market has seen feature-packed cases with plain fascia's which look almost as at home in an office as a bedroom. This market is crowded though, and so it's difficult to be noticed.

Enter Xigmatek, a fairly well-known brand with good budget pedigree in the Midguard - a staple of system builder budget ranges - and Utguard - up there with the best of the £50-80 cases at the time. Since the release of the Utguard, Xigmatek have concentrated on the awesome Elysium Super-tower whilst being relatively quiet in the lower end of the market. The Midguard II therefore has a hell of a legacy to live up to. 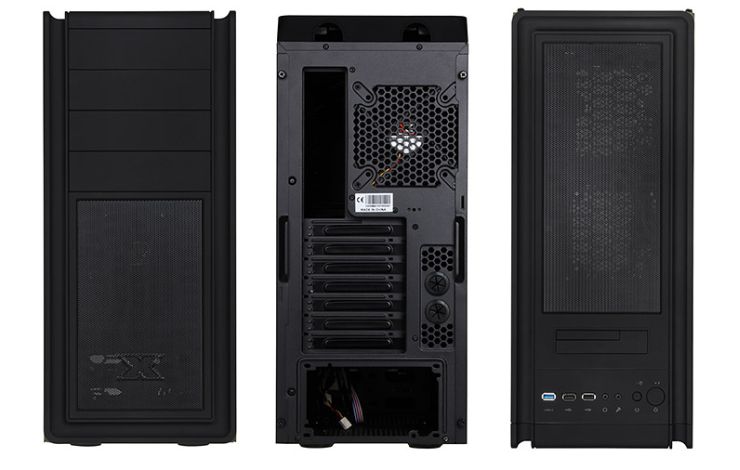 As you can see, the Midguard II eschews frills in favour of an all-black design but still looks like a member of the Midguard family. It utilises a "Leather-Touch" rubberised finish which gives it a premium matt finish in the photos similar to that of their competitors, and is a great addition to low-cost cases which would otherwise have a quite unpleasant ABS-plastic feel. In common with many budget cases that ship with few cooling options, the side panel is perforated steel design rather than windowed or unencumbered by additional cooling options. The Midguard is bundled with two 120mm fans, and has space for an additional one in the front, two in the top, two in the side panel and one at the bottom. The front air intakes protect your system from dust by including a filter.

The Midguard II doesn't skimp on I/O either. It features a USB 3.0 and two USB 2 ports which both connect via headers on a supporting motherboard, as well as a hot-swap bay for 2.5" and 3.5" HDD/SSD's. Two audio ports, nominally for stereo sound and microphones, are also present. Unique for a case this size and in this price range, the Midguard II also claims native support for slim-line CD/DVD players and includes a front panel modification for that, though this isn't present in the attached press images. Finally, with tool-less support for 6 2.5/3.5" HDDs drives and extra-long graphics cards by utilising the removable drive cage, this case seems truly 'suitable for all'. 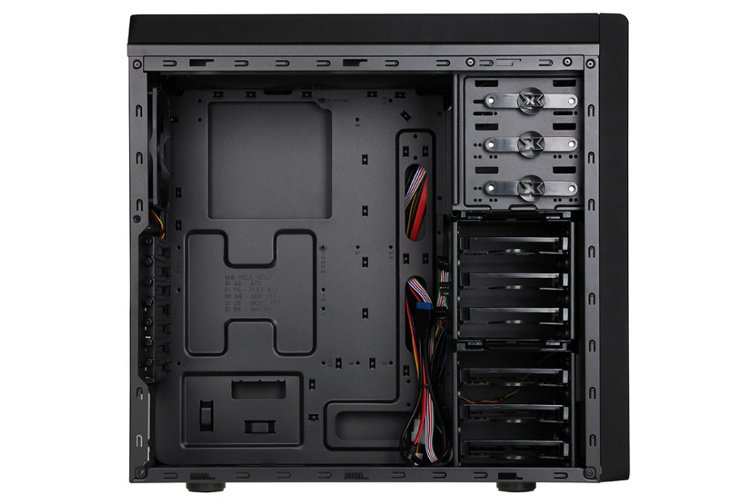 The Midguard II is available immediately from Caseking.de for 69.90 euros, and so should come in at approx. the £60 mark in the UK. Definitely a case to keep your eyes on. For additional details see the full text of the press release below or visit Caseking.de.

Berlin, 9th of November 2011  The successor of the popular Midgard Mid-Tower is getting ready to step up to the plate. Xigmatek has once again managed to fill the Midgard II with a long list of unique features for the demanding PC enthusiast. Just to name a few: USB 3.0, a rubberised surface by the name of "Leather Touch", a hot-swap bay in the top, room for up to eight fans and a 280 mm radiator - all for an unbelievably low price!

When Xigmatek presented the original Midgard in 2009 as their first chassis, it managed to capture the hearts of PC users all over the world. The reviewers praised it, the users loved it. This secret behind its continuing success is quite simple: at the time, the Midgard was at the top of its game in terms of technical aspects by offering eSATA, hard drive trays and screw-less installation methods along with the possibility to route water cooling out the back of the chassis.

On top of that, it impressed with space for a large number of fans and excellent cable management possibilities. Xigmatek was one of the pioneers behind the all black interior which has now become a standard in the industry. Even though the original Midgard offered such extensive features, it took the market by storm because of the unbeatable value. The question remains if Xigmatek is able to repeat this success with the new Midgard II. The answer is clear: YES!

On the exterior, the Midgard II utilizes the same metal mesh accents as the original Midgard, but Xigmatek goes a step further by employing a new surface material, proof that the designers have are always at the forefront of the newest developments in the case market. The top and front panels of the chassis feature this new surface by the name "Leather Touch", which resembles that of some of the best gaming mice in the world.

Behind the dust filter protected front mesh, there is space for two 120 mm fans, with one such unit being present out of the box to cool the hard drive bays. A second unit has been placed in the rear of the chassis to expel hot air out the back. Two 120 or 140 mm units may be installed in the top of the case, while the side panel also offers space for two additional fans. Lastly, there is one more spot in the floor of the Midgard II, next to the dust filter protected opening for the bottom mounted power supply. This PSU bay is lined with foam to eliminate vibrations with the help of the four rubber mounts on which the power supply rests.

The Midgard II also offers an extensive cable management system with multiple openings and clips, making a clean interior a definitive possibility, while the large hole under the mainboard tray allows for easy access to the CPU cooler backplate. In addition, the chassis also features water cooling holes and a screw-less system for the three 5.25 inch slots, while the PCI slots are secured with easy to use thumb screws.

A brand new feature is the docking station in the top panel of the chassis, allowing you to utilize the hot-swap capability of modern hard drives - including the newest ones with SATA 6Gbps. Due the dual-cover design, it can easily be equipped with 2.5 or 3.5 inch units. Op top of that the Midgard II features two current USB 3.0 along with two USB 2.0 connectors and a pair of audio connectivity. Another unique feature is the possibility to install a slimline optical drive without blocking one of the 5.25 inch bays. Xigmatek includes the appropriate tray and front cover for such a usage scenario.

The Midgard II can hold up two six 2.5 or 3.5 inch hard drives, utilizing separate hard drive trays. 3.5 inch units can be installed without the use of additional tools, thanks to the embedded metal pins in each tray, For those with extra long graphic cards up to 33 cm in length, the top cage may be removed to free up the required space.

With this long list of features, along with the Xigmatek "Mono Cool" fan controller to control up to three fans, the Midgard II manages to deliver all the attribute to become just as successful as its predecessor, while continuing to deliver an unbelievable price point.

The Xigmatek Midgard II Midi-Tower - black will be available at the end of November for a price of 69,90 Euro exclusively at www.caseking.de. Further details about the chassis can be found at http://www.caseking.de/midgard.