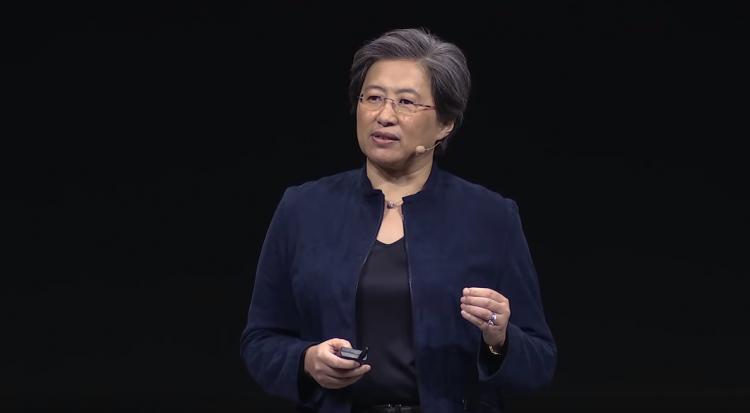 On Monday evening AMD CEO Lisa Su took to the stage at CES to deliver their first keynote of 2020, setting the stage for a new year in computing. A lot has changed in 12 months; Zen 2 debuted and made a huge impression in almost every CPU market, while the latest Radeon hardware returned some respectability to the mainstream GPU competitive landscape. So the question was - what do the red team have in store for 2020, or at least its first half?

A 64-core edition Ryzen Threadripper HEDT CPU has long been mooted as a technical possibility thanks to the existence of EPYC's ROME equivalent, and was pre-announced not long after the release of their 32-core/64-thread Ryzen Threadripper 3970X. A true champion of AMD's HEDT lineup, their Ryzen Threadripper 3990X is equipped with eight fully active Core Complex Dies for a total of 64 CPU cores supporting 128 independent threads. It puts even the 3970X in the shade with absurd performance potential in multi-threaded applications, while a clock of 2.9GHz boosting to up to 4.3 GHz should keep it on the straight and narrow in more lightly threaded scenarios. 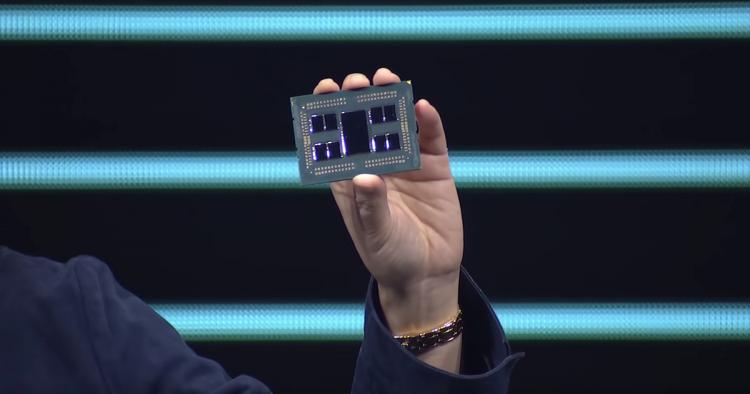 The Threadripper 3990X was inevitable as a desktop counterpart to EPYC's 64-core server/enterprise SKU, and a relatively eye-watering price is also to be expected. While $3990 is higher than any other previous HEDT CPU, those to whom the capabilities of the chip is well suited will be licking their lips in anticipation. Quad-channel memory support and fewer PCI-Express 4.0 lanes will however maintain a clear distinction between the 3990X and EPYC's enterprise grade flagship.

Selective canned benchmarks rarely tell the full story but, in comparing it to Intel's Dual Xeon Platinum platform, AMD's flagship ate the competition for breakfast and had room left for elevenses, at a fraction of the price. Even in idealised scenarios 30% is a huge performance differential that Intel will be scrabbling to overcome in their next-generation Scalable Processor series.

AMD's Ryzen Threadripper 3990X debuts on February 7th, but recent launches have indicated that stock will be hard to come by. 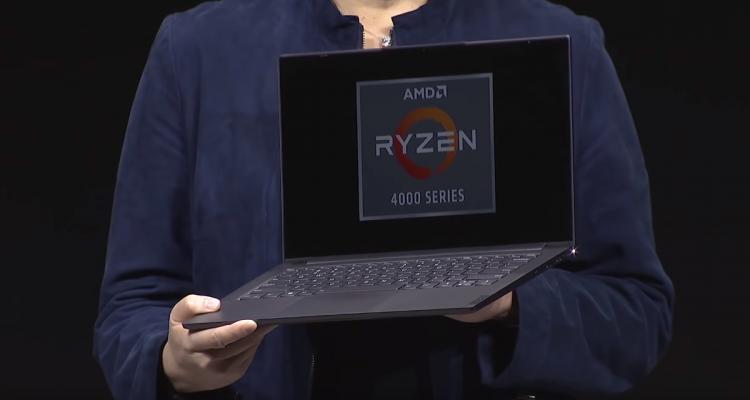 AMD's Ryzen 3000-series APUs are based on the older Zen and Zen+ architecture, rather than incorporating the advances of Zen 2. From Q1 however brand new 4000-series APUs will be available to challenge Intel's dominance in the laptop domain, aided by the engineering of major OEMs. Even more so than desktop, cracking this mobile market will be a true test of Ryzen's performance within confined power and thermal configurations.

As a headline the introduction of 8 core, 16-thread 7nm APUs into laptops - including 'Ultrathin' designs - isn't a bad one. Intel rolled out 8-core laptop CPUs last year but thus far failed to spur widespread adoption, perhaps AMD will have better luck with an architecture brand new to the segment. 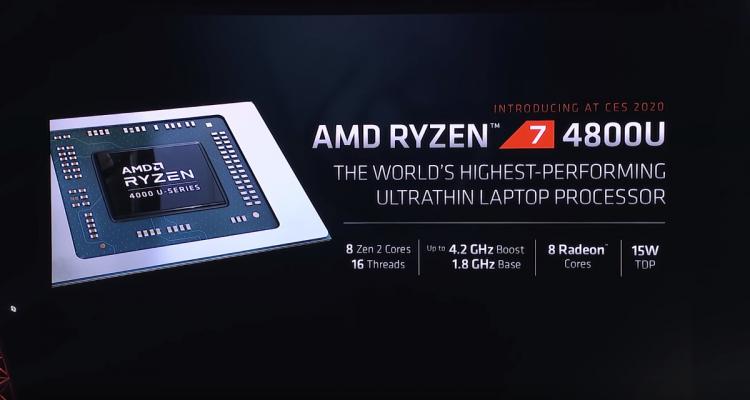 This generation of Zen 2 APUs differ significantly from Ryzen 3000-series CPUs, and not just through the addition of Vega-class graphics. The die is monolithic rather than of a chiplet design, which has additional implications on performance (particularly memory latency) that will make for very interesting in-depth analysis when the details become available.

AMD also claim that the Vega graphics of the 4000-series has been updated in the transition to 7nm, offering substantially more performance per Compute Unit. Up to eight CUs will be available on each chip (depending on the SKU), but at this point in time RDNA graphics architecture is absent outside of discrete GPUs.

The 4000-series will arrive in two major series - 4000U SKUs, designed for ultrathins and a TDP of up to 15W; and 4000H SKUs, sporting a less constrained 45W TDP for performance-oriented laptops. Once again AMD have opted to re-used Intel's nomenclature rather than reinvent the wheel and introduce yet more new terminology into the market. They will get some criticism for that, but hopefully not too much.

In both 15W and 45W guises AMD's 4000-series APUs will make aggressive use of dynamic overclocking to maintain performance requirements within thermal and power limitations. Compared to desktop processors base clocks are modest (although both 45W parts are relatively aggressive at close to 3GHz), and push up past 4GHz under ideal conditions. AMD's SenseMI laptop equivalent will need to work overtime to keep the chips in check and at levels safe for their chassis.

Bolstering the budget end of the spectrum will be Athlon 3000-series APUs, with a TDP of 15W and two cores clocked at up to 3.3GHz. These chips are based on the older 14nm Zen lineup, and will help to make the Ryzen Mobile ecosystem more all-encompassing.

As we mentioned earlier, the ASUS Zephyrus G14 will be one of the first laptops to be equipped with a next-generation Ryzen APU upon release in Q2 2020, while other OEMs such as Dell and Lenovo will be getting in on the action from Q1. AMD expect up to 100 Ryzen-powered laptop models on the market before the end of 2020, representing a dramatic reversal in manufacturer confidence even if demand is as-yet unproven. Competition will be much sterner as Intel will be solidifying the presence of 10nm Ice Lake-powered systems in the market, a marked difference to the current desktop landscape.

AMD's final major announcement was of the Radeon RX 5600 XT, a GPU that might be the 5000-series' final member. This 7nm RDNA SKU was leaked at the end of December and is now confirmed with January 21st launch date and $279 MSRP.

The card is pitched directly against NVIDIA's GTX 1660 Ti, the best performing of their non-RTX lineup, and comfortably surpasses the chip according to AMD's own projections (objective tests may vary, of course). It will be released in partner variants only, so reference specifications should be treated as a guideline only.

Given the fairly limited 6GB frame buffer it's not all that surprising to see the card sold as the 'ultimate 1080p GPU', but almost $300 for a card billed as not well suited to 1440p gaming will be a tough sell indeed. Expect it to nonetheless be put through its paces at 1440p, which may inadvertently seal its fate.

Joining the 5600 XT is the vanilla Radeon RX 5600, a 32 rather than 36 CU part but with an otherwise identical core frequency and memory subsystem specification. It's possible that like the Radeon 5500 this GPU will only be available to OEM markets, but a ~$230 GPU would fit nicely between the 5500 XT and 5600 XT in the customer market.

Other AMD technologies are being demoed for the first time at CES 2020, many of which will be formally rolled out when the new hardware arrives later this year, but one other piece of news worthy of mention is a subtle change to FreeSync branding as we move into 2020. Now hard pressed to maintain mindshare due to the widespread adoption of NVIDIA's 'G-SYNC Compatible' as a moniker for premium displays supporting VESA adaptive sync standards, AMD are simplifying their terminology to better delineate display capabilities.

FreeSync will be the label ascribed to any display that meets base level support for AMD's tech., with no regard for response times, adaptive refresh rate window etc. That's likely to maintain legacy support for the branding on older monitors with less rigorous implementation.

FreeSync Premium will define monitors that also support AMD's Low Frame Rate Compensation (LFRC) technology. These displays need to have a wide adaptive refresh rate window with maximum at least 2.5x the minimum, and are much more appropriate for gaming.

AMD haven't detailed if a new in-hiuse testing and certification program is in place for these monitors (as there is for G-SYNC Compatibility), or if adherence to standards is merely assumed. Hopefully it's the former.

So, there's plenty to discuss from AMD at CES 2020, with more to come no doubt. They've been closed-lipped about both 2nd Gen RDNA and Zen 3, both of which were expected to be at least mentioned at the event, and so don't be surprised if a few discreet leaks occur towards the end of the week. As it stands however Computex is the most likely venue for news on AMD's next generation of desktop hardware.