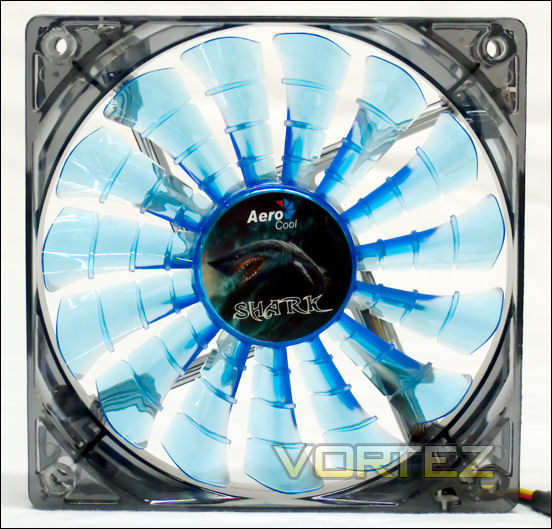 The AeroCool Shark 12cm is a 120mm 15-bladed fan that has three ribs on each of its blades. This particular model has dark blue LED's. Here is what AeroCool has to say about it: 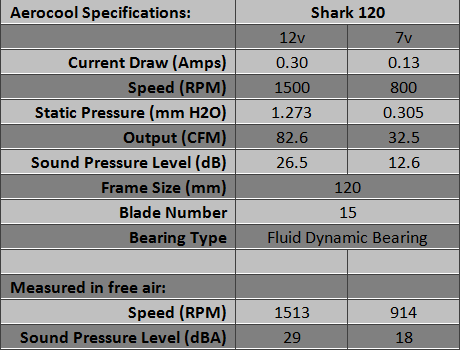 Overall, the subjective impression of this fan is that it seems to make too much noise at 12 Volts. However, at 7 Volts the fan is quiet. At neither speed is there any parasitic noise and no clicking. You can direct its output upward without feeling increased vibration. At seven Volts this is a very well-behaved fan.

The Molex adapter does not have an RPM feed for the motherboard, but it has close-fitting handsome black sleeving, as do all the wires associated with the Shark. The Anti-vibration Screws are only about 30mm long (not quite 1.25 inches), so they are too short to pull through; you must have access to the corners of the fan to use these. The fan and its kit are quite attractive, as is the box it comes in. 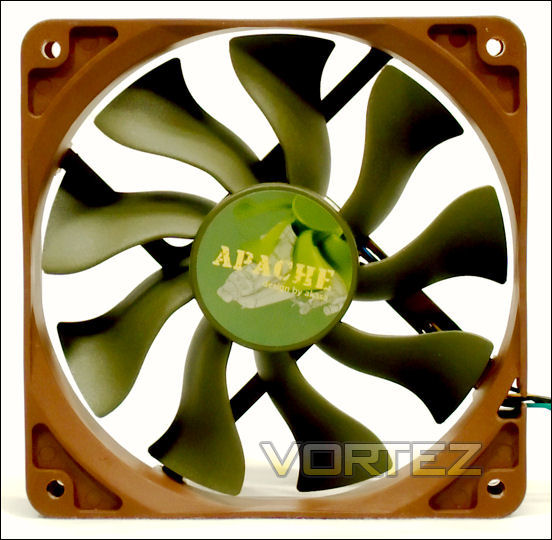 The Akasa Apache is a 120mm PWM controlled fan. It has wavy fan blades that look like the blades of a turbofan engine, such as you see on jetliners. Dont be fooled, though. These are just wavy blades.

Akasa has this to say about their AK-FN057:

PWM is a widely available feature on all current Intel and AMD platform based motherboards. It is more accurate than voltage regulation, energy saving and a fully automatic way of controlling the fan speed. PWM provides ultra quiet acoustics during normal PC use and high performance cooling under high system load. The Optional Akasa AK-CB002 cable adapter can provide the system with two additional PWM connectors if needed. 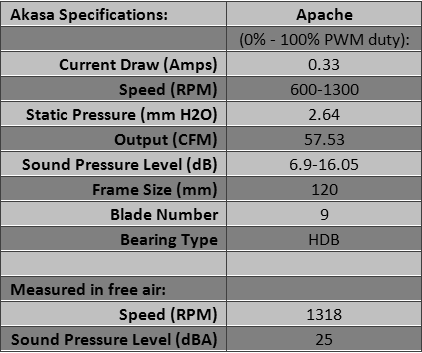 Inside its box, the Apache comes in a plastic case that contains four extra-long vibration isolators in addition to the fan. Their length makes them easy to pull through and grab. Akasa also makes a Viper fan that is very much like the Apache, but faster.

The PWM functions of the Akasa Apache were tested, using a grounded PWM wire for 0% PWM duty, and a Zalman PWM Mate to approximate 25%, 50%, 75% and 100% PWM duty. A quiet click can be heard a few inches away. To hear a faint click you must put your ear right up to the fan. 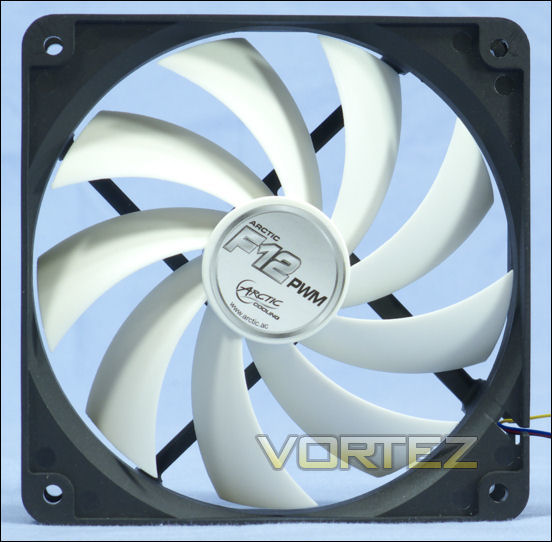 The F12 PWM is the PWM version of Arctics traditional-frame 120mm fan (they also sell a cage-type fan). They have this to say about the F PWM series:

Dedicated to operate 24 hours a day, 7 days per week, the F PWM CO series case fans cool your computer system quietly. The fan forwards the PWM signal from the CPU to the whole case ventilation system. Employing a Japanese dual ball bearing, the fan operates with reduced friction and hence its lifespan is substantially extended. The series offers you with superb performance while maintaining your computer systems under optimal temperature at all times.
Product Page: Here 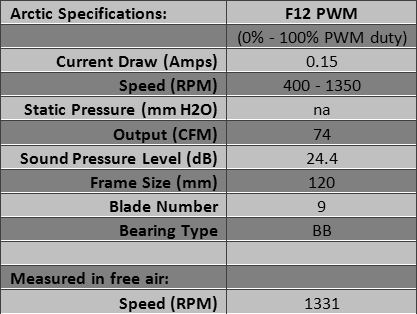 Arctic adds this under Quick and Easy Setup:

Via a single PWM signal, the CPU fan is controlled by the mainboard to maintain the ideal temperature of the CPU. The patented PST (PWM Sharing Technology) forwards the PWM signal to all other fans within the system so that all fans are spinning at the same speed. Such mechanism ensures silent operation when it is idle, but also gives sufficient performance when the demand comes.
Not only does the setup pass the PWM signal through to the next fan, but it also politely passes the next fans RPM signal back through to the motherboard. And if you dont have another fan (it need not be PWM), the fan has its own RPM line to report its speed to the motherboard. The only fly in this ointment is Arctics use of fine wires throughout. But considering that this fan is usually sold inexpensively, the wire gauge was clearly a tradeoff that had to be made.

The PWM functions of the Arctic F12 PWM were tested, using a grounded PWM wire for 0% PWM duty, and a Zalman PWM Mate to approximate 25%, 50%, 75% and 100% PWM duty. A quiet click can be heard a few inches away. To hear a faint click you must put your ear right up to the fan.