The RedMouseR Two was tested against a selection of mice and on three different surfaces - specifically the Razer Deathadder, Razer Diamondback, Ozone Radon 5k and the Microsoft Laser Mouse 8000. I also used both the Ozone TRACE mousepad, a Boogiebug soft mousepad and my own desk (wood laminate) for testing.

First things first - as you could see from the specifications and the product images I put in the review the RedMouseR Two does not utilise a weight system - its 190g listed weight is all it can and ever will be without physical modification. As a gaming mouse this could be considered a bit of a handycap however personally I found its weight to be pretty good - I would say though that the majority of that weight seemed to be concentrated at the rear of the mouse. It's certainly not too light though... the Deathadder weighs in at a featherweight 135g!

Now first up... apologies for going over old ground again but as I've said a few times before I've had issues in the past with laser mice exhibiting tracking issues during high acceleration movements. The problem manifested itself as a lack of point to point accuracy during a mouse sweep. The mice I had issues with (before returning to infra red optical mice for a period) were the Saitek GM3200 and the Razer Copperhead. Again... neither of these were remotely bad mice, I just got the impression that they weren't doing exactly what I'd asked during these extreme usage moments.

Installing the RedMouseR Two was easy peasy thanks to the model being plug and play. No need for driver downloads or utility suite installs. I used it with XP, Vista and Windows 7 and each time the mouse was installed without question. 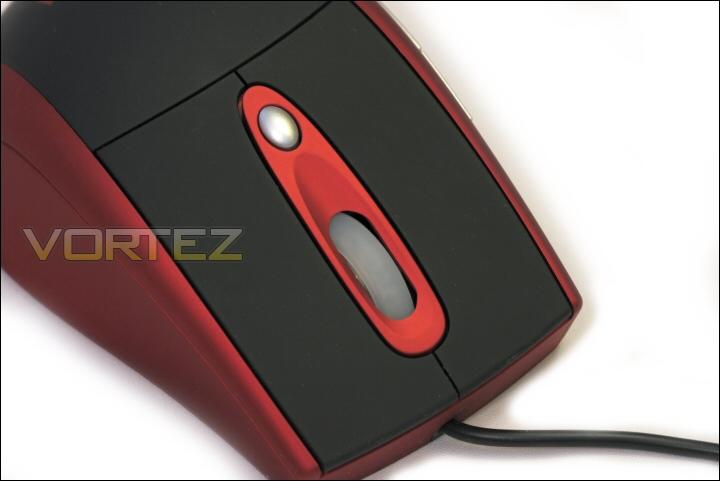 I'll begin with the negatives of which there are some but not many. The first is the somewhat plasticky feel of the mouse. Although it feels solid the plastic build does give it the feel of a budget peripheral and along with the dribble of paint from the overspray goes some way to confirming that it isn't a premium piece of hardware. This is somewhat disappointing when you consider that the two Gigabyte mice that Dave reviewed a little while ago can be purchased for a similar price and even Logitech's now legendary MX518 can be purchased for just £1 more.

The other obvious negative was the DPI switch system that I touched on during the product tour. This mouse really needs an obvious status indicator - my first suggestion would be a traffic light style system showing green, amber and red for each DPI resolution. Of course if Airen wanted to stick exclusively to the red theme (in many ways the root cause of the issue I've raised here) then they should have possibly had a 'triple LED' level meter with one LED illuminated to signify 3000DPI, 2 lights for 3500DPI and all 3 lights for the highest 4000DPI setting.

I also believed that the scroll wheel would be another negative to add to those above as it was painfully stiff to rotate and offered little to no feel. I am however happy to report that the wheel loosened up after 30-45 minutes usage and now feels remarkably natural. It's somewhat similar in feel to the Deathadder's in that it offers a very smooth action with just a hint of a click as it switches. Certainly a negative that turned into a major positive!


Now onto the actual testing - Office usage first so let's see how the RedMouseR Two copes. Accurate tracking, good button placement and nice button action mean it's a very positive experience. The ergonomic shape sits well in the hand (mine are probably average to large in size) and the high position of the back and forward buttons means accidental presses are all but eliminated. I used this for a couple of days at work and it certainly compared favourably to any other mouse I've used.

Of course the RedMouseR Two is sold as a gaming mouse so time to get playing! I used Far Cry 2, Crysis Warhead, Blacksite and COD4. I was honestly quite astonished at the performance. At this point the Microsoft Laser Mouse 8000 almost instantly had to bow out. That is not a gaming mouse and it really does show. The Diamondback did better but ageing ergonomics and an older set of optics means it feels a little whooly compared to the others. My impression with the remaining three mice was that the RedMouseR Two was not able to match the Deathadder but it did get close to the Radon 5k. Accuracy was commendable even during fairly high acceleration movements - I will say that I tended not to use the 3500 and 4000DPI settings as for me they were too sensitive but 3000DPI seemed to offer the best combination of speed and control.

The only negative comes from the ergonomics of the unit. The shape is in my opinion a winner however the spray painted sides are quite smooth so during high pressure gaming with clammy hands grip levels do suffer. The Radon 5k is encased in a rubbery coat and the Deathadder is so light that it's upper coating of rubber is sufficient to control the mouse at any given moment. In the case of the RedMouseR Two when its weight is combined with the low grip side surfaces it is sometimes a little difficult to hold. Bear in mind that this is only at extremes and for the most part the mouse and its ergonomics work perfectly well!