With a total width of 143mm, the asymmetrical heatsink ensures an optimized airflow through the heatsink for any 140/120mm fans.

With a maximum depth of only 55mm all memory slots can be populated  even if high heatspreaders are used on the modules.

All contact surfaces between fins, heat pipes and baseplate are soldered.

The six U-shape heat pipes have a large contact area to the full copper base plate to optimise the heat transfer from the CPU. By precision CNC machining, the surface of the base plate is extremely flat. 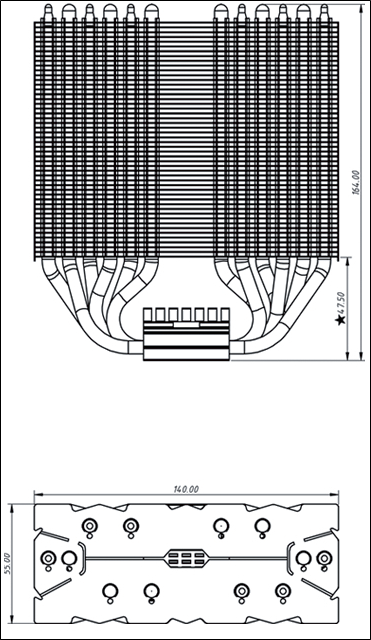 The Himalaya finds itself slotted between the Matterhorn and the dual-tower K2 according to Alpenföhns marketing. It is part of a new generation of SlimTower coolers, as dubbed by Alpenföhn, in the hopes of tackling the growing concerns of compatibility between high-end air coolers and tall memory heatsinks. In previous reviews, we found no such issues with the Thermalright Venomous X which to this day is still one of the best heatsinks around. Despite that, manufacturers have been keen to design narrower heatsinks to settle this problem once and for all. The reasoning is justified given the number of times I see people querying whether a heatsink is compatible with a particular set of RAM, but my personal viewpoint remains that people should always opt for low profile memory. Nonetheless, the demand is still there and if the likes of the Venomous X can handle high heat loads with similar efficiency to the Noctua NH-D14, there is no reason why SlimTowers cant do the same. The first attempt at such a concept was of course from Thermalright themselves in the form of the ]Archon and Alpenföhn are following suit with their Himalaya so its hard not to draw comparisons between the two.

In terms of dimensions, the Himalaya is 164mm tall, 6mm shorter than the Archon so case compatibility is less of a problem. There was a degree of irony when the Archon turned out to be too tall for the majority of mid-tower cases when it was so focussed on memory compatibility instead. The Himalaya should face fewer issues here as a result. Depth-wise, the two are very similar; the Himalaya being 55mm and the Archon less deep by 2mm. For comparison, a single radiator on the K2 is 50mm deep. Finally, the Himalaya is 140mm across whereas the Archon is substantially wider at 155mm. Although the dimensions favour the Archon in terms of cooling surface area, it is important to note the design of the Himalayas fin stack.

The Himalaya uses a standard aluminium and copper construction for the fins and base respectively. The six 6mm heat pipes are also made of copper. As usual, the Alpenföhns construction feels very robust. A noteworthy addition is the supplied Wing Boost 140mm fan. At a rated speed of 1100RPM, it produces less airflow than Thermalrights TY-140 fan (73CFM) and marginally less than Noctuas NF-P14 (64.92CFM) but the rated noise level is lower. Alpenföhn have also continued their tradition of supporting all sockets dating back to the AMD K8 days and Intels LGA775.

For a lightweight, SlimTower cooler, the Himalaya promises much so lets take a closer look at what it offers.