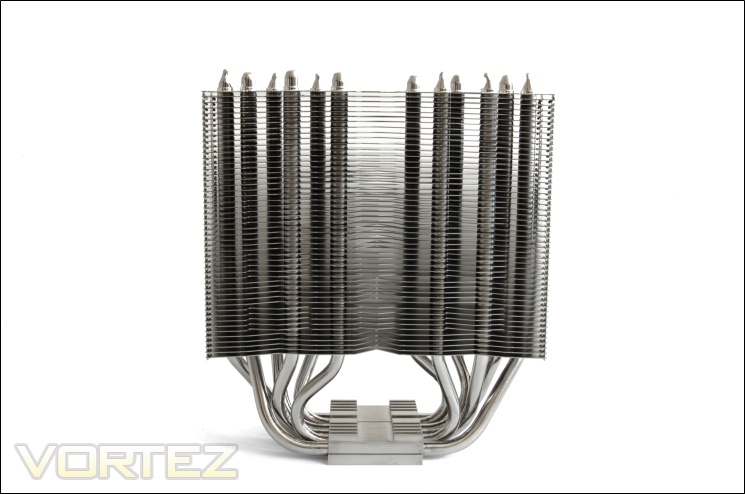 The front face of the cooler
The front face reveals a very densely packed fin array comprising of 50 flat, laminar fins separated by a mere 2mm. This reflects the design of the K2 rather than other heatsinks which favour a 2.5mm spacing instead. It means that fans with higher static pressures are favourable over high RPM and airflow alone. Compared to the Thermalright Archon, the Himalaya has one less fin. The dimensions give each surface an area of approximately 7700mm squared, 50 less than the Archon and with 1 fin less, the Archon comes out on top. The fins are all parallel to each other so apart from the distinctive geometrically shaped fins, nothing else contributes to increasing turbulence through the heatsink. Unlike the Archon, the width of the front face isnt overly disproportionate at 140mm so we dont expect compatibility issues with adjacent expansion devices. Through the array, we can also see the U-shaped heat pipes rising as columns. 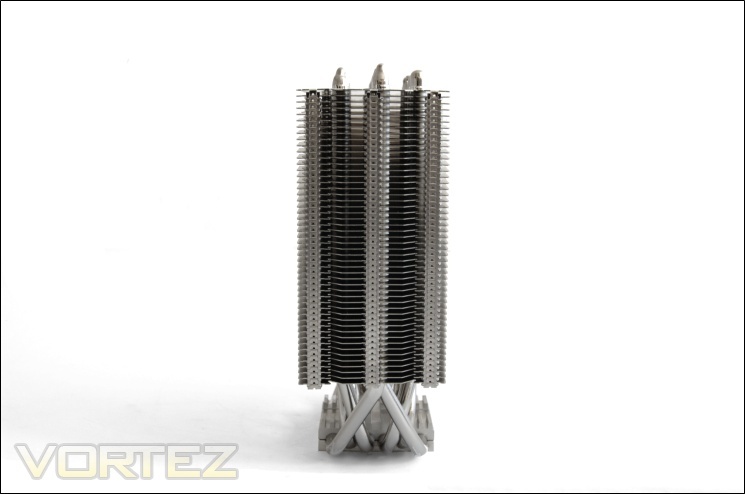 The side profile
The side profile highlights how narrow the heatsink is at 55mm. The heatsink protrudes hardly further than the dimensions of the base, a good indication that memory compatibility will be ensured. The sides are also opened unlike the K2s closed fins. We also observe the notches keeping the stack supported, complimenting the heat pipes. The heatsink features a slight asymmetry so that the thicker half is at the back and therefore does not come in the way of memory modules. As Alpenföhn state, it enhances flexibility during installation. 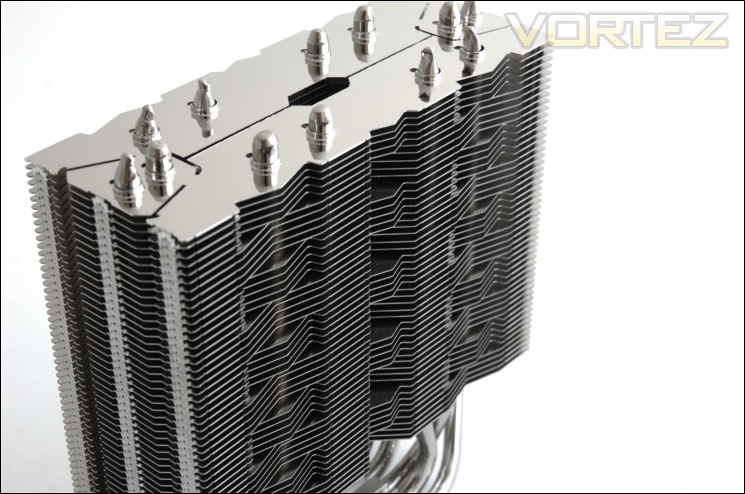 The fin array
The Himalaya continues Alpenföhns history of having unique fin arrays. We see here that the array is made of 10 five layered stacks where one set features triangular out-protrusions and the set immediately below features corresponding triangular cut-out. These not only increase turbulence to improve thermal transfer efficiency but also add to the visual appeal of the cooler. 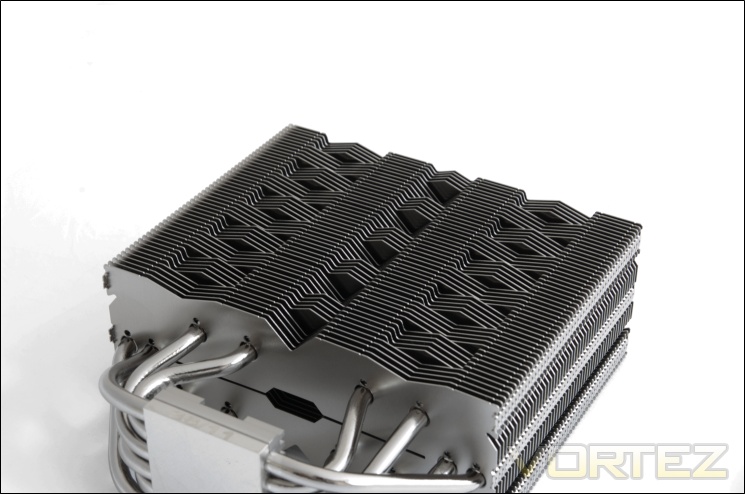 Distinctive fin design
From a different perspective, we see that the whole front face is actually flat in profile and the pattern does not protrude further than the linear flat areas. Its nice to see Alpenföhn coming up with designs unusual from the norm as it really distinguishes them from their competitors and gives them character. 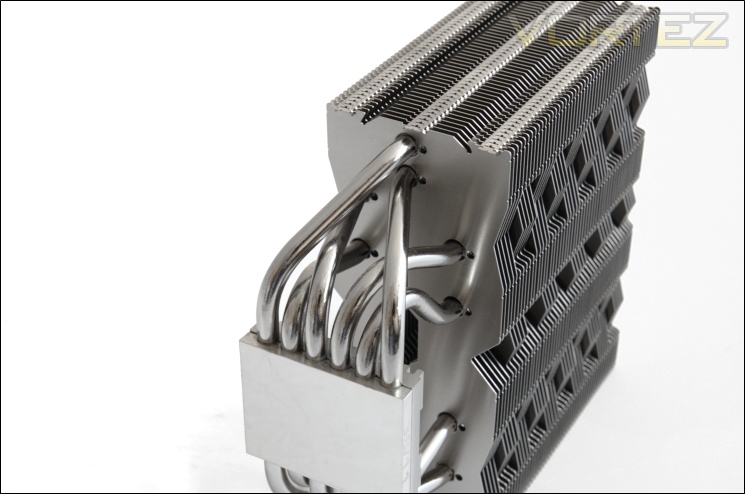 The heat pipes
The Himalaya sports six 6mm U-shaped heat pipes all connected directly to the copper base. These are bent in different shapes to produce three rows of heat pipes. The heat pipes are soldered to the base to improve heat transfer from the CPU. The two end heat pipes curve towards the outside edge of the heatsink such that they are immediately adjacent to each other. 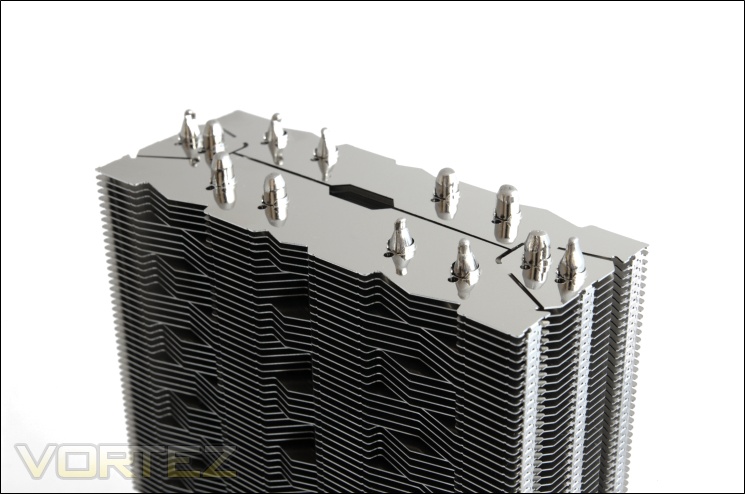 The heat pipe ends
Looking at the top layout of the heat pipe ends, we see three rows of 4. Half of the heat pipe ends are rounded while the other three are grooved at the tip. The top fin is characterised by a partition near the middle dividing the heatsink into two blocks, and separate partitions near the side edges each housing two heat pipe ends. The fin is also very reflective and prone to finger prints, a downside compared to the matt finish of the K2. The centre hole acts to improve airflow efficiency within the heatsink. The heat pipe distribution is very unique but it is not a very efficient design. Although they are oriented such a way that all are cooled by direct airflow, the two heat pipes at the side are too closely spaced to efficiently disperse the heat. There is limited fin surface area over which the heat can subsequently dissipate to. 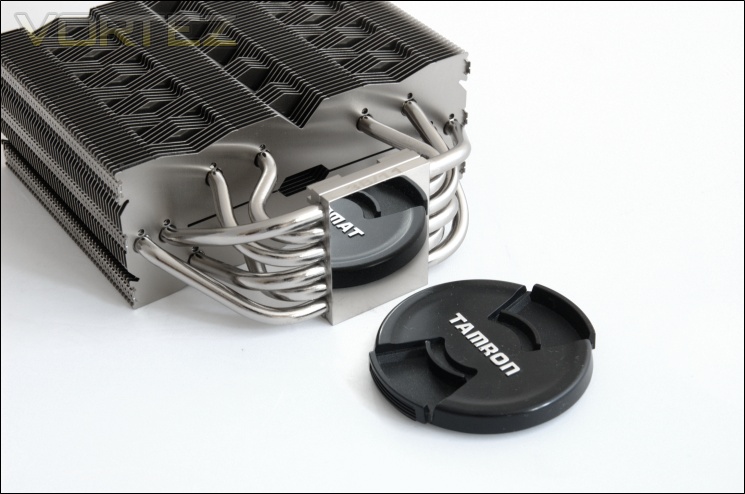 The copper base plate
The copper base has a perfect mirror finish thanks to CNC machining. Thankfully it is also a lot smaller than the K2s base so heat transfer more quickly to the heat pipes. 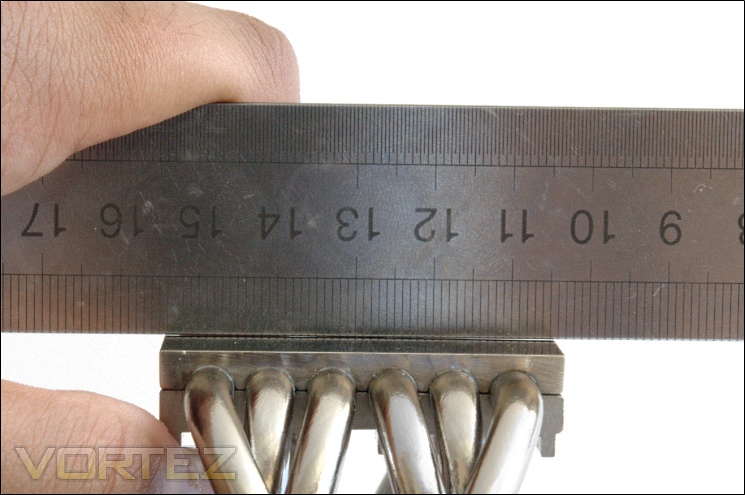 The flatness of the base
The base is ever so slightly convex with a tiny gap at the outer edge of the base. However, nearer the centre where the CPU will be placed under, the base appears to be quite flat. Certainly, it did a great job spreading a blob of thermal paste through pressure alone, indicating a flat surface.